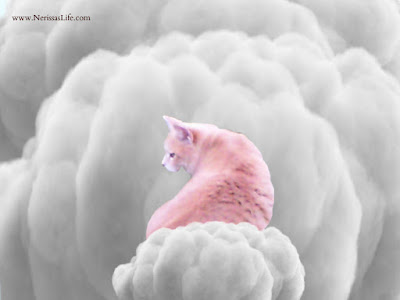 Previously, on Nerissa's Life:  Off in the distance, Seville thought he could see what appeared to be the end of the corridor.  Would the mysterious wizard be on the other side?  And why-oh-why did he live inside a cloud?  And more importantly, WHAT DID HE WANT WITH TWO CATS?  MOUSES!

The corridor came to a dead end but Mason clearly knew exactly where she was going.  Stepping toward the wall, she allowed one paw to disappear into its fluffy, cloud-like structure.  "Are you coming?" she called over her shoulder to Seville.  "He's waiting for us in there."

Seville watched his sister vanish, leaving nothing but pillowy soft clouds behind her.  "For mousin' out loud," he muttered.  "I'm gonna have to go in there after her, now, even though that's just about the last thing I was wantin' to do."

One of the cloud figures reached forward and poked a surprisingly sharp cloud finger in the small of Seville's back.

Emerging on the far side of the wall, Seville's paw nearly slid out from underneath him as he stepped on something slippery.  Looking down, he saw a small pool of water that had formed near the wall's edge.  He looked up again and saw that he was now standing in a large room, housing a number of long tables.  Upon each table, there was a globe, carefully balanced on a pedestal, showing various weather patterns on Earth.  Due to both the room's size, and the fact that the floor and tables appeared to be made of white marble, the same colour as the cloud-like walls, the room had a somewhat stark appearance.

Mason was on the far side of the room, engrossed in an animated conversation with someone.  "Could she be talkin' to the wizard?" Seville wondered aloud.  "Could that be him?"  Trotting toward Mason, he skidded on yet another wet patch.  "Whoever thought of usin' marble floors in a cloud that rains every time you walk through a wall, was missin' a few marbles, himself," he grumbled.  "Must be the most stupid thing, ever.  That marble sure does get slippery when wet.  MOUSES!"

"YOU'RE NOT A WIZARD," Seville stated.  He narrowed his eyes and wrinkled his nose.  "You look way more like a...  A...  A schoolkid or somethin'.  You don't look like a wizard at all.  Where's your robe?  Huh?  And do you even own a wand?"  Turning to his sister, he said, "Mason, I thought we were gonna meet the wizard, not some kiddo on summer holidays.  MOUSES!" 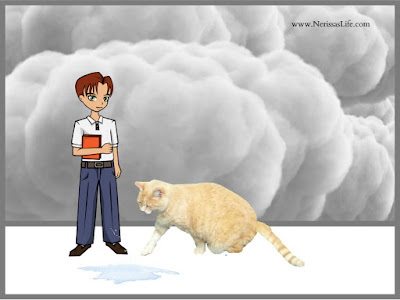 The young boy grabbed Seville by a paw and vigorously shook it.

Seville drew back.  "Watch it," he growled.  "It's bad enough to be poked and prodded by cloud figures, but to be manhandled, too?  Or rather, kid-handled, I should say.  MOUSES!"

"Enough of this mindless chitchat!" Mason exclaimed.  "We have work to do.  Jeremy, here, has been wanting to meet you because he's in need of your help, Seville.  He..."

"YES, HE IS."  Mason stamped a paw.  "Seville, this is going to take forever if you keep questioning everything I say."

"ENOUGH WITH THE STUPID QUESTIONS!" and Mason whacked Seville on his side with the end of her tail.

"Fine.  You don't have to yell.  And quit whappin' me.  It smarts as all get out," he added under his breath.  "My gosh, you're such a bossy sister.  How did I ever end up with a sister who thinks she's the boss of..."

"Wha?" cried Seville, taken by surprise.  He withdrew the paw he had, moments earlier, used to mindlessly spin one of the Earth-like globes precariously poised over the nearest table. 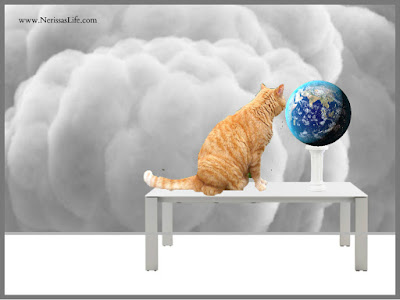 Without warning, the cloud the cats were in tilted violently to one side, causing the floor to slope, perilously.  Tables began to slide down the incline, alarm bells started to ring, Jeremy's chair, which was on wheels, crashed into the far wall, and several cloud figures materialised nearby.

Seville glanced about the room.  Seeing the chaos around him, he twisted his jaw to one side.  "Hmmm..."  Noticing Mason scowling at him, he asked in an innocent voice, "WHAT?  Don't scowl at me like that, Sis.  If they didn't want me playin' with their toys, they shouldn't have left 'em out here in the open.  You know, where I'd see 'em.  And play with 'em.  And stuff.  MOUSES!"

Be sure to tune in this comin' Sunday for Part IV of my latest adventure.  Purrs.

Posted by Seville at Nerissa's Life at 17:53