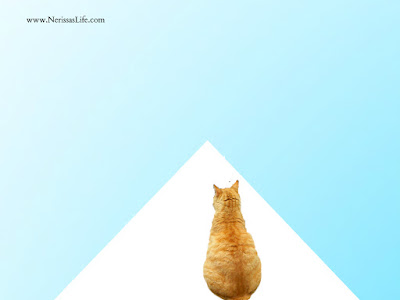 Previously, on Nerissa's Life:   The hand withdrew back into the cloud from whence it had come, carrying both cats along with it.  Off in the distance, Mason and Seville could hear Peep #1 calling their names once more.  Seville felt a tear roll down his cheek as he listened to the peep's cries growing fainter and fainter by the second.  Would he and his sister ever see Peep #1 again?

In response, the cloud figure pushed Seville once more, causing him to stumble over his front paws.

"I'm tellin' ya," Seville growled, "one more shove like that, and things 'round here are gonna get REALLY messy.  MOUSES!"

Seville studied the corridor down which he was being led.  The walls were padded with white and dark grey clumps of something familiar.  "Clouds.  That's what they are," he murmured to himself.  "The walls look like the edges of a cloud.  I must be inside the storm cloud."

Now remembering exactly what had happened earlier when the giant hand had grabbed him by the scruff of his neck, pulling Seville and his sister into the belly of the cloud, he looked about for Mason.  "Hey.  You.  Yeah, YOU!" he said to the cloud figure.  "Where's my sister Mason?  I want to see Mason right now."

Getting no response from the cloud figure but another shove forward, Seville reached a paw out to touch one of the corridor walls.  Although the wall looked solid, it wasn't, and his paw went straight through, disappearing behind white foam.  Withdrawing his paw, he noticed a small puddle form on the floor, directly below the spot he had touched.

"So uh...  So is this here some kinda Wizard of Oz sorta thing?  You know, like when Dorothy and Toto were transported off to the Land of Oz?  TAKE ME TO THE WIZARD!" Seville chuckled, thrusting a paw into the air.  "First though, I want you to take me to my sister.  Where is she?  I WANNA SEE MY SISTER, AND I WANNA SEE HER NOW."

Grabbing Seville by the shoulder, the cloud figure brought the cat to a stop.  The billowy hand pulled back on Seville's right shoulder ever-so-slightly, forcing him to face the right wall.  It then pushed Seville toward it. 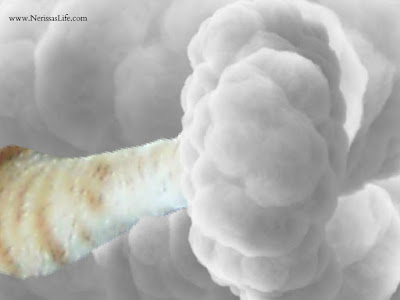 Just as Seville's paw had gone straight through the cloud-like wall earlier, he found his entire body could pass through the wall, and before he knew it, he and the cloud figure were standing in a room, completely empty, save for a large, golden, throne-like chair.  And on that chair sat...

"MASON!" Seville cried, excitedly, as he ran forward to where his sister sat.  Giving Mason a huge hug, he asked, "Oh my mouses, Mason, is it really you?  I was so worried 'bout you.  What are you doin' here in this room?"

Seville took a step back.  "Mason...  MASON.  Mason, are you like this cloud's wizard?  I mean, I jokingly asked the storm guy here to take me to the wizard, and where he brought me was straight to you.  MOUSES!"

Mason grinned from ear to ear.  "This place is great, Seville.  You ask for nip, and do you know what you get?  NIP!  I asked for a big plate of it, earlier, and you should have seen what they brought me.  The service here is incredible.  It's like a five star hotel!  These storm guys really know how to treat a cat right."

"Maybe for you," Seville grumbled, "but I haven't been treated all that well.  They've just been shovin' me around.  And I haven't been given a single nip leaf since we arrived, and boy-oh-boy could I ever do with some.  And..."

Seville interrupted himself by scratching behind an ear with a paw.  "Mason, just how long have we been in this here storm cloud, anyway?  You've had time to chow down on an entire plate of nip?  REALLY?  I thought we just arrived."

Mason waved Seville's worries off with a paw.  "Oh, we've been here for ages.  Couple of hours, at least.  You were unconscious when we first arrived."

"UNCONSCIOUS!" Seville cried out, indignantly.  "I MOST CERTAINLY WAS NOT."

"Well then you must have been napping," Mason stated.  "I had assumed you had knocked your head on something on the way up here, but maybe you simply decided to take a nap."  She scowled.  "I know you like your naps, but everything has a time and place, and.."

"FINE.  I was unconscious, then."  Seville looked about before asking, "So uh...  You think I could get some of that nip, too?"

"Probably not," Mason answered, wiping a little nip juice from the corner of her mouth.  "Now that you're awake, they'll," and she pointed to two cloud figures hovering near where Seville had been pushed through the wall, earlier, from the corridor, "They'll want to take us to see..."

Mason narrowed her eyes.  "Wizard?  WIZARD?  What is it with you and wizards, today?  No, they'll want to take us to see..."  Mason coughed, and lowering her voice she added, "You know, him."

"Who's him?  I mean, he?  You know what I mean."  It was now Seville's turn to lower his voice.  "And why are you suddenly whispering?"

"I don't know," Mason answered with a sing-song voice.  Hopping down from the chair, or throne, or whatever it was, she pawed her way across the room toward the cloud figures.  "Let's go," she told them.  "It's time for Seville and me to meet..."

"WHAT THE MOUSES ARE YOU DOIN'?" Seville yelled, grabbing his sister by the tail.  "You can't just waltz around here with these cloud people things.  For starters, they're pushy as all get out," he told her, rubbing the back of one shoulder where he had earlier received a particularly hard push.  "Plus, they don't answer any of your questions.  Actually, they don't appear to talk at all!"  Seville stepped back and looked closely at his sister.  "Mason, are you still high from that plate of nip they gave you?  Huh?  HUH?  HUH?  Well, ARE you?" 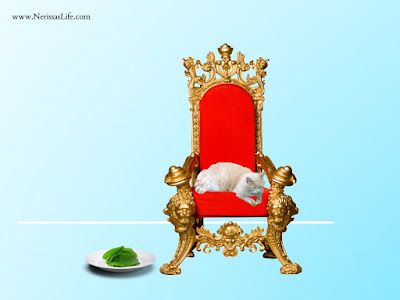 Mason waved off her brother's questions.  "All will be answered in good time.  Come on," and she grabbed Seville by a paw.  "It's time for us to go meet this wizard."

"Wizard.  WIZARD.  I KNEW IT!  I knew there was some kinda wizard lurkin' about 'round here," Seville muttered.

Moments later, Seville found himself being dragged through the cloud wall once more.  He and Mason were now heading down the very same long corridor he had travelled along before, but this time Mason was leading the way, instead of the cloud figures pushing him forward.  Seville did his best to keep a healthy distance between himself and the cloud people, just in case one decided to reach forward and give him another prod.

Off in the distance, Seville thought he could see what appeared to be the end of the corridor.  Would the mysterious wizard be on the other side?  And why-oh-why did he live inside a cloud?  And more importantly, WHAT DID HE WANT WITH TWO CATS?  MOUSES!

We interrupt our regular programming for...

As Canada Day falls on Nerissa's Life's next scheduled publishing day, Part III of our story won't be available this Sunday.  Instead, it will be broadcast, live, on Wednesday July 4th.  Please be sure to tune in, then.  MOUSES!

Posted by Seville at Nerissa's Life at 18:58