From inside the house, Mason called out to her brother.  "Seville!  Peep #1 says you have to come inside.  She says there's a storm heading this way."

Hearing what his sister has said, Seville looked up at the once blue sky.  Black clouds, heavy with moisture, were quickly approaching, and at the same time, the wind was picking up.  He shivered as the temperature suddenly dropped a few degrees.

"Tell her I need to finish waterin' my nip plants, FIRST!" Seville called back.  "I'll be in right after that."

"YOU TELL HER YOURSELF!" Mason yelled back.  "SHE SAID YOU HAVE TO COME INSIDE, NOW."

The wind had begun to howl, and Seville could barely hear his sister.  "WHAT?" he yelled out, but Mason had already retreated indoors.  Shrugging his shoulders, Seville went back to watering his catnip plants.  Moments later, a roofing tile flew past his head.  "Gosh, it really is gettin' stormy out here," he muttered.  "I had best hurry up and finish wa..."

Another roofing tile flew past, this one nearly smacking Seville in the head.  "HEY!  WATCH WHAT YOU'RE DOIN'!" he yelled out to no one in particular.  "Peeps aren't gonna be happy if they have to retile the roof.  MOUSES!"

Moments later, Seville noticed a dark shadow on the ground.  He looked up at the sky again, and saw a particularly ominous looking cloud stalled directly overhead.  "My gosh, if that thing lets loose, the rain will be torrential.  It'll be a deluge!  Perhaps I had best stop waterin' these nip plants for now," he murmured as he put the watering can down on the ground.

Seville stood there in the garden.  He looked up at the cloud once more.  It was huge.  Tilting his head to the right, and then to the left, he thought he saw something moving within it.  The cloud looked almost as if it had a face.  "Now that's weird," he thought aloud.  "Whoever heard of a cloud with a face?  Must be an optical illusion or somethin' like that.  Like the man in the moon, or..."

"MOUSES!" Seville yelled.  He watched in horror as what looked like a giant hand began to form at the outer edges of the cloud.  Slowly but surely, what appeared to be an arm attached to the hand, grew longer and longer and longer, reaching out toward where Seville stood motionless, paralysed by fear. 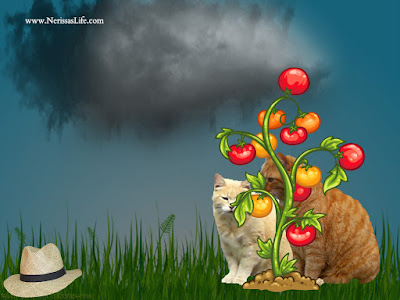 "LOOK OUT!" Mason cried as she came careening toward her brother.  She pushed him out of the way moments before the giant cloud hand could reach him.  "What the heck is that thing?" she whispered as the two cats crouched behind one of Peep #1's tomato plants.   "It looks scary.  I've never seen anything like it before."

The cats could hear Peep #1 calling to them.  Even though the peep was only as far away as the back door, her cries sounded far more distant, her voice being carried off in the opposite direction by the wind.

"Peepers is callin' us," Seville whispered to Mason.  "You think we can make a run for it and get to safety?"

Mason shook her head.  "Uh-uh, I don't think we should risk it.   We should stay right here, where we're hidden by this tomato plant."

Seville wrinkled his nose.  "Gosh these tomatoes are stinky things.  Gonna take me hours of washin' up to get the tomato stink out of my fur.  I'll take catnip over tomato plant leaves any time.  Don't know why the peep insists on growin' such stupid stuff when she could be growin' us nip."

Mason nodded in agreement but out of the corner of one eye, she kept watch as the giant hand attached to the storm cloud felt its way around the garden, giant fingers creeping along the soil.  She whispered, "That thing...  That hand...  It doesn't look very friendly.  It might grab us if we come out of hiding."

A few seconds later, the hand reached Seville's catnip plants.  Carefully, it picked one up, holding the plant between the tips of its fingers, dangling it in the air.

"YOU GIVE THAT BACK!" Seville hollered, revealing the two cats' hiding spot.

Responding to Seville's cry, the giant hand dropped the catnip plant.  Reaching over to the tomato plant behind which the cats were hiding, it pulled the plant right out of the ground, and flung it across the garden, fully exposing both cats.  It then grasped Seville by the scruff of his neck.

"HEY!  HEY!  LET GO OF ME!" Seville screamed.  He struggled to get out of the hand's grasp, but the hand was simply too big and too strong.  Moments later, Seville felt himself being lifted off the ground and into the air. 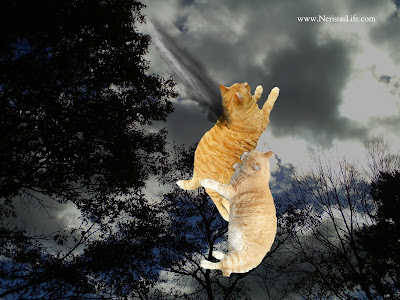 "YOU LET MY BROTHER GO!" Mason yelled.  "YOU LET HIM GO RIGHT NOW!"  Leaping up, Mason grabbed Seville around his waist, hoping the combined weight of the two cats would force the cloud hand to let them go.  Instead, the hand carried both cats higher and higher up in the air.  Mason held onto Seville for dear life, her claws digging into his marmalade fur.

Quickly and efficiently, the hand withdrew back into the cloud from whence it had come, carrying both cats along with it.

Off in the distance, Mason and Seville could hear Peep #1 calling their names once more.  Seville felt a tear roll down his cheek as he listened to the peep's cries growing fainter and fainter by the second.  Would he and his sister ever see Peep #1 again?

Be sure to tune in this comin' Wednesday for Part II of my latest adventure.  Purrs.