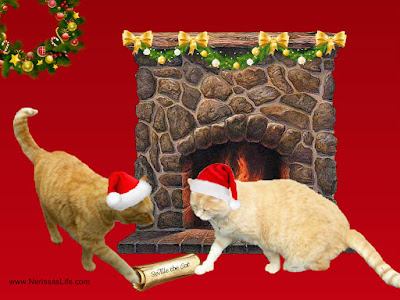 "You tell me, Seville.  It's a letter addressed to you. Well it's a scroll, actually. I found it lying here in front of the fireplace.  I think it came down the chimney."

"You're kiddin'!"  Seville padded across the family room floor and gave the rolled up piece of paper a good sniff.  It smelled old and musty with a faint, underlying aroma of sugar cookies.

And Mason was right about the scroll being for him, for Seville the Cat was written across it in black lettering.  "And you say it came down the chimney?  Never knew Canada Post started deliverin' mail that way.  Never knew they were deliverin' scrolls now at all!  MOUSES!"

"Why don't you open it up and see who sent it?" Mason suggested.  "It might be important."

Seville unrolled the scroll very gingerly, as it looked so old, he thought it might disintegrate if handled roughly.  "Hmmm..."

Mason rolled her eyes.  "I think it's safe to assume it's from the Big Guy in Red, all right.  And by the sound of it, he's in trouble.  Shall I prepare the teleportation device for two?"  And before Seville could argue about it, she added, "I'm going with you.  In an emergency situation, eight paws are better than four."

"Fine," Seville sighed loudly.  "You can come along.  MASON, PREPARE THE TELEPORTATION DEVICE.  I'll go pack up some snacks.  The North Pole is a fair distance away and one should never teleport snackless.  MOUSES!"

The two cats busied themselves getting ready for their trip up north, and within minutes, they were soaring across the Atlantic provinces in a north-westerly direction, heading straight for the pole. 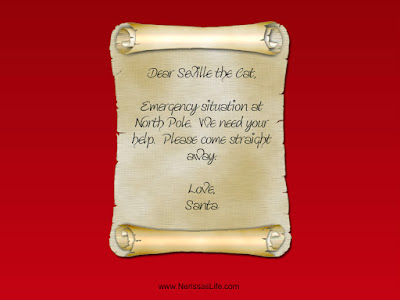 "Shoulda brought a scarf or somethin', I think," Seville shivered.

"Shoulda coulda woulda," muttered Mason.  "Next time, perhaps you'll think of bringing that instead of all these snacks."

"Don't mind if I do," and Mason popped one into her mouth before reaching for a second.

"There it is!" Seville cried as he spotted Santa's workshop down below.  "I'll bring us down next to the reindeer barn."

"HOLD ON TIGHT!  THERE'S AN UPDRAFT OR SOMETHIN' GOIN' ON HERE," Seville hollered. "By gosh and by golly, between all the radioactive reindeer dust and Santa's magic flyin' around, weather patterns at the North Pole create a mousin' lot of turbulence.  Landin' can be dicey at best. We'll be lucky if I can land this here flyin' fryin' pan within..."

The cats' teleportation device hit the snow with a thump, but their velocity was so great, they slid several meters, picking up speed on an icy patch.  Seville hoped the snowbank up ahead would bring them to a stop but instead, the frying pan glided up its side, and before they knew it, they were airborne once again.

"MASON!  WE'VE GOT RADIOACTIVE REINDEER DUST IN THE FORWARD EGGBEATER.    BRUSH SOME OF IT OFF SO I CAN LAND THIS THING!!!"

"THE DUST HAS FROZEN ONTO THE BEATER, SEVILLE.  I CAN'T BRUSH IT OFF!"

Mason managed to circle back once Seville had dealt with the frozen radioactive dust.  "How did you get rid of it?" she queried.

"Did what I had to do," Seville answered smugly.  "Good thing I'm a good aim when I spray." 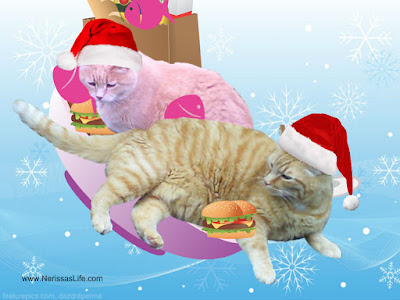 Santa's magic was still creating a lot of turbulence, and Seville had a hard time keeping the teleportation device steady.  It veered unexpectedly to the right, and then swung back, hard.

"We're down.  We've landed.  Whew!  That there was a close one, for sure," Seville sighed with relief.

Mason peered over the edge of the device.  "Uh, Seville.  You landed on top of the barn."

"But you're not Santa Claus!" Mason cried, flinging her paws up in the air.

"No, he is!" and Seville smiled as he saw Santa approaching.  "Come on Mason.  Let's go ask him why we were summoned."

Seville jumped down from the barn roof, onto the snow below, with Mason at his heels.

"Are you sure?  Are you SURE?" Seville asked Santa.

"I'm as sure as sure can be, little guy."  Santa scratched behind one ear.  "And for the life of me, I can't figure out what to do about it.  Nor can Mrs. Claus.  You're our last hope, Seville.  And if you and your sister can't find an answer, there will be no Christmas for all the little boys and girls around the world."

"Not to mention the cats," Seville murmured under his breath.

"Or the cats, either," Santa nodded. 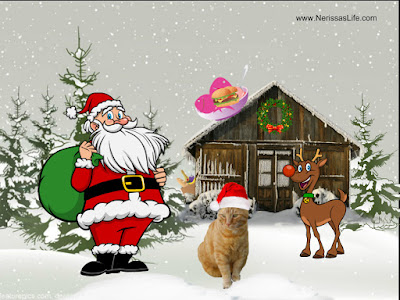 "But are you absolutely sure Rudolf even has the cold?" Mason asked.  "I know his nose is all red and puffy but doesn't it always look like that?

"Yeah," piped up Seville. "How is Rudolf's nose different from any other time?"

As if in answer, Rudolf sneezed, spraying radioactive reindeer dust all over Seville.

"YUCK!  Okay, okay, I get the picture.  You don't have to sneeze on me twice!  Rudolf, you've got a nasty cold, for sure."  Seville patted the reindeer on his back.  "It's okay there, little buddy.  Mason and I will figure somethin' out.  We'll have you flyin' again, in no time."

Be sure to return on Christmas Day for the conclusion of our 2016 Christmas adventure!

Posted by Seville at Nerissa's Life at 18:19