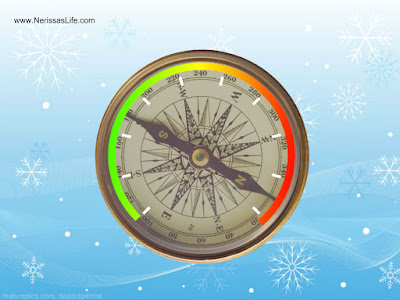 Previously on Nerissa's Life...  Seville patted the reindeer on his back. "It's okay there, little buddy. Mason and I will figure somethin' out. We'll have you flyin' again, in no time."


"Now first things first," continued Seville.  "I need to check on the radioactivity of your reindeer dust.  Make sure it's behavin' like it's supposed to be behavin', you know?  Mason," he called out to his sister. "Go grab my radioactive reindeer tracking compass, would you?  It's in the teleportation device."

"But the teleportation device is parked - if you you want to call what you did, parking - up on the barn roof!" Mason exclaimed.  "I don't want to climb up there any more than is absolutely necessary.  I had my claws manicured for Christmas."

Moments later, Seville returned to find Mason, Rudolf, and Santa all staring at him in disbelief.

"Why are you all starin' at me?" asked Seville.  "Do I have freeze-dried salmon treat crumbs on my face or somethin'?"

"Well as a matter of fact, you do," Mason answered.  "But that's beside the point.  Seville, when you went to get your compass, you..."

"Well I was in a hurry so yeah, I was bein' speedy as speedy can be.  It's not like I flew up there like a reindeer or somethin'," Seville laughed.

Mason padded over to her brother.  Putting a paw on Seville's shoulder she whispered, "Actually, you did.  You flew up onto the roof exactly like a reindeer would do." 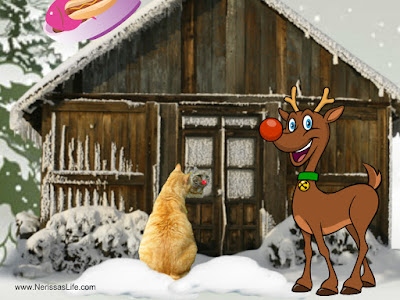 "I DID?" Seville cried. Dashing over to one of the barn's frosty windows, he rubbed the glass pane until it shone like the glass of a mirror.  Peering at his reflection he exclaimed, "Oh.  My. Mouses.  My nose is startin' to glow.  I'm... I'm...  I'm...  I'M TURNIN' INTO A REINDEER RIGHT BEFORE MY VERY EYES."

"Well I wouldn't go quite that far," stated Santa, "but your nose is developing a rather healthy glow."

"NO!!!" wailed Seville.  "How am I ever gonna explain this to the peep?  Will my fur-sibs still let me play in any catnip games?  This is a catastrophe of catastrophic proportions!!!"

Mason followed Seville over to the barn window, carrying the radioactive reindeer tracking compass in her paw.  "Seville, the meter is registering radioactivity through the roof, no pun intended.  If you're not careful, it's not just that nose of yours that will be glowing."

"Er-hmm..." began Rudolf, hesitantly.  "Seville, perhaps YOU could guide Santa's sleigh tonight.  Do you feel up to that task?"

"Lemme see that compass," and Seville snatched it from Mason's paw.  He passed it over Rudolf several times before doing the same, over himself.  "Yup, Yup.  Just as I thought.  MOUSES!"

"Well are you going to explain it to the rest of us?" asked Mason.

Seville glared at his sister.  "Hold your horses...  Or should that be reindeer?  You know, 'cause we're at the North Pole and all and...  No matter.  Here goes," and Seville explained that with Rudolf's cold, he had been sneezing a lot, and each time he sneezed, he was expelling radioactivity in greater quantities than what he normally lost due to typical shedding.  More importantly, he was expelling his radioactivity more quickly than his body could replenish it.  With an insufficient amount of radioactive reindeer dust, Rudolf was losing his ability to fly.

"But how is that you can fly now?" Santa asked Seville.

"Not as obvious as your nose," Mason said with a smirk.

Seville shot a cutting glance at Mason.  "Remember?  Remember how Rudolf sneezed on me? That sneeze must have covered me in radioactive reindeer dust!  It was only after that, that I started to fly."  Seville stamped a paw in the snow with such force that he gently floated upward, hovering about a foot in the air.  Mason grabbed him by the tail and pulled him back down.

"So if I stop sneezing, I'll be able to fly again?" Rudolf asked.

"Probably," answered Seville.  "But with that cold of yours, I don't think we can count on your not sneezing, any time soon." 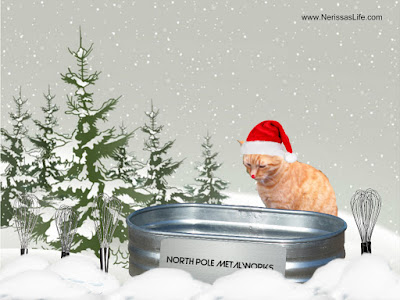 "I think what we need to do is make you sneeze even more."  Padding over to Rudolf, Seville used his paws to quickly estimate the reindeer's size and body weight. "Santa, I'm gonna need six wand toys with feathers.  And Mason, go ask Mrs. Claus for ground black pepper.  Half a pound should do, give or take an ounce.  And Rudolf, you just hang tight while I fly back up onto the roof and grab those spare eggbeater parts I brought with me."

Santa returned from his workshop with six feather wand toys in tow, and Mason returned from the Claus' house with several jars of pepper.  They found Seville piling snow into a water trough he and Rudolf had managed to drag out of the barn.  Once filled with snow, Seville blasted it with a blow torch.

"Where'd you get the torch?" asked Mason.

"I didn't pack only snacks," Seville replied.  "Brought this, just in case.  Along with these eggbeaters," and he pointed to a row of beaters standing upright in the snow, alongside the trough."

"But how are eggbeaters and wand toys and pepper going to allow me to fly again?" Rudolf queried.

"Hold on there, little buddy.  Mason, start sprinklin' those wand toys with the pepper.  Santa grab a couple of 'em and brush 'em up against Rudolf's nose."

"That's it, Rudolf!  But when you sneeze, MAKE SURE you sneeze into the trough of water.  Mason, you and I need to tickle Rudolf's nose with the peppered wand toys, too."

"Excellent!" cried Seville.  "Now Rudolf, you keep on sneezin'.  Santa, you keep ticklin' Rudy's nose with the wand toys.  Apply more pepper if needed, okay?  Mason, you and I need to start dipping these eggbeaters into the water in the trough.  Swirl 'em around for a minute or so, makin' sure they gather up lots of radioactive reindeer dust, then stand 'em upright in the snow.  I need the radioactive water on 'em to freeze.  Rudolf?  Try sneezin' right on the treated eggbeaters for a bit, too.  Just for good measure."

Within the hour, Seville's eggbeaters were covered in a thick layer of icy frozen radioactive reindeer dust.  The cat stood back to admire his handiwork.  "That should do the trick.  Santa, I think you're pretty much good to go."

"All I need are these eggbeaters?" asked Santa.

"Yup," answered Seville.  "We'll attach 'em to your sleigh and they'll boost power to whatever radioactivity Rudolf still has left, allowin' you at least one trip 'round the world.  By the time you need to deliver prezzies again next year, Rudolf should be over that cold."

"Bless you," said Mason, patting the reindeer on his back.

Santa stood, shaking his head.  "Looks like you've saved the day there, Seville."

"One might even say I saved Christmas, huh?" and Seville smiled at Santa.

"Well it's time for you and me to get back home, Seville," declared Mason.  "We need to be in bed and asleep before midnight, so that when Santa arrives in Nova Scotia, he can leave us our presents under the tree." 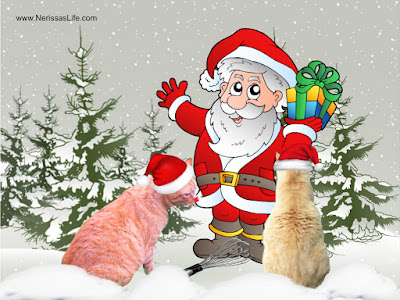 "Make sure you dispose of those peppered up wand toys, okay?" Seville whispered in Santa's ear. "No cat is gonna want to play with 'em now."

Still covered in radioactive reindeer dust, Seville took Mason by the paw, and together, they flew up onto the barn roof. Revving up the teleporation device, Seville waved down at Santa.  "See you in a few hours!" he cried.

Posted by Seville at Nerissa's Life at 18:26