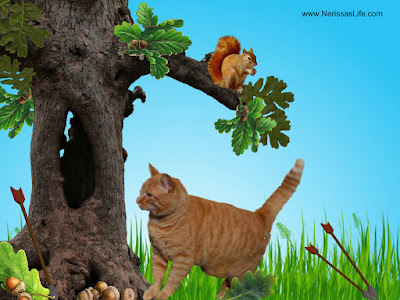 "What the mouses?" Seville cried as an arrow flew past him, narrowly missing his head.

"Who the mouses is shootin' arrows at me, from that ol' oak tree at the end of my driveway? What kind of ornery character would do such a thing?  A weasel?  It sounds like somethin' a weasel would do, for sure."

"WATCH OUT!" Mason yelled as a second arrow whizzed past Seville's head.

Spread eagle on the driveway, Seville cried out to his sister, "The weasels are shootin' arrows at me.  Or maybe it's the squirrels.  HELP!"

Mason ran to her brother, grabbed Seville by his tail, and hauled him onto his paws.  "I don't think so, Seville.  At least if they are, they have the worst aim in the history of...  Of...  Of aiming!."  The two cats watched as three more arrows shot out of the tree.  Luckily, these ones didn't come anywhere near either one of them.  "Besides," Mason added, "the Weasel Syndicate has been rather quiet as of late, and the squirrels around here are more likely to use slingshots armed with acorns, than arrows."

Seville nodded.  "True.  Hmmm..."  He approached the tree, jumping back as another arrow whizzed past.  "Now that's odd.  Never noticed that before."

"Is that some sort of hollow in the tree?" asked Mason as she crept up behind her brother.  "Was that there yesterday?"

"To tell you the truth, I don't think it was there this morning!"  Both cats jumped back as one more arrow flew out of the tree's hollow.  Seville looked at his sister.  "Mason, those arrows aren't comin' from the tree.  They're comin' out of it.  It's not the squirrels shootin' at us.  It's the tree, itself. MOUSES!"

"Don't be silly, Seville," Mason scolded.  "Trees don't shoot arrows.  At least I don't think they do." She paused.  "Well I've never heard of them doing anything like that.  I've..."  She stopped short as another arrow shot past.

"Well someone is shootin' arrows and that, sis, is a fact.  Somebody from inside that tree."  Seville put his front paws on his hips and firmly stated, "I'm goin' in."

"That's not a good idea, Seville.  There's no telling who you'll find inside that tree.  Or what, for that matter," and she grabbed her brother's tail and pulled him back.

"Let go of my tail!" Seville demanded as he peered inside the tree's hollow.  "Mason, it's a whole lot bigger inside here than you'd think.  It's like...  HUGE."  Huge, huge, huge...  his voice echoed. "Who would have thunk the inside of a tree could be so much bigger than the outside?  And is that..."  He leaned over the edge of the tree's hollow, trying to get a better look at what had caught his attention.  "Is that..."  He leaned over some more.  "Is that..."

Losing his balance, Seville slipped forward.  "Mason, get me out of here!" Seville yelled.  "I'm losin' my pawhold!"

Mason grabbed her brother's tail again.  Leaning backwards, she attempted to pull Seville out of the tree's hollow, but it was to no avail, for Seville was the much heavier cat.  She braced her back paws on the outside of the tree, holding onto Seville's tail for dear life, and pulled again.  Her brother's tail seemingly stretched like a bungee cord might, and Seville dangled in the abyss of the hollow.  "PULL HARDER!" he cried frantically.  "YOU'RE NOT PULLIN' HARD ENOUGH!"

Mason held on tightly and pulled backwards with all her might, but it was of no use.  Seville wouldn't budge.

Then disaster struck.  Mason lost her footing on a loose piece of bark, causing her to stumble forward.  Seville dropped further into the hollow and Mason, still holding onto her brother's tail, was dragged into the opening herself.  Before they knew it, the two cats were in free fall. 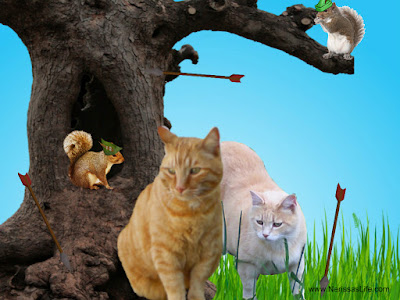 Down, down, down, they went.  Down further than they could ever have imagined, for the hollow within the tree was so very much larger than the oak tree itself.  After what seemed like an eternity had passed, they landed with a thud on a dirt floor, Seville first and Mason, seconds later.  Seville somersaulted forward and passed through an opening directly ahead. Mason scrambled to her paws and quickly scampered after him.

Be sure to come back on Wednesday for part two of our adventure.  PURRS.

Posted by Seville at Nerissa's Life at 19:01