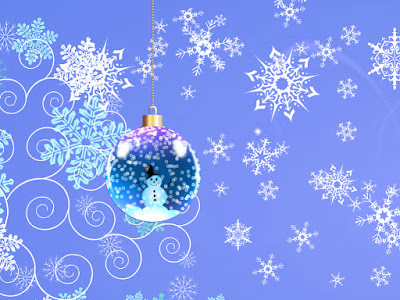 Seville sat back on his haunches and gazed up at the Christmas tree. "Lovely," he purred. "Peeps really outdid themselves this year. Everything's all pretty and sparkly.  Bet Santa's gonna be really pleased when he stops by on Christmas Eve."

"Oohhh...  That one's new," and the cat approached the tree. "I've never seen that ornament before.  Wonder where it came from."  He examined the glass ball hanging from a bottom branch.  "Just look at that.  Someone managed to create an entire little snow scene in there.  Amazing detail.  And it even has sound effects.  Is that wind I hear howling from inside?"

"Hey Mason!" and Seville cried out to his sister.  "Come see this new ornament the peeps put on the tree.  You know where it came from?"

Mason padded across the room.  "No, I've never seen that one before," she told Seville.  "The peeps must have bought it this year.  Kind of pretty."

"It sure is," Seville agreed.  "It looks so real.  OH MY MOUSES!" and Seville jumped backwards. "Mason, I touched it with my nose and it's freezing cold.  You try."

Mason reached out a paw to touch the ornament lightly.  There was a spark of light and she, too, jumped backwards.

"What the mouses is going on?" asked Seville.  "This needs investigating, to be sure."

Once again, Seville sniffed at the glass ball hanging from the tree.  His nose grew cold.  The ornament appeared to be enveloped by a pocket of frigid air.  Very gingerly, he touched the surface of the ball, fighting the urge to draw back from the cold.  Coloured lights began to flash about him and he felt a cold, icy wind ruffling his fur.  "Mason..." he cried and felt his sister tugging on his tail.

Seville somersaulted forward.  Over and over he went until eventually, he landed in a pile of snow. "MOUSES!"  Chewing on his lower lip he muttered, "Fine mess I've gotten myself into this time."

"Fine mess you've gotten us into," Mason fumed, spitting some loose snow out of her mouth.  "Why did you have to go and get us sucked up into that glass ornament?"

"Is that what happened?" questioned Seville, scratching the back of his head.  "Never knew an ornament could do that kind of thing.  Where do you suppose we are?"

Mason pursed her lips and narrowed her eyes.  "Where we are, is inside that darned glass ornament.  A better question would be how are we going to get out.  MOUSES!"

"That's my line," Seville pointed out to his sister but seeing the look on her face he added, "Uh, never mind."

The two cats decided to head towards a building they could see off in the distance.  The temperature was dropping quickly and the wind had picked up, whipping snow about them and creating almost blizzard-like conditions.  "Gotta keep going,  gotta keep going," they chanted.  They both knew that staying out in the cold wasn't an option.  A cat could freeze being exposed to such winter temperatures. 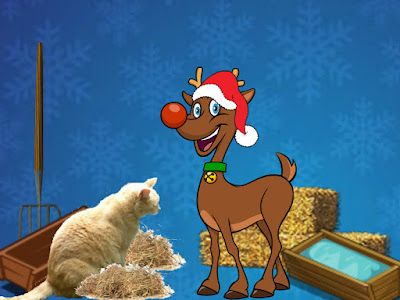 Almost at the building, they could see it was some sort of barn.  A bright light shone from within, assuring them it was occupied. Mason and Seville picked up their pace, desperate to get out of the cold.  Seville pulled open the door and they both dashed inside.

"You heard me!" a young reindeer cried with relief. "Thank goodness you've come to my rescue."

"Your rescue?" asked Seville. "Wait a minute... Wait a cotton picking moused-up minute...  I know you.  You're Rudolf!  MOUSES!  What on earth are you doing here?"

"I'll explain while you untie me," answered Rudolf.  "Please hurry before they return."

After listening to the reindeer's tale, Mason spoke up first.  "So you're saying that evil snowmen captured you and locked you up in this barn?" she asked skeptically.  "It sounds kind of far-fetched, Rudolf.  Are you sure you haven't been indulging in the eggnog or nip or whatever it is that reindeer like?"

But before Rudolf could deny Mason's accusations, the door to the barn opened and a gust of wind sent snow spiralling throughout the building.  There, standing inside the door were two snowmen, one of whom let out an evil laugh.  "Another two captives.  Wonderful!" the other cried.

"Oh no!" Rudolf wailed.  "Now I'll never get back to the North Pole in time for Christmas.  What will Santa do?"

Having had the chance to warm up a bit, Mason pulled herself together to demand some answers from the snowmen.  "Why did you kidnap Rudolf and hold him captive?" she queried.

"Wouldn't you like to know," one of the snowmen answered in a sinister voice.

"Well as a matter of fact, I would," Mason replied.

"And I would, too," added Seville.  "And a word to the wise, if I may.  You really don't wanna get my sister angry.  She can have a bit of a temper, you know.  She's super smart, too.  Not a great combo to be on the wrong side of, if you know what I mean."

One of the snowmen bent over, peering closely at Seville.  "Are you threatening us, little cat?  I don't think you're in a position to threaten either one of us."

"Well then," and Mason tried again, using a different tact.  "As you're clearly in charge here, I'm sure  you won't mind explaining why you kidnapped our friend, Rudolf."

"Because," the smaller of the two snowmen sneered, "we're sick and tired of hearing how much everyone loves Santa and his reindeer, not to mention those pesky little green elves.  Santa this, Santa that.  To hear them, you'd think he was the most wonderful thing on earth.  No one ever talks about us snowmen like that."

"Ummm...  the elves aren't actually green," piped up Seville.  "They merely wear green clo..."  Mason cut Seville off with a thwack of her tail to the back of his head.

"What my brother is trying to say is... Well...  Well never mind what he's trying to say.  It's not important.  What is important is that Rudolf has a very important job to do on Christmas Eve and he can't do it if he's being held hostage by the two of you.  You have to let him go.  And us, too," she added hastily.

"Ha!" the snowmen both cried.  "You're not going anywhere until after Christmas.  When Santa doesn't deliver any toys to any of the little girls and boys, they'll start seeing that old man in red in a very different light." 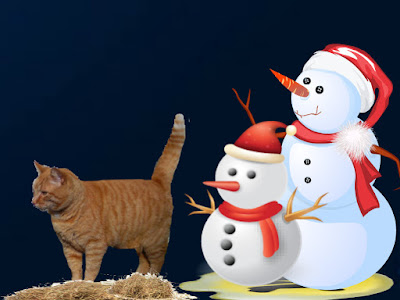 Rudolf stood to his full height.  "Oh yeah?  Well Santa will show you. Even without my help to guide him, he'll still get those presents delivered."

"It'll never happen," the smaller snowman sneered.  "Didn't you hear?  There's going to be a terrible blizzard on Christmas Eve.  Without you, he'll never find his way."

The two cats and Rudolf stood there, not knowing what to say.  Seville gathered his thoughts, first.  "You're just a couple of big ol' meanies," he declared.  "Is that why you hate Santa so much?  Were you always on the naughty list and never got any presents?  Because you know, acting like you're acting right now would get you on Santa's naughty list, for sure.  I mean..."

"QUIET!" one snowmen yelled.  "You'll be quiet if you know what's good for you, cat.  Keep on talking like that and we'll never let you go.  Not even after Christmas is past," he smirked.

"I've heard enough," declared Mason.  "Seville, you know what you need to do."

"No, seriously Mason," and Seville whispered in his sister's ear.  "I don't think I do.  Can you give me a hint or something."

"Oh for crying out loud," and Mason flung her front paws up into the air.  "Don't you remember what happened to that snowman you and Nissy made a couple of years ago?  You know the one.  After you made it, you boys thought you'd mark it as your own and..."

"Oh yeah," and Seville grinned broadly.  "I remember now," and turning, he lifted his tail and began to spray.

"Great work!" and Mason slapped her brother on his back.

"But we still need to get out of here," said Rudolf.  "I need to get back to the North Pole before it's too late."

"I have an idea," and Seville opened the barn door wide.  Turning his back to the blistery weather outside and lifting his tail, once again, Seville began to spray.

The three friends heard crackling sounds.  They were fairly faint at first but then became louder and louder until with one final deafening crack, the cats and Rudolf tumbled through the snow and out of the broken glass ball, landing on the cats' living room floor. 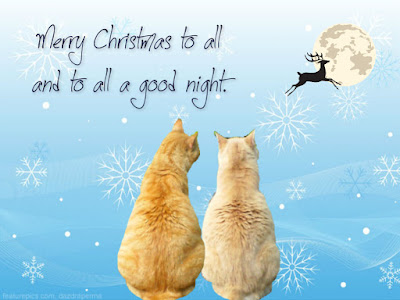 "Mouses, indeed," agreed Rudolf and drawing to his feet, he shook off some snow from his back. "Sorry about the snowy mess," he apologized, "but I've really got to go. Santa will be waiting for me."

"Of course," answered Seville.  "You had better fly back, right away. Mason and I will clean up this mess before the peeps see it.  Promise."

Rudolf trotted to the front door but before flying off, he turned to face the two cats once more.  "Thank you for coming to my rescue, you two.  I'll be sure to let Santa know and, I suspect, you'll find extra nip in your stockings this year."

Mason and Seville watched as Rudolf took flight and waving to him off in the distance they whispered, "Merry Christmas Rudolf.  Merry Christmas to all and to all a good night."