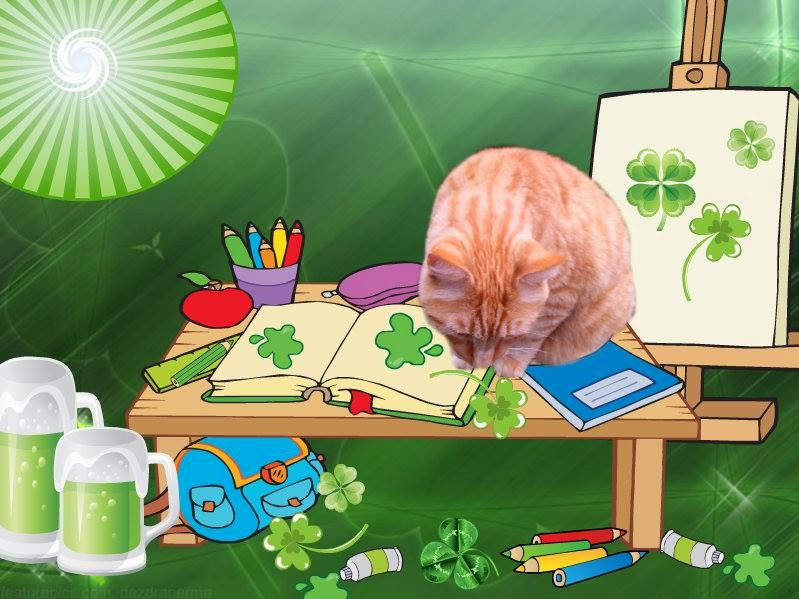 Nissy softly padded into the kitchen, only to find his brother Seville up on the table, surrounded by a mess of glue, paint, workbooks and other assorted paraphernalia. "Whatcha up to there, Sivvers?" he asked.

Only half-listening to his brother, Nissy continued over to the fridge and poured himself a cold mug of nip beer.  "Uh-huh...  I see. WAIT A MINUTE," and he stopped in his tracks.  "Did you say you were super gluing clovers together?"

"Yup.  Not working out all that well, though.  They keep fallin' apart.  Plus, I think I accidentally super glued some stuff together I didn't actually mean to super glue together.  FYI, don't sit in that chair over there," and Seville pointed to one of the kitchen chairs with his tail.  "And I wouldn't jump onto the stool, either."

"MOUSES!  Why on earth are you super gluing together clovers?" Nissy questioned.

"Well, I tried hot gluing them together but the glue kept melting the leaves," answered Seville.

Nissy shook his head furiously.  "Not what I meant, Sivvers.  Perhaps I didn't word that well.  I wanted to ask, why on earth are you workin' with the clovers in the first place?"

"Peep #1 said she'd really like to find a four-leaved clover 'cause they're supposed to be lucky and I thought I would give her one for St. Patrick's Day, tomorrow."

"Hmmm..." Nissy pondered.  "I think they're only lucky if they grow that way naturally.  I'm not sure that the luck sticks if they're glued together."  He picked up one of Seville's supposed four-leaved clovers and a leaf fell off.  "Apparently your glue isn't stickin', either.  I thought super glue stuck to everything.  That's why Ol' Peepers is always tellin' us cats to keep away from it.  You know...  in case it sticks to our fur."

Nerissa noticed the marker and exclaimed, "You sat on it?"

"Yeah...  I spilled some glue on the marker and the rest is history."

"MOUSES!  Seville, Ol' Peepers is gonna be furious when she sees this mess."  Nerissa took a sip of his nip beer.  "And may I ask why there's an open time vortex in our kitchen?  You been messin' with whisks again?"

Seville glanced over at the vortex.  "Oh...  that.  I needed some clovers for my work and, in case you hadn't noticed, there's still snow on the ground outside.  Needed to make a quick trip to July to pick up a supply of the stuff."

"Makes sense, I suppose," and Nissy nodded in agreement.  "But how come the vortex is still open?" 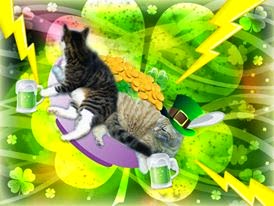 "I might have accidentally glued it open.  I didn't realise I had spilled super glue on that whisk..." and Seville looked away, somewhat shamefully. "Not quite sure how to fix that yet."

"MOUSES!" Nissy cried.  "The peep is gonna explode when she finds out we've got a permanently open time vortex in the kitchen.  You're gonna have to find a way to close that before she sees it."

"I was sort of hoping she wouldn't notice," explained Seville.  "And if I can just get these clover leaves to stick together, maybe even if she does notice, she'll be so happy about the lucky clovers that she won't freak out too much about the vortex."

"I've got a better idea, Sivvers.  Why don't we just teleport on over to the Emerald Isle..."

"And run away before the peep finds out about the permanently open time vortex in the kitchen?" Seville interrupted.

"No," and Nissy looked pointedly at his brother.  "I was gonna suggest that we teleport on over and grab some REAL four-leaved clovers.  Ones that might actually be lucky.  I've heard that leprechauns grow them by the millions.  Shouldn't be too difficult to find a few there."

"I don't know," Seville hesitated.  "The peep said we weren't to do any more teleporting after the trouble we caused in Ottawa at the Worldwide Weather Offices, Forecasting and Control, Canadian Division."

"Seville, you've permanently glued open a time vortex in our kitchen!" and Nissy slapped a paw on the table.  "A little teleporting is nothin' compared to that.  Trust me.  SIVVERS, PREPARE THE TELEPORTATION DEVICE."

Moments later, the two cats were hurtling through space and time on their way to a heavily leprechaun-infested area of Ireland.  Thinking ahead, Nissy grabbed some gold coins to cover any tariffs the leprechauns might demand as he was well aware that leprechauns are notoriously anti free trade.

After a surprisingly smooth landing, Nissy and Seville hopped out of the frying pan teleporter and onto a lawn of lush green grass.  Seville nosed about in the grass hoping to find a clover or two but, unfortunately, he found nothing but grass.  Nerissa grabbed a paw full of the stuff and started chewing. "That last mug of nip beer gave me the munchies," he explained to his brother.

"Where do we find the clover?" Seville asked.

"Let's ask around in that pub over there," suggested Nissy.  "Someone is bound to know about the clover farms, there."

The pub door closed behind them.  "Perfectly normal pub," Nissy muttered sarcastically.  He glanced around, seeing groups of leprechauns gathered here and there, sipping beer and doing jigs.

A fairy darted past Nissy's head, sprinkling fairy dust over him.  "Hey!  Watch it with that stuff," and Nissy shook himself violently while Seville took a swipe at the fairy, narrowly missing a wing. "Don't annoy the fairies, Sivvers," Nerissa told his brother.  "Not a good idea."

Nerissa boldly walked up to the bar and ordered two nip beers.  Paying for the beer with a gold coin, he asked in a low voice, "We're looking for four-leaved clovers.  Anyone here who might be able to help us out?"

The fairy was back, hovering by Nissy's ear.  "I can take you to a clover farm, if you like.  But you'll have to tell the orange cat to keep his claws to himself." 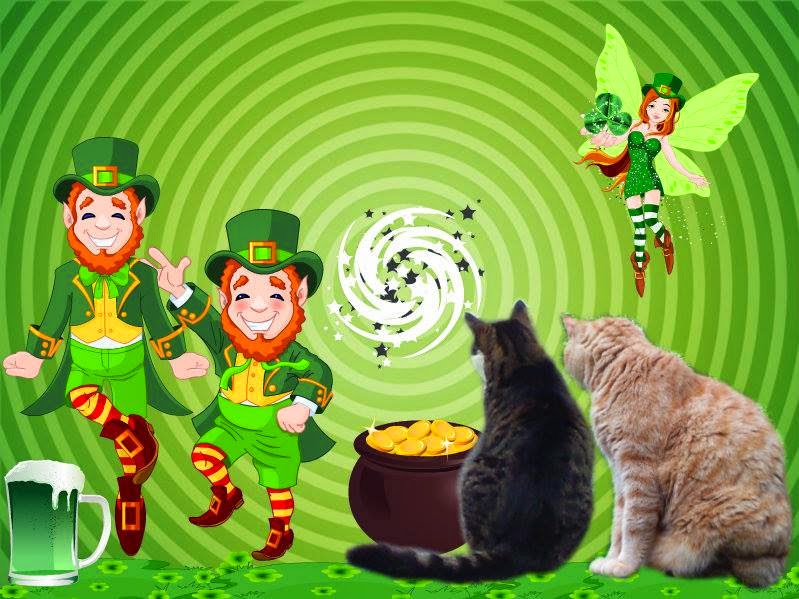 "Deal!" squealed Nissy with delight. "Hear that, Sivvers?  We'll get you those clovers in no time."  Turning back to the fairy, Nissy quickly explained the situation and why the cats were in dire need of the four-leaved clovers.

Suddenly and out of nowhere, a vortex of some sort opened in the corner of the room.  "The clover field managed my Sean and Seamus O'Reilly is on the other side," explained the fairy.  "Follow me."

"How did you do that?" asked Nissy, suspiciously.  "How did you open a vortex without an egg beater or whisk in sight?"

"They use magic," hissed a nearby leprechaun.  "Don't question their means.  Just do what she says and you'll be fine."

Nissy briefly wondered if the vortex was some sort of trick but desperate times called for desperate measures and the cats were pretty desperate for a paw full of four-leaved clovers.  He watched the fairy disappear into the vortex, grabbed Seville by the tail and together, they followed her through.

The other side of the vortex proved to be a beautiful, sunny lawn.  Small white, daisy-like flowers were growing here and there and although quite pretty, there wasn't a farm in sight.  Nissy questioned the fairy about the clover farm.

"Take a closer look at the grass," the fairy suggested.  "You'll find what you're looking for, there."

The boys nosed about in the grass and, sure enough, there were clovers everywhere.  The lawn was the farm, Nissy realised and what a clover farm it was.  A very high percentage of the clovers growing there were of the four-leaved variety.

"But I don't have any boots," Seville sadly replied.  "I never wear the things."

"It's just an expression, Sivvers.  Oohhh...  but you can fill that hat with clover.  Just pick the four-leaved ones and put 'em in your hat for transport.  You start picking and I'll go make a deal with those two approaching leprechauns.  They must be the O'Reilly brothers."

Nissy worked out a deal to trade the gold coins he and Seville had brought with them for two hats worth of four-leaved clovers.  The fairy acted as a witness to the deal, making sure everything was in order.  Nerissa headed back to Seville and grabbed a paw full of grass to munch upon while his brother finished collecting the required clovers.

"Much easier," Seville answered with a smile.  "Especially for you," and he looked over at Nerissa preparing to take a nap on the sunny lawn while he continued searching for clovers sporting four leaves.

A short while later, the boys had all the four-leaved clovers they could possibly want and the fairy offered to escort them back through the vortex so that they could retrieve their teleportation device and return home.  They left Sean and Seamus behind, happily dancing jigs and counting gold coins.

"Never caught your name," Nissy said to the fairy.  "What did you say it was?"

"I didn't," replied the fairy with a smile.  "A fairy very rarely reveals her name," and with that, she disappeared, leaving behind a cloud of sparkling dust. 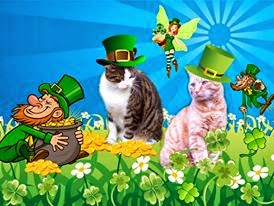 "MOUSES!" Nissy cried.  "She's gone and I was just about to ask her if she knew how to close that open time vortex in our kitchen.  Oh well, you'll have to figure out that one, Sivvers, but I'll help you clean up the mess with the glue when we get back home."

"Thanks, Nissy.  I'd appreciate that. Maybe you can help me get rid of this marker glued to my butt, too.  I just know the peep is gonna notice that and know I was workin' with super glue."

"That one is on you, Sivvers...   literally.  But I will help you clean up the rest of the mess.  Consider it my St. Patrick's Day gift to you."

The two cats climbed back into their teleportation device for the trip home and as they soared over the Emerald Isle they cried out, "HAPPY ST. PATRICK'S DAY!" to everyone in sight.

Posted by Seville at Nerissa's Life at 12:20