our conclusion and a new beginning Previously on Savannah's Paw Tracks... then a sudden vacuum of air and Savannah can hardly catch her breath…everything blurs…%$##ZAP*&%$##…Savannah feels someone snatch her up by her scruff and then…

"INCOMING!" Nissy hollered as he grabbed his pal, Savvy, by the scruff of her neck and hauled her up and into his frying pan teleportation device.

Nissy quickly veered westward and the two cats tumbled through the space-time continuum on their way to meet with Silver in New Zealand.  "Turbulence ahead.  Hang on to the handle of the fryin' pan, Savvy!  HANG ON FOR DEAR LIFE!  HANG ON FOR ALL NINE OF 'EM!"

"YOOWWWW!" yelled Savannah in response.  "What the mouses are you up to, Nissy?"  The turbulence eased and Savvy glared at her friend.  "You were supposed to meet me at my house and we were going to teleport to Silver's by tunnel."

"Couldn't be helped, Savvy.  Lost part of an egg beater somewhere over Ohio."  Nissy fiddled with some dials.  "Yup, just as I thought," and he tossed part of another eggbeater overboard.  "This will work.  I'll cut power somewhere over the Pacific and we'll coast the rest of the way to New Zealand." He pointed to the grocery bag nestled in a corner of the frying pan.  "Help yourself to some snacks."

Savannah tore open a bag of temptations, ignoring the fruit and other unsuitable foodstuffs lying before her.  Nissy had clearly relied upon one of his peeps to pack his snacks.

"Buckle up, Savvy," began Nissy.  "We're comin' in for a landing, now," and the two cats gently drifted onto a prettily manicured lawn somewhere in New Zealand.

"You're here!" cried Silver as he ran out to greet his friends.  "How wonderful!"  Silver looked warily at the frying pan with half an egg beater sticking out of it.  "Rough trip?"

"You don't know the half of it," stated Savvy as she jumped out and onto the grass.  "Nissy, if I've told you once, I've told you a thousand times.  I DON'T TRUST THAT EGG BEATER TELEPORTATION TECHNOLOGY OF YOURS."

"It got you here," Nissy shrugged, "and you appear to be all in one piece.  Attitude and everything."

"I do not have attitude," said Savvy, pursing her lips.  "I just don't trust those flying frying pans you and your brother build.  Especially when Seville has been known to use refurbished beaters."

"State of the art egg beater technology, this is," and Nissy slapped a paw against the teleportation device.  The three cats watched in silence as the rest of the remaining egg beater fell to the ground and landed with a loud thud.

"Anywho..." and Nissy quickly ushered Savvy and Silver toward the house and garage and away from his teleportation device.  "Silver!  You found Dash's workshop, you say.  So exciting.  Show us the way."

"Shouldn't we park your um...   frying pan thing somewhere out of sight?" asked Silver.  "You know, to keep it safe?"

Nissy looked back over his shoulder.  "Yeah...  I don't think it's goin' anywhere anytime soon. MOUSES!" 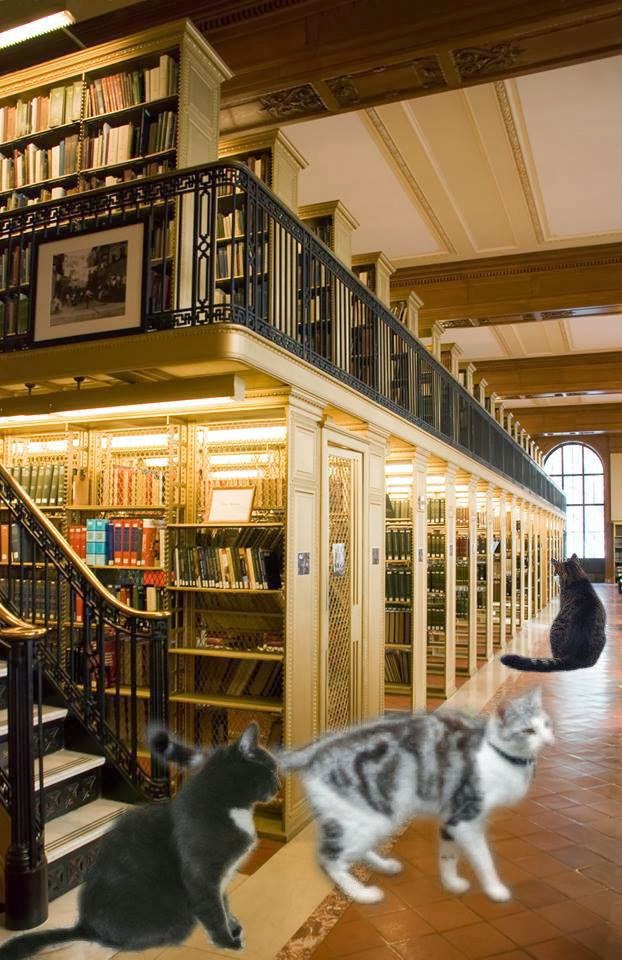 Silver led Savvy and Nissy through the garage and into the massive library.  The two newcomers peered around with astonishment.  What a collection of information Dash had amassed.  No wonder he had known so much about so many things.  They then entered the inner sanctum... Dash's workshop.  Silver pointed out the various projects Dash had been working on, including the half-built contraption that looked like some sort of vehicle.  "Do you think it's a new kind of teleportation device?" asked Silver.

Nissy walked around it, getting a good look from all angles. "No, not for teleportation.  Don't see any egg beaters."

"You and your brother are the only ones who teleport with egg beaters, Nissy!" exclaimed Savvy.  She gave the device the once over, herself, sliding underneath it on her back. Moments later, she appeared with a huge grin on her face. "There are tanks under there for an air supply.  I think Dash was building a submarine of some sort."

The three cats stared at one another in silence.  They then stared at the sub in awe and then back at each other.

Silver reached into a nearby cabinet drawer, pulling out the note Dash had left about a pink phone. "Do either of you know anything about this?"

"Dash was makin' notes about the phone we found on our last adventure, huh?"  Nissy held the pink cell phone out for the others to see.  "This is the phone in question.  Appears normal enough except there was a message about the Necata canipbis left on it and no one but us knew about that nip. Oh, and the chip inside it is made from something I've never seen before.  It contains an element heavier than anything known to cat.  Seville ran some tests but so far, he has found nothing conclusive."

"But how can it contain an element not yet known to cat?" asked Savvy.

"Nuclear reactions can produce new, heavy elements.  Is it stable?"  Nissy and Savvy dropped their jaws and stared at Silver.  "What?  I read things," explained Silver.  "I've never read anything about that, though.  Being here in Dash's workshop...   I feel a real connection to him and his work.  I must have once heard him muttering about heavy elements or something."

"Look at this," and Savvy pointed to what looked like a pocket inside the sub.  "What do you suppose this is?"

Silver gently pawed at the pocket.  "Nissy, let me see that phone," and he pushed the pink cell phone inside.  It fit, perfectly.

A gentle whirring sound began, quietly at first but with each passing moment, it slowly grew louder and louder.  A few lights within the vehicle began to flicker.  The submarine was coming to life.

Nissy noticed that Savvy had with her the stainless steel whisk they had found alongside the cell phone on their last adventure.  Snatching it away, he began looking for someplace in the sub where it might fit.  Finding a round hole in what appeared to be the sub's dashboard, he inserted the whisk.

As if by magic, the submarine rose several inches from the floor.  The whirring sound was quite loud by this time and lights were flashing off and on.

Savvy pushed past Nissy and grabbed hold of the whisk, yanking it out of the dash.  "Are you nuts? You can't just go sticking whisks into things and crossing your paws for the best.  You could have transported us all to a different time!" she cried before yanking the cell phone out of the pocket where Silver had inserted it.

The submarine dropped to the floor with a thump.  The lights flickered out.  The whirring noises ceased.

Silver turned towards the others, grinning from ear to ear.  "With your expertise, we can finish Dash's work.  I know we can.  Those are seats over there," and he pointed to the pink leather seats ready for installation, "and I'm sure everything else we need to complete the sub is somewhere in this workshop.  What do you think?"

Nissy and Savvy looked at one another, huge smiles forming on their faces, too.  "Of course we can!" they cried in unison.

"But where will we go?" queried Savvy.  "Why did Dash think we needed a submarine?"

Silver pulled out the little box he had found a few days earlier.  "I wasn't going to show you this just yet.  Not until I understood its significance.  Also, Dash left a note on it saying to keep it away from Nissy."  He opened the box and the aroma of Necata canipbis filled the room.

Nissy was over at the box in a flash.  He breathed in deeply before slamming it shut.  "Best you hold onto that for a bit, Silver.  That's the long-lost, thought-to-be-extinct species of Necata canipbis." Nissy sniffed the air, catching remnants of the nip's aroma here and there. 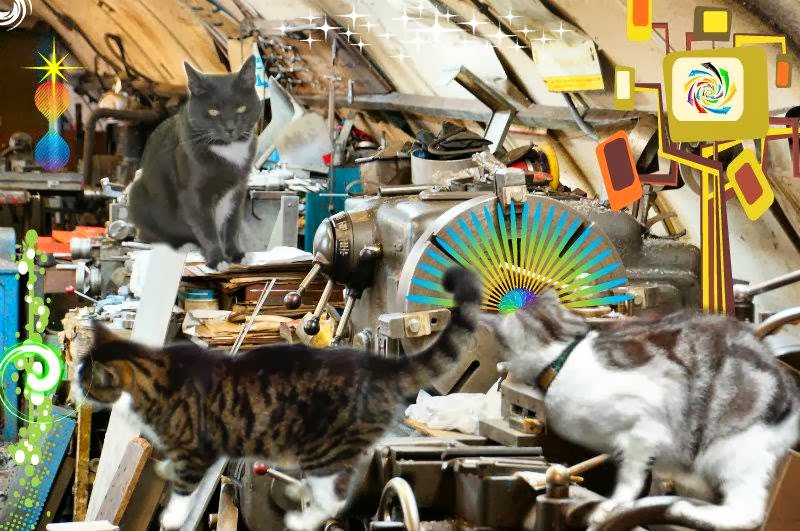 "I think it's safe to assume that Dash was hot on the trail of the nip.  We've just gotta figure out where that trail led. Must have led somewhere with water, I should think," glancing over at the sub. "But in the meantime...  we've got some building to do.  Savvy, where should we start?"

"We should start by installing these gorgeous pink leather seats," determined Savvy.  "They're the perfect colour for a cat like me.  Nissy... Silver...  help me get these into the sub," and the three cats began to work on finishing Dash's cat-sized submarine.

Posted by Seville at Nerissa's Life at 00:22