BREAKING NEWS...  A search is currently underway in rural Nova Scotia for  a missing peep.  RCMP have been joined by local search and rescue groups in a frantic effort to locate Seville the Cat's missing Peep #1 - aka Peepers - after she wandered into a nearby forested area looking for Seville.  She was last seen wearing blue shorts and a t-shirt.  Her hair was most likely in a ponytail because she's boring and that's how she always wears it.  If you should happen to see Peepers, you're advised to notify the authorities immediately.  Do not approach on your own as she may be inclined to behave like a stupid peep.

Okay, so nobody actually called in the police.

But Peepers did get lost in the woods.

Shush up, Peepers.  I'm busy tellin' everybody 'bout how stupid you were on Thursday.

And as luck would have it, I've got a whole lot of tellin' to do.

Okay everybody, here's the scoop:

So you all know how I've been cooped up here with the peeps for the past eighty-one million, six hundred and forty-eight thousand cat seconds due to this pandemic, right? 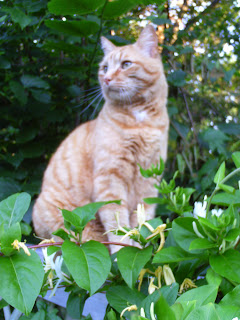 WELL I COULDN'T TAKE IT ANYMORE, my friends.

So on Thursday, I decided to check out the wooded area back behind our house.  I was mainly lookin' for someplace cool to hang out, away from the peeps.  It's been super hot here lately and the heat was gettin' to me.  Havin' the peeps on my paws practically all day, every day, was drivin' me nuts and for the sake of my own sanity, I really needed a break from those peeps.

Well I must have been back here for like...  I don't know, maybe a couple hours.  Two?  Three?  Possibly four.  I'd lost track of the time, to tell you the truth, as I was enjoyin' the cooler air in the shade of the trees, not to mention the lack of those darned, omnipresent peeps.

It was mid to late afternoon when I heard ol' Peepers callin' for me...

Truth be told, I had heard her numerous times earlier in the day, but had chosen to ignore her screechy caterwaulin' voice.

So like I was sayin', it was mid to late afternoon when I heard ol' Peepers callin' me, and it sounded like her voice was  gettin' closer and closer.  Sadly shakin' my head, I realised my peep-free afternoon was comin' to an end, and I slowly got up on my paws.  There was nothin' for it than to go let her know where I was.

The screechin'...  I mean, caterwaulin'...  I MEAN, voice was almost upon me and I decided to meow in response.  "I'M OVER HERE, YOU STUPID PEEP!" I sweetly mewed back.

Well Peepers must have heard my dulcet tones 'cause she immediately stepped off the narrow and lightly worn path made mainly by rocky raccoons and other local wildlife lookin' for a cheap meal in Peepers' veggie garden and stuff.  Apparently there are good bugs to be found in and and around Peepers' potted pepper plants, you see.

If you're a raccoon or a skunk, that is.

The next thing I knew, the peep was scoopin' me up and smotherin' me in kisses.

And a little while later...

Hmmm...  You know what?  I'm gonna tell you what happened next, next week.