the Santa Sack, part I

This particular adventure actually happened last year, in December of 2018.  I started writin' about it then, but never got the chance to publish it, and in January, my brother Anderson succumbed to cancer, and then my sister, Mason, soon after that.  But a couple weeks ago, I read what I had written last year, when Mason and Andy were still with us, and my heart filled with joy.  It brought back all the memories of the fun we had together, and how much I loved them both.  So I thought to myself;  maybe my pals might enjoy reading 'bout our last adventure together, too.  Enjoy!  PURRS. 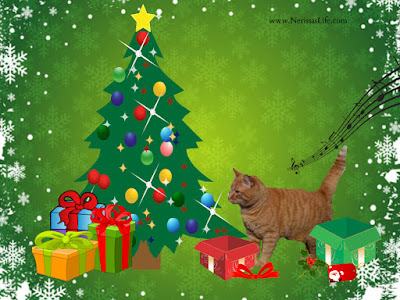 "Jingle bells, Santa smells, jingle all the way..." Seville sang to himself while wrapping up presents.

"That's not very nice, you know," Mason said as she entered the room.  "Santa doesn't smell."

"And THAT'S not very nice, either."

"Meh...  Perhaps not, but it most definitely IS factual."

"It is not!" cried Mason, her front paws now on her hips.

"Obviously you've never used the litter box after yourself.  MOUSES!"

Mason growled.  "Seville, I came to tell you there's someone at the door looking for you.  A delivery guy says he needs your pawnature."

Seville returned moments later, dragging a large box behind him.  He used a claw to tear through the tape holding the box together, then pushed up the lid.  A wide grin grew across his face as he stared at the plush red fabric, within.

Andy and Rushton poked their heads into the living room.  "Did someone send you a prezzie, Sivvers?" Andy asked.

"Nope.  I ordered this myself," and he held up the red jacket to admire it.  "What a beaut!  I'm gonna be the best dressed cat in town this Christmas, for sure."

"You bought yourself a Santa Suit?" Rushy asked in awe.

"From whom?" asked Mason, a tone of suspicion evident in her voice.

Seville rolled his eyes.  "Some guy on e-Bay, of course.  Where else would I get something like this?"

"You have to be careful when buying things on-line, Seville," Mason said, her lips pursed together in  a know-it-all, sisterly smirk.  "There are all sorts of scammers out there.  That outfit will likely fall apart the first time you wear it.  It was probably made in China," she muttered.

As Seville was donning the jacket, Rushy reached into the box.  "There's more stuff in here, Seville.  More than just the suit."

"The jacket is supposed to come with a Santa hat and sack," Seville answered.  "I think that there is the sack."

Seville's ears perked up.  "A gift with purchase, perhaps?  I didn't even know about that.  What fun!  See what's inside, would ya?  I'm still tryin' to...  ARGH!" he growled with frustration.  "I'm still tryin' to get my other front paw into the sleeve of this here jacket."

Mason shook her head and turned to leave the room, but the sight of Rushton's tail protruding from the Santa sack made her pause.  Something didn't look right.  "Rushy, that bag isn't big enough for you to fit inside it."

"Is too..." Rushton called back, his voice sounding eerily distant.

Andy approached and lifted up the edge of the Santa sack, causing Rushy's tail to disappear inside.  He poked his head in it, too, and then back out.  "Uh, Sivvers...  Mason?  Rushton isn't in there, but I know I saw his tail disappear into that sack."

"Oh for crying out loud," Mason snapped, grabbing the edge of the sack from Andy.  "He is too in there, he..."  She looked over at Seville.  "Seville, Andy is right." 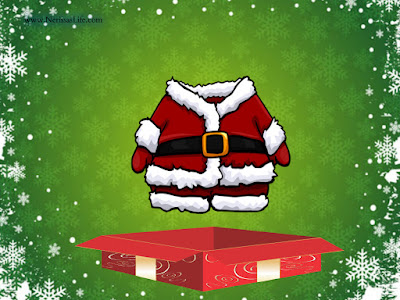 Seville nearly fell backwards from shock.  (You know, on account of Andy being right.)  With the jacket now on, he padded over to the Santa sack and lifted it up.  It was as light as a feather.  "He's not in there, Sis.  I couldn't pick up the sack if there was a long-haired freak of a brother inside.  Rushy's not as heavy as Andy," and he looked skeptically at his brother, "but still..."

"But I saw him go inside it!" Andy exclaimed.

Seville rolled his eyes.  "For mousin' out loud.  I'll prove it to you," and with that, Seville crawled inside the sack himself.

"WHERE DID HE GO?" Mason and Andy cried in unison.  The sack was lying flat on the floor.  There were no bulges.  No bumps.  No trace of Seville, even though both cats saw their brother crawl inside it.

Mason lifted up the bag and peered in, but it still appeared to be empty.  She looked back out at Andy.  "He isn't in there.  Nor is Rushy."

"Let ME see!" Andy cried, but in his haste to take a peek, Andy tripped over his front paws and bumped into Mason, and before either cat knew it, they were both tumbling head over paws into the depths of a large, dark cavern.  Finally coming to a stop, they looked about but could see nothing but darkness all around them.

"FINALLY," exclaimed Seville.  "I thought you two would never get here."  He padded over to his fur-sibs, carrying a lantern.

"WHO did you say sold you that Santa outfit, Seville?" Mason asked, her voice very wary, now.

"I told you, some dude on-line.  He did say the outfit was special..."  Seville's voice trailed off.

"Stolen property is more like it," scowled Mason.  "Do you think this could actually be Santa's sack?  Santa must use magic like this to fit in it all the nip mice and feather wand toys he delivers every Christmas to all the kitties around the world."

"Not to mention treats," added Andy.  "Santa brings lots and lots of treats."

Seville sat back on his haunches to think.

"Look what I found!" cried out Rushton, suddenly appearing at Seville's side.  "Mason mentioned nip mice and I thought to myself, boy would I ever like a nip mouse right about now, and the next thing I knew, there was a nip mouse right there by my paws!"

"And WHAT?" demanded Mason.  "How are you going to call Santa?  We're stuck inside this darned thing with no way out."

Andy tugged on Seville's tail.  "You could use that telephone over there," he suggested.  "To call Santa, I mean," and he pointed to a telephone booth standing a few feet away.

"Sounds like a plan," Seville agreed, never questioning the sudden appearance of a telephone booth inside the Santa sack.  He looked about, "Anyone have a quarter?"

"There's one over here."  Rushton pointed to a quarter lying on the ground, sparkling as the light from Seville's lantern bounced off it.

Seville headed to the phone booth to make the call to the North Pole, and Mason turned to Rushton.  "Where did Seville get that lantern?" she hissed in a low whisper.

"He found it when he arrived here, wherever this place is.  When I first got here, it was pitch black, but then Seville appeared.  Now I didn't actually see him appear, because it was so dark, but I could hear him, and I heard him say something about his needing some light, and the next thing we knew, there was a lantern just sitting there, all ready to use." 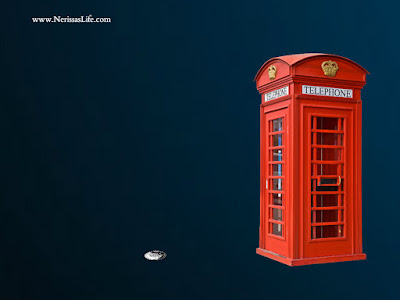 "ANYONE KNOW THE AREA CODE FOR THE NORTH POLE?" Seville hollered from the phone booth.

Everyone looked at him.

"What?  I read," he shrugged, "and sometimes I read the phone book."

Seville leaned his head out of the phone booth.  "You three had better take my lantern and start lookin' for some more quarters.  This call might take a while.  Some stupid elf went and put me on hold.  MOUSES!"

Be sure to tune in on Christmas Day for the conclusion to my VERY SPECIAL Christmas adventure.  PURRS

Posted by Seville at Nerissa's Life at 10:00