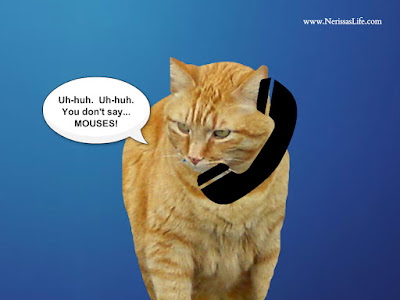 Previously on Nerissa's Life:  Seville leaned his head out of the phone booth.  "You three had better take my lantern and start lookin' for some more quarters.  This call might take a while.  Some stupid elf went and put me on hold.  MOUSES!"

Your call is important to us.  Please stay on the line to maintain your calling sequence priority.

"Oh for mousin' out loud," Seville groaned.  "This is ridiculous.  I wonder if...  Hmmm..." and he began to punch random numbers on the telephone keypad.

"Then how 'bout this?" and Seville dialed a seven.

"Can you hold on for a minute?" a high-pitched voice asked.  "Do you mind if I put you on hold?"

"NO!" Seville hollered, but the elf on the other end of the line had already gone.  He dialed seven again, and when the elf picked up the phone this time, Seville yelled, "DON'T PUT ME ON HOLD!"

Seville could hear a lot of noise in the background.  Basic background chatter.  Elves muttering about something being wrong.  Bells frantically ringing.  Elves scolding one another.  More bells ringing, more frantically than before.  Rudolf asking someone - probably an elf - if they could help him practise his pre-flight sequence.  EVEN MORE ringing bells, ringing EVEN MORE frantically than ever.  He could picture utter chaos up at the North Pole: parcels backing up on conveyor belts and bells indicating impending parcel backup disasters.  And then above all the noise and commotion; above all the accusatory elf voices and ringing bells; above all the chaos currently taking place at the North Pole, Seville heard...

Seville was sure he felt hot steam pouring out of his ears, and he punched in a zero followed by the star symbol, then the number sign, and then three nines.

"How did you get this number?" a deep voice half growled, half chuckled, on the other end of the line.

"YES!" Seville squealed, high-fiving the air.  "Oh thank goodness, I thought I'd never get through to you.  Your elves kept putting me on hold."

"Well they're mighty busy down in the workshop, right now.  To tell you a secret, we've hit a bit of a holiday snafu.  Nothing we can't clear up by Christmas Eve though, Seville.  Don't you worry, you'll definitely get those nip mice you asked for this year."

"Ummm...  Santa?  The problems you're havin' up at the North Pole..."  He pawed at the floor of the telephone booth.  "Those problems...  Do they have anythin' to do with your magical Santa sack bein' missin'?"

"It IS missin', isn't it," Seville continued.  He wasn't asking a question; just wanting confirmation.

"How do you know about my missing Santa sack, Seville?"

"Well uh...  Um...." and Seville proceeded to tell Santa all about the Santa suit he had ordered from some dude on e-Bay, and how it came with a sack - as expected - but that the sack was magic and now he and his three fur-sibs were trapped inside.

Seville could hear a clock ticking in the background.  Likely the clock Santa kept on his desk.  He remembered it from the picture he had taken of Santa in his office one year while visiting.

After what felt like an eternity, Santa spoke up.  "You've got yourself into a right pickle there, Seville, haven't you."  Again, not a question.  Santa was stating an obvious fact.

Santa chuckled, "Luckily for you, little one, I do.  Now that I know where my sack is, resolving the issues..."

Seville heard a loud crash on the other end of the line.  The mountain of gifts that had been piling up at the end of the conveyor belt instead of being put into Santa's magical sack had collapsed under their own weight.  He knew the noise must have been extremely loud to be heard all the way into Santa's office. 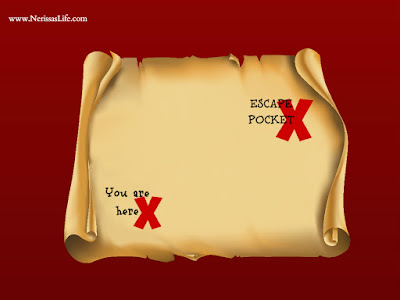 "Er-hm...  Don't worry about that, Seville.  Nothing breakable," he chuckled, nervously.  "I hope.  But as I told you, now that I know where my sack is, getting it back here is really very simple."  Santa then explained exactly what he needed Seville and his fur-sibs to do."

Seville nodded his head up and down.  "Yup, that's what Santa said."

"It sounds too good to be true," Mason scowled, "like your on-line ordering habits do."

Seville stuck his tongue out at his sister, then, remembering Christmas was almost upon them and that kitties who stuck their tongues out at their fur-sibs might land themselves on the Naughty List, he smiled, which only made him look like a grinning Cheshire Cat, or a kitty who might have swallowed a canary, or...  "Sorry, Mason," he muttered.

The four cats then held paws, closed their eyes, and as Santa had instructed Seville, they all thought as hard as they could about needing a map to the secret escape hatch.  Seville was the first to open his eyes.  There on the floor, in the middle of the circle the cats had formed, was a map, and on that map a large letter 'X' marked the spot.  "We've got it!" he squealed with delight, snatching it up with a paw.

"I'll take that," said Mason, grabbing the map from her brother.  "It looks like we need to head that way."

How Mason was able to navigate the map was beyond Seville.  To him, it had looked like nothing more than...  Than a blank piece of paper with two locations, but with nothing to show which way was up or down, or left or right, or...

"Are you boys coming or not?" Mason asked impatiently.

"Yes, Mason," they murmured in unison.

Before long, the four cats found what appeared to be a large trap door.  Mason grabbed hold of the handle and tried to pull.  "I could use a little help here, boys," she said, so Seville got hold of Mason's tail, and Rushy held onto his, with Andy holding onto Rushton's.  "One, two, three, PULL!" Mason cried, and this time, the trap door opened with ease.  The cats all looked down into the hole below, but saw nothing but darkness.

"I thought you said this was the way out," Rushy said to Seville.  "It looks like here, except it's...  There."  Mason and Andy nodded in agreement.

"Santa said this was the way out," Seville told his fur-sibs, "and if you can't trust Santa, who can you trust?  MOUSES!"  He took Rushton's paw in one of his, and Mason's in the other, and instructed Andy to hold paws with Rushy, and together, the four cats jumped into the abyss.

"Watch where you're putting that tail."

"Was that your nose I whacked, Mason?"

Moments later, the four cats tumbled out onto their living room floor with the Santa sack lying flat on the ground beside them.  Rudolf the Red-Nosed Reindeer was waiting for them, just as Santa had told Seville he would be.  "Everyone out?" he asked the cats.

Seville looked about and seeing Mason, Rushy, and Andy all grooming themselves, attempting to make it look like they had INTENDED to come clumsily tumbling out of the sack as they had, all along, he nodded.  "All here."

"I'll be on my way then," said Rudolf, grabbing onto the sack.  "Need to get this back to the North Pole, ASAP.  Let me tell you, Little Jackson is going to be on the Naughty List for the next fifty years after selling you this sack."

Rudolf turned to leave but Seville had one more question.  "Rudolf, how come the sack even has a built-in escape hatch?"  Seville thought he saw a blush creep across Rudolf's face, although it IS hard to tell when a reindeer with a bright red nose is blushing.

"Way back when, when I was a very young reindeer, I managed to get myself stuck in that sack," Rudolf explained, pawing at the floor with a hoof.  "It was humiliating.  After that, Santa asked Mrs Claus to sew in a pocket on the sack to be used as an escape route if anyone else should get trapped inside." 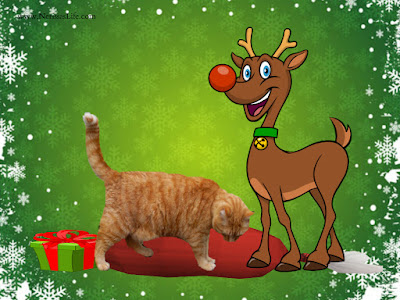 Seville could tell Rudolf was embarrassed about having been caught in the Santa sack, so he slapped the reindeer on the back in a friendly manner and smiled.  "Well I, for one, am pretty darned happy that happened to you back then.  Had it not, Mrs Claus would never have sewn in that pocket and my fur-sibs and I would still be trapped in that there sack.  That escape hatch sure did save our furry tails today."

Rudolf smiled back.  "Merry Christmas, you four," he said, before heading out the front door.  "See you Christmas Eve!" and with that, he took flight.

"Merry Christmas!" Seville, Mason, Rushy, and Andy cried, waving to Rudolf as he flew higher and higher into the air, finally disappearing out of sight.

Posted by Seville at Nerissa's Life at 15:33