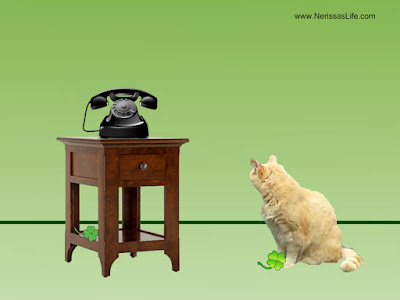 "Whatcha doin' there, Mason?" Seville whispered in his sister's ear.  "Spyin' on the peeps?"

"SHHH!" Mason slumped her shoulders, disappointedly.  "Darn it, Seville.  You made me miss what Peep #1 said right before she hung up the phone."

"Sorry 'bout that, Sis.  Was it an important call?"

"I'll say.  The peep has some sort of infestation," and Mason spat the last word out with disgust.

Shaking her head, Mason replied, "I don't think so.  She was talking to some kind of plant doctor, whatever that is.  Some of the plants in the sunroom are infested with...  Uh...  I think she said it was greenflies.  No, she said, aphids."

Mason shrugged.  "I suppose we can try.  Let's go check it out."

Seville opened the sunroom door, only to back away quickly before slamming it shut again.  "MOUSES!" he cried.  "It's not just one or two plants with aphids.  THE WHOLE SUNROOM is FILLED with green things flying around everywhere.  It's the infestation of all infestations.  An infestation of mammoth proportions.  IT'S HUGE!  It's...  It's....  IT'S...  IT'S A NIGHTMARE IN THERE.  No wonder the peep was callin' a plant doctor for help.  I think she should be callin' in the army, myself.  We're gonna need exterminators.  Or ghost busters.  Or BOTH!  MOUSES!"

"It's THAT bad?" Mason queried, as a green object hit the glass pane of the sunroom door, causing her to jump backwards with fright.

"Yup.  That bad and more.  How the mouses did aphids multiply like that?"

"And why are they so big?"  Mason stared in disbelief as another green object hit the door.  "They must be the size of small birds!"

"At least.  Never seen anythin' like it," Seville muttered.  "MOUSES!"

"Mouses is right.  They could be the size of mice.  They're definitely bigger than chickadees."  Mason peered through the sunroom door, staring at the objects flitting about the room.  "Do you think they're some kind of aphid mutation?" she finally asked.

Seville sat back on his haunches.  "If that's the case, Peep #1 isn't gonna be able to deal with 'em all by herself, and I'm not sure a mere plant doctor will be able to help her, either.  Generally speakin', peeps aren't used to dealin' with mutations and stuff.  Hmmm...  I wonder if they could be radioactive," he pondered.

"Well Peep #1 is DEFINITELY not used to dealing with that."

Seville nodded, "You got that right, Sis.  This is most definitely a job for us cats.  Now how exactly does one deal with a radioactive infestation of mutated aphids?  You think we should...?"

"Seville..." Mason interrupted, as ANOTHER green object hit the glass door.  She watched it as it flew away, and across the room.  "I don't think those things in there are aphids.  I don't think they're insects, at all.  They look more like..."

"Like FAIRIES," Seville said with dread.  "MOUSES!"  He turned to his sister and grabbed her by the shoulders.  "Do you know what this means, Mason?  It means, the peep has a FAIRY infestation in the sunroom!  How the HECK does that even happen?" 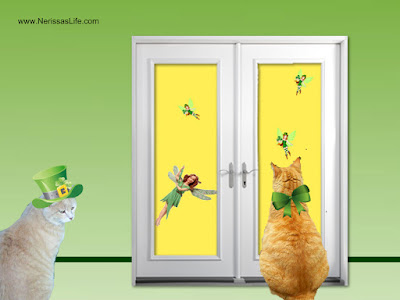 Mason shook herself free from Seville's grasp.  Gritting her teeth, she asked, "Are you sure you didn't have anything to do with this, Seville?"

"What did you do?" asked his sister.

"What did you do THIS time, I should be asking," persisted Mason.

"Well I might have...  Nah, I REALLY don't think that could have uh...  Ummm...  Okay, so this is what happened," and Seville clapped his front paws together.   "Remember that fairy garden the peep was settin' up in the sunroom?"

"Well in that fairy garden,  there was this little door.  It was a pretty small door.  It was fairy sized, you know?  And it was stuck."

"Oh, it wasn't stuck on anythin', Sis.  It was stuck shut.  And as a cat, I've never met a door I didn't want to open.  You know, to see what's on the other side, and that sort of thing.  We cats always wanna be on the other side of any closed door, right?"

"Well...  Well I was absolutely sure I could get that little fairy door open.  It had a keyhole and everythin'.  All I needed, was the key."

"And did it have a key?" Mason asked.

"No.  Unfortunately, there was no key.  But I wasn't gonna let the lack of a key get the best of me!  So I uh...  Well... Well I kinda jimmied the lock.  And do you know what?  That little fairy door opened right up!"

"To where?" Mason looked confused.  "I mean, what was on the other side?"

"Now that was where things got kinda weird," and Seville made himself more comfortable before continuing his explanation.  "There was like this empty hole on the other side of the door.  It was a really long, very dark, tunnel kind of thing, leading to...  To I don't know where.  It was just empty, black space."

"That IS weird," agreed Mason.  "So what did you do then?  Close the door shut again?"

"Uh....  That would be a negative, Sis.  I think that's about the time I heard Peep #1 openin' a bag of treats, so - OF COURSE - I ran into the kitchen to get some.  And to tell you the truth, I don't really know what happened to the little fairy door after that.  I think I just left it there."

Mason scowled at her brother.  "Mouses Seville, you've gone and opened some sort of wormhole, or transdimensional vortex, or..  Or...  Or I don't know what, leading from I don't know where, right into our sunroom.  This is not a good thing, Sivvers."

Just then, another fairy hit the sunroom door with a loud thud.

"And the fairies appear to a wee bit upset, too," Mason said, adding an Irish lilt to her voice.

"You'd really think they'd learn to stop hittin' the door like that," murmured Seville as another fairy slammed into it.  "That's gotta hurt.  MOUSES!"

"Seville," began Mason, "can you see the fairy garden from this side of the sunroom door?  Can you see if the fairy door is still open?

Seville peered through the glass.  "Yup, it's over there in the far corner.  The door appears to be shut, but I really don't remember closin' it."

"HEY!  CAT!" yelled a fairy, who was fluttering mid-air in the sunroom.  "You're the cat I saw yesterday, when I came to visit the garden on this side of the door." 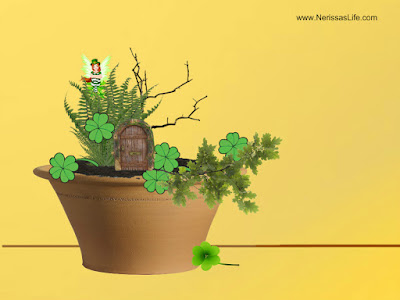 "Yes.  Moments after I flew into the garden, I looked over and saw you, high-tailing it out of this...  This prison, where my sisters and I have been trapped."

Seville thought for a moment.  "So you're sayin', right after I opened that there little door," and he pointed over to the fairy garden, "you flew through it, and into our sunroom?  And all those other fairies?  Did they just follow you through the same door?"

"Yes," answered the fairy.  "We like to travel in packs.  Do you have a problem with that?"

Ignoring the fairy's question, Mason asked, "And then you were all trapped in our sunroom?"

"If by sunroom, you mean this PRISON, then yes," the fairy answered.

"Well that's dumb," said Seville.  "If you thought you were bein' imprisoned in our sunroom, why didn't you just turn around, and fly back through the door again?"

The fairy's expression grew impatient.  "Because, STUPID, by the time we realised we had been imprisoned, the door has closed shut again.  There was another cat in here.  Orange like you, but with longer fur.  One of my sisters startled him, and as turned to flee, his tail hit the garden door, swinging it shut."

Mason and Seville looked at one another and in unison, stated, "Andy."

"Well?" said the fairy.  "Are you going to set us free?  Or are you planning on holding us here indefinitely.  Or are you holding us hostage for ransom of some kind...  Are you demanding a ransom of leprechaun gold before you'll return us to Ireland?"

"Oh for mousin' out loud.  Hold onto your horses there," Seville told the fairy, tersely.  "No one's holdin' you hostage or damandin' ransom or anythin' like that.  Although...  About how much gold would we be talkin' about, exactly?"

Mason gave Seville a hard smacky-paw to the back of his head.

"Ouch!"  Seville scowled at his sister.   "Fine.  I guess it would be best if we were to just let them go."

"Don't think you're letting them free in our house," Mason warned.

Seville sighed.  "Don't be silly, Sis.  "I jimmied that lock open before, I can jimmy it open again.  Once the door is open, the fairies will be free to fly back through the door, and return to Ireland."

"Sounds like a reasonable plan," agreed Mason.  "Although you are going to have to enter the fairy infested sunroom to do it."

"Don't I know it.  Once I enter the sunroom, Sis, be sure to slam the door shut.  We don't want any of those fairies gettin' loose out here."  Seville took a deep breath, swung open the door, and dashed inside the sunroom, calling out behind him, "Wish me luck!"

"Good luck," Mason whispered under her breath.  She closed the door behind her brother, and watched Seville as he made his way across the room, swatting flying fairies out of his way, as if they were a swarm of green and white mosquitoes.

Slowly but surely, Seville fiddled with the fairy door's lock until he managed to get it open.  "Whew," he sighed with relief.  "Okay you fairies!" he called out.  "You all need to line up, single file, now.  One at a time, fly through the door and be on your way home," he instructed.  " AND NO RACIN'!  I don't need anyone with broken wings, on my paws," he muttered.

Once the last fairy had disappeared through the door, Seville shut it tightly.  Not wanting to take any chances of another fairy infestation, he broke off the sheath of his longest claw, and jammed it into the lock.  "There, that should do it.  No way, no how, is this door gettin' opened again.  One fairy infestation is enough for this cat's nine lifetimes, for sure.  MOUSES!"

Returning to the sunroom door, Seville pounded on it.  "You can let me out of here now, Mason!" he cried. 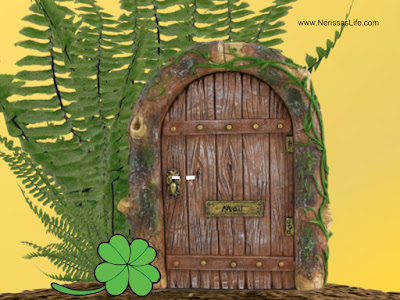 "Are you sure those fairies are all gone?"

Seville looked about.  "Yup, every single one of 'em.  They're probably back in Ireland by now."

Mason opened the door for Seville.  "That's good.  They'll be back in time for St. Patrick's Day, too.  All's well that ends well, right?" and she patted her brother on his back.  "You did good work today, Seville"

Posted by Seville at Nerissa's Life at 10:00