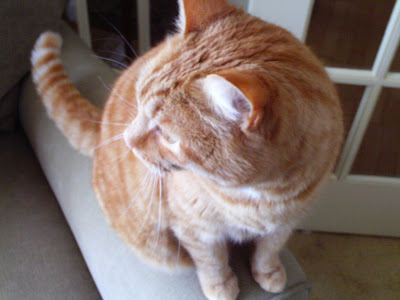 You can say that again, Andy.

"I'm always on the wrong side of the door."

Oh for mousin' out loud.  When I said, you can say that again, I didn't mean for you to take me quite so literally, and actually say it again.

And quit sighing like that.  It's very unbecoming for a cat.

"But you sigh all the time, Sivvers."

That's different.  That's me.  It's totally different, for sure.

You know, there is some truth to what you're sayin', Andy.  We cats are always on the wrong side of the door, 'cause whatever side we're on, it always seems to be the opposite side of where we wanna be.  I think it's a law of nature or somethin'.  Or maybe it's physics.  Hmmm..  Nah, sounds more like geography, to me.

And now that I think about it, it's a lot like a time travellin' paradox, where you can't change the past without changin' the future, thereby no longer allowin' you to change the past, on account of the newly changed future no longer givin' you the ability to travel into the past to change it.

Well it's kinda like that, anyway.  'Cept without the time travel stuff, of course.

I believe it may be called, The Wrong Side of the Door Paradox.

Actually, you might be right about that, 'cause you know, I do make up a lot of stuff.

I mean, I do invent a lot of things. I discover a lot of stuff, too.

What?  What do you want now?

Anderson, if you wanna stare at me, you can stare at me with wonderment or adoration or anythin' similar to those things, but do not - and I repeat, DO NOT - stare at me like that.

It's very unbecoming, you see.

At least it is to me.

AND STOP SIGHING!  I thought I told you to stop sighin', before.

By the way, Andy, why is it that you're sighin', anyway?  You still upset 'bout bein' on the wrong side of the door?  'Cause there's really no point in bein' upset about the Wrong Side of the Door Paradox.  Nothin' we cats can do 'bout the existence of a paradox.  Nothin' at all!

Andy, how come you wanna be on the other side of the door so badly?

Then ask the peep to open the door for you and let you outside.

"But there's snow outside, Sivvers."

"Seville...  Do you think it's possible there could be three sides to a door?"

Yes, Andy.  Yes, I do.  I do believe there could be three sides to that particular door.

Well I'm glad we got that sorted.

Oh, I don't know, Andy.  Sometimes a cat has just gotta smacky paw his brother, you see.  I think it's a law of nature or somethin'.  Or maybe it's physics.  Hmmm...  Nah, sounds more like sociology, to me.

Posted by Seville at Nerissa's Life at 16:36

Email ThisBlogThis!Share to TwitterShare to FacebookShare to Pinterest
Labels: cats, humor, humour, smacky paws, snow, winter, woe is me, wrong side of the door, you can say that again