read me a story 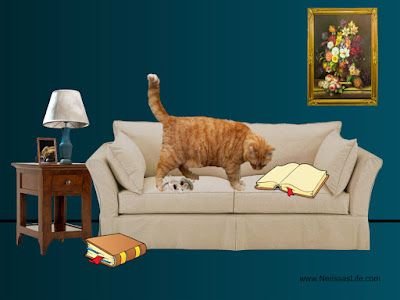 "Read me a story, Peepers.  Please?  I'm havin' a hard time fallin' asleep, but I just KNOW I could fall asleep, lickety-split, if you were to read me a good story.  Doesn't matter which one.  Maybe a fairy tale or somethin'?  PLEASE?"

Seville curled up on the couch, and Peep #1 brought out The Big Book of Fairy Tales, a book containing many of Seville's favourite stories.  "Once upon a time," Peep #1 began.

Seville closed his eyes, and listened.

Once upon a time, a very useless nip grower, and her handsome marmalade cat, along with his four fur-sibs, lived in a tiny cottage at the edge of a terribly dark and scary forest...

"Mason!  MASON!  You'll NEVER guess what I just read.  It was on the front PAGE of the PAPER, and everythin'.  Apparently, the Weasel Syndicate has set up shop in the woods behind our house.  Right out there.  Behind OUR HOUSE.  Can you believe it?  MOUSES!"

Mason rolled her eyes.  "Oh for goodness sake, Seville.  You can't believe everything you read.  Haven't you ever heard of fake news?"

Seville scowled at his sister.  "It's not fake news, Sis.  It's real news.  Printed right there on the cover of somethin' called a tabloid, which is a paper tablet, I do believe.  MOUSES!"

Mason rolled her eyes again.  "Like I said, it's FAKE NEWS, Seville.  You really are the most gullible cat ever, aren't you?"

"I am not.  I'll prove it to you, too.  Prove that it's real, that is," and Seville stomped a paw.  "Tonight, when the peep is fast asleep, I'm gonna sneak out of the house and find those weasels, if it's the last thing I do."

"And it likely will be the last thing you do, if you go wandering around in the woods late at night.  You know perfectly well, Peep #1 doesn't allow us cats out after dark."

"Yeah, well what the peep doesn't know won't hurt her, will it?"

"The question is, will it hurt YOU."  Mason eyed her brother.  "I'll make you a deal.  We'll go in search of those supposed weasels, together, but if we don't - AND WE WON'T - find them within an hour, we'll come home straight away."

Seville considered the offer for a moment before breaking into a large smile.  "DEAL!" and he high-pawed his sister.  "We'll find those weasels before you know it, Sis, 'cause I KNOW they're out there.  Fake news...  Ha!  What WILL you come up with next?  MOUSES!"

Late that night, as the clock struck midnight, Mason and Seville quietly crept through the house, readying themselves for their journey.  Seville opened the back door and together, the two cats stepped out into the darkness. 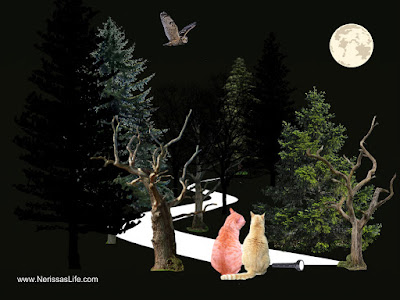 They approached the edge of the terribly dark and scary forest, and Mason said nervously, "I don't think this is such a good idea after all, Seville."

Seville looked up at the night sky.  "It's a full moon tonight," he remarked.  "There's lots of moonlight, Mason.  It's practically like the middle of the day!  We're gonna be fine."

Entering the forest, Mason and Seville followed a well-trodden path.  Although they had travelled along this particular path many times, even Seville had to admit it looked a lot different at night.  There were shadows where shadows had never before been, and unfamiliar noises such as the hooting of owls could be heard.  He couldn't help but shudder.

After walking for ten minutes or so, the cats came to a fork in the path.  Seville sat back on his haunches and thought.  "Now which way do you suppose we should go?" he asked aloud.

"I think," Mason began, "we should turn right around, and head back home.  Sivvers, Weasel Syndicate or not, we're going to get ourselves lost out here.  If we're not lost already, that is."

"Got that covered!" and Seville pumped the air with a paw.  "I left us a trail to follow home."

"Mason, while you've been unnecessarily fretting over our gettin' lost, I, Seville the Cat, have been doin' somethin' to prevent it.  I've been leavin' a trail for us to follow.  One that will take us right back home, when the time comes.  See this bag of treats?" and he held up a now half-empty bag of his favourite temptations.  "You probably thought I was munchin' on these while we've been walkin', but you'd be wrong about that.  Why, I haven't munched on a single one!  No sirree.  Instead, I've been droppin' a treat or two, every few feet, as we've been walkin' along."

Mason's jaw dropped and she looked truly amazed.  For even though Seville's incredible intelligence and foresight were obvious to practically EVERYONE ON THE PLANET, until now, this fact had escaped her.  "Well I'll be..."

Seville smiled, smugly.  "Check it out, Sis.  Come on, I'll show you," and he led Mason back along the path a few paces, pointing out dropped treats here and there, along the way.  "See?  This trail of treats will lead us straight home when the time comes."

Together they turned a corner, but stopped suddenly when they ran smack dab into one of their two long-haired marmie freak brothers.

"Anderson!" Seville cried.  "What the mouses are you doin' out here?"

"Ummph..." Andy mumbled, his mouth full.  Swallowing hard, he began again.  "What are YOU doing out here?" he asked.  "Peep #1 says we cats aren't allowed outside after dark, and we're especially not supposed to be wandering about in this terribly dark and scary forest." 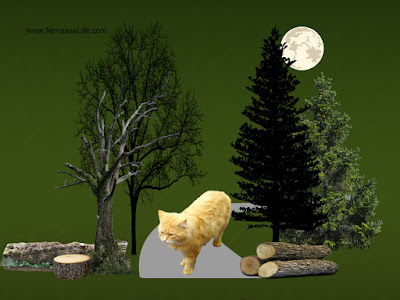 "Since when did you start doin' what the peep says?" Seville asked.

Seville peered at his brother.  "And by the way, what were you eatin', before?" he asked.  "Peep #1 also says, we shouldn't just put any ol' thing we find, into our mouths, and..."

Be sure to return Wednesday to find out what happens next.