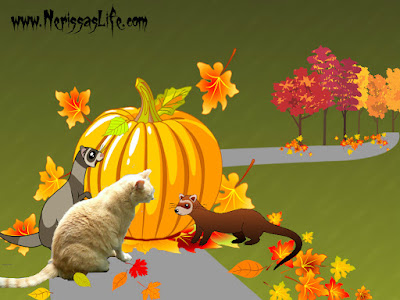 "Awww...  MOUSES!  Who is that blockin' my driveway?  And I was just gonna send the peep out on a treat run."

Looking out his office window, Seville leaned forward to get a better look at the large, orange object in the driveway.  "Hmmm...  A better question might be, WHAT is that blockin' the driveway?  MOUSES!"

"HEY ANDY!  YOU ORDER AN ORANGE CAR ON E-BAY OR SOMETHIN'?"

"Well I'm not gonna just sit here and do nothin'.  I'm gonna head on out there, and tell whomever is drivin' that  thing, to get their moused-up, orange vehicle outta my way."  Slamming the door on his way out, Seville stomped down the driveway.  "Hope it's not some kinda clown car," he murmured to himself.  "Those things freak me out.  MOUSES!"

Considering the possibility of a carload of clowns sitting in his driveway, Seville approached the orange object with trepidation.  "They had best not jump out at me," he muttered.  "Nothin' worse than a bunch of clowns, jumpin' out at you, and..."

"WHAT THE MOUSES?"  Seville stopped in his tracks at the sight before his eyes.  There, in his very own driveway, was his sister, Mason, chatting away with a couple of weasels, undoubtedly sent by the Weasel Syndicate.  "Mason, why, pray tell, are you cavortin' with weasels?  MOUSES!"

Mason rolled her eyes.  "We're not cavorting, Seville.  We're just finishing up a little business," and with that, she pawed a piece of plastic over to one of the vermin.

"That had better not be the peep's credit card, Mason.  Peep #1 said we were to stop usin' it when dealing with unsavoury characters."  One of the weasels raised an eyebrow.  "Yeah, you heard me right," Seville sneered.  "YOU are an unsavoury character, for sure."

"OH-KAY..." and Mason turned back to the weasels.  Smiling, she held out a paw.  "Looks like we're all done here.  As always, it was a pleasure doing business with you."

After vigorously shaking Mason's outreached paw, the lead weasel turned toward the other, and together, they scurried down the driveway, chuckling away to themselves.

"That's because it is a pumpkin, Seville.  I am now the proud owner of one giant-sized, orange pumpkin.  Isn't it beautiful?"

"It's a pumpkin.  A pumpkin, Mason.  A PUMPKIN!  WHAT THE MOUSES ARE YOU DOIN', BUYING A GIANT-SIZED PUMPKIN?  When this thing starts to rot, it's gonna attract rats and mice, for sure." 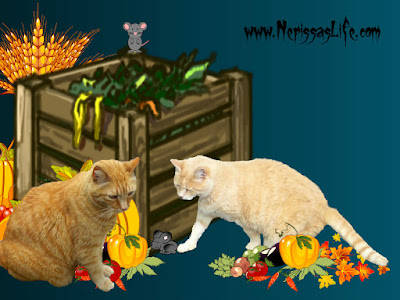 "Mice!" and Mason snapped her claws.  "I need mice.  Now, where's the best place to look for a couple of mice?  Seville, you have some mouse friends.  Where do they usually hang out?"

"Who says you're weird, Seville?"

"Well you, for starters.  Mason, I'll repeat my question.  What the mouses are you doin', buying a giant-sized pumpkin?  And why the mouses are you searchin' through the compost pile now?"  He held up a paw.  "Don't tell me.  You're lookin' for mice.  Of course.  MOUSES!"

Mason turned toward her brother.  Holding up a small mouse by its tail, a broad smile formed across her face.  "Hold onto this," she instructed Seville.  "I need one more."

Now holding the mouse himself, Seville looked at it closely.  "Is that you, Norman?"  The mouse shook his head and squeaked out a negative reply.

As if in reply, the mice squeaked in unison.

"I don't need any help from you two," Seville told the mice.  "You, on the other paw, might need some help from me."

The mice nodded in agreement.

"Cinderella?" Seville squawked.  "Ah, I see it now.  The pumpkin that turns into a carriage.  The mice - they're the pawmen or somethin', right?  All you need now, is a Prince Charming."

"A knife?  You're gonna stab Prince Charming?  You're goin' to the ball as a murderous Cinderella?  Like that guy in the movies with the hockey mask and stuff?  You're gonna turn a lovely fairy tail into a horror story, Mason?  Again I must question why they call ME the weird one. MOUSES!"

"You are weird, Seville.  I need a knife to carve the pumpkin.  I need to carve it into a carriage, because it's not like I have a fairy godmother with a magic wand to do it for me."

"You could always ask the peep for help," suggested Seville.

"I can do this myself," and with that, Mason ran into the house.  Moments later, she returned with a carving knife in tow.

Mason walked around the pumpkin several times, examining it carefully.  Seville and the two mice watched her, shaking their heads in dismay.  Every now and then Mason would let out an "Uh-huh," or a "Hmmm..." under her breath.  Finally, she stopped in her tracks and declared, "I think I shall begin carving right here."  Holding the knife high with both front paws, she brought it down, stabbing the pumpkin with a mighty thrust.

Right before their eyes, the pumpkin let out a loud swoosh of air, and slowly began to deflate. 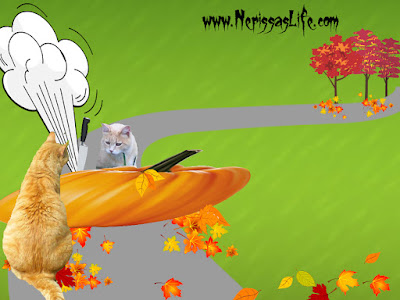 "This is what happens when you do business with weasels, Mason.  Those vermin sold you a lemon."

One of the mice tugged on Seville's fur.  The cat bent down so that the mouse could whisper in his ear.  "You're right, there, little feller.  They didn't sell her a lemon.  I think it was some sort of round, inflatable thing."  The mouse nodded his head in agreement.

"WHAT AM I GOING TO DO?" Mason wailed.  "The ball is on Tuesday.  It's too late to come up with another costume.  Ohhhhhh...." she sobbed.  "This is the going to be the WORST Hallowe'en, EVER," and stomping her paws, she wailed a little more.

"Wait a minute," and Mason grabbed Seville by the whiskers.  "YOU'RE orange."

"Of all the moused-up, stupid ideas.  I will NEVER live this down.  I'm gonna be the laughing stock of the neighbourhood.  I'm gonna be..."

Into the ballroom strode Seville, with the two mice - now dressed in costumes suitable for footmen -  perched on top of his head, right between his ears.  And there was Mason, sitting on his back, wearing glass slippers on her paws, and a sparkling emerald collar around her neck.

"How you ever talked me into this," Seville grumbled, "I'll never know.  And starting first thing tomorrow morning, Mason, YOU, my dear sister, are goin' on a diet.  MOUSES!" 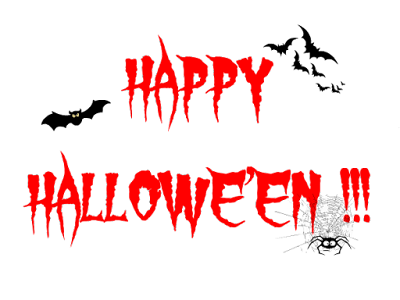