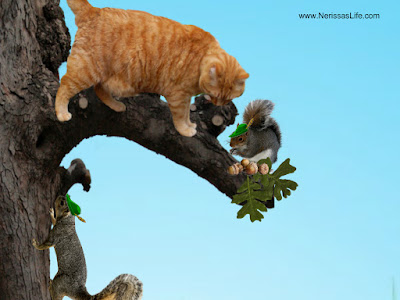 Seville, Mason, and the squirrels hid in the oak tree, while the Sheriff and his men milled about below.  Every now and then a horse would rear up on its hind legs, and Seville was sure someone would look up, spotting them, but instead they seemed more content to bicker amongst themselves. "Just like me with my fur-sibs," Seville whispered to himself.  "Hehehe..."

"Neither hide nor hair.  There is not a trace of them to be found," stated one of the men.  "'Tis time we return to Nottingham to ensure we are back by nightfall," and with that, the men galloped off on their horses, in the direction from where they had originally come.

Once out of sight, the squirrels scampered down the tree.  Mason and Seville followed.

"Who were those men?" Mason asked, "and why were they looking for you?  I assume it was you they were after."

"Those are the men we believe to have captured our friend, Robin," said one squirrel.

"And may be holding him captive as we speak!" piped up another.

Seville sat back on his haunches, for this was the position in which he always did his best thinking. "Hmmm...  I don't think they have your friend.  I have a sneaking suspicion that someone told them to look for you by this oak tree.  After all, they did come all this way and stop right here.  It's like they had intel or somethin'.  But if that intel had come from Robin, surely he would have told them you'd hide in the tree.  Up in its branches.  But none of 'em ever looked up.  I thought they were gonna, for sure, but no one did.  Their intel must have come from somewhere else."

"But if the Sheriff and his men don't have Robin, who does?" asked one of the squirrels.  "If Robin could come home, he would.  He must know we're worried about him.  The only way he wouldn't come home is if he couldn't come home.  Couldn't because he was being held captive."

"Perhaps he's being held captive by someone other than the Sheriff," suggested Mason.

"Well that's all we need!" and one of the squirrels threw the acorns he was holding up into the air. "ANOTHER enemy running about, trying to imprison us."

Seville narrowed his eyes.  "I don't suppose you've ever encountered anyone form the Weasel Syndicate, have you?  'Cause this is just the sort of thing those dastardly weasels would do."

Seville waited for the squirrels to answer but was met with nothing but blank stares.

"Guess not.  Guess there aren't any weasels involved.  But somebody sure did tell those men where to look for you, and your friend Robin is missin' and..."

"But there's no evidence that the two are actually connected," interjected Mason.  Robin might be missing for an entirely different reason and, I suspect, it has something to do with this oak tree."

"You believe it is the tree holding our friend captive?" asked one of the squirrels.  "Because if you do, you sound very foolish, indeed.  An oak tree holding a squirrel captive.  Ridiculous!"

"It does sound kind of hinky, sis," Seville hissed under his breath.  "We have an oak tree back home and we have lots of squirrels, too.  Never once have I ever seen any of 'em bein' held captive. MOUSES!"

"BOYS," and Mason stomped a paw with disgust.  She grabbed her measuring tape and held it up in the air.  "Do you remember how, before I was so rudely interrupted by those men on horses, I was trying to explain to you about the size differential between this oak tree and the one in our driveway? Well I won't go into too many details because the math is very complicated and I doubt any of you would understand..."

Seville opened his mouth to say something but thought better of it.

"So I'll jump right to the chase.  This tree and the tree at the end of our driveway are interconnected, Seville.  There's some sort of spacial conduit network between the two."

"It has nothing to do with magic," Mason scolded, "unless you squirrels were magically shooting arrows at my brother and me earlier today."

"I MEANT AT OUR HOUSE!"  Mason took a deep breath to calm herself.  "Remember?  Remember the arrows that were shooting out of the tree at us, when we were back at our own house, in our own yard?"

The squirrels looked at one another and began to chatter, discussing the situation.  "We weren't shooting any arrows at you at all until, as if by magic, you appeared by this tree."

"Well before we appeared by your tree, we were by OUR tree in our very own yard, nowhere near this tree of yours, and there were arrows comin' at us left, right and center.  MOUSES!"  Seville glared at the squirrels.  "So what do have to say to that?"

Mason stepped between her brother and the squirrels.  "That's what I'm trying to explain, Seville. They weren't shooting at us.  They were shooting at the tree.  Isn't that right?  Target practice or something like that?"

The squirrels all nodded their heads in agreement.

"The arrows must have hit the tree and been transported to twenty-first century Canada by the spacial conduit network.  And then you and I, while investigating the appearance of the arrows, were transported here."

"But what does this have to do with our missing friend?" demanded a squirrel.  "Is it your claim that he has been transported to another land?  BY A TREE?"

"Well not by the tree, exactly, but by the spacial..." 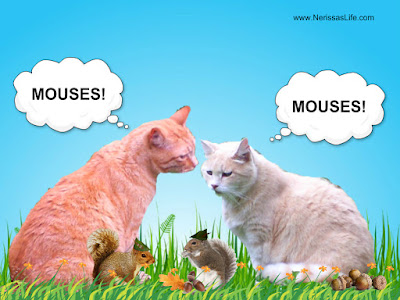 "But of course he did!" cried a squirrel.  "We told you when you first arrived:  Robin climbed the oak tree in search of acorns, and we never saw him again."

"Uh Mason..." and Seville pulled at his sister's tail again.  "I don't suppose you've given any thought to usin' that spacial conduit network to get us back home, have you, 'cause I really need to use the litter box, and I don't see any litter boxes lyin' about 'round here and..."

"Oh go do your business behind one of those trees over there!" and Mason pointed toward the edge of the clearing.  "BOYS.  Now where was I..."

"You were explaining that Robin is being held captive by the oak tree."

"TOLD YOU THEY WOULDN'T UNDERSTAND THE FINE NUANCES!" yelled Seville from the edge of clearing.

"He had BETTER not be lost!" cried Seville, who had returned to Mason's side after doing his business.  "Mason, if Robin is trapped in twenty-first century Canada, we're trapped here.  Here. Wherever this is.  Not to mention whenever."

Be sure to return Wednesday for the conclusion of our adventure.

Posted by Seville at Nerissa's Life at 20:35