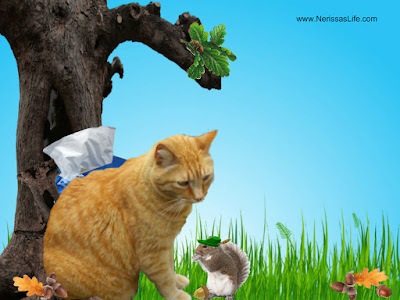 "He had BETTER not be lost!" cried Seville, who had returned to Mason's side after doing his business.  "Mason, if Robin is trapped in twenty-first century Canada, we're trapped here.  Here. Wherever this is.  Not to mention, whenever."

"This is bad, Mason.  This is really, really bad," Seville muttered.

Mason nodded in agreement.  "You can say that again."

"This is bad, Mason.  This is really, really bad."  Seville noticed the unamused expression on Mason's face and added rather sheepishly, "Sorry."

A small squirrel approached Seville.  Looking into the cat's eyes he asked, "Is our friend Robin never to come home?  Never?" he sniffed loudly.

Seville reached up behind him and grabbed a tissue.  "Here you go, little buddy," and he gave the squirrel the tissue to wipe his eyes.

Like a flash of lightening, Mason swiped a paw and grabbed at the tissue.  "Where did you get this?" she demanded.

Seville twitched his whiskers.  "It's just a tissue, Mason.  It's not like I stole the Royal Jewels or anythin'.  MOUSES!"

Mason held the tissue before the little squirrel.  "Have you ever seen a handkerchief like this before?" she asked.

The squirrel accepted the tissue, rather gingerly, and examined it a moment before using it to wipe his eyes and then blow his nose.  Seville's eyes opened wide with amazement at the sound.  "Such a big honker for such a little squirrel.  MOUSES!"

Dabbing at his eyes again, the squirrel answered, "'Tis a hankie.  There's nothing odd about that, except...  Except..." and he rubbed the tissue between his paws.  "It is made of paper, and not cloth?  How very odd indeed."

The other squirrels gathered around, all wanting to see the strange paper handkerchief.  Seville reached behind him again, grabbing another tissue.  "Here, this one's clean," and he laid it down before the squirrels.

"Where the mouses are you getting those tissues?" Mason asked Seville.

Seville rolled his eyes.  "Mouses Mason, from where do you think?  I got 'em from that box of..." and he dropped his jaw.  "MOUSES!"

Mason and Seville carefully examined the tissue box protruding from a hollow in the oak tree.  A hollow that had not been there earlier.  Very slowly, they both walked around the tree;  Mason clockwise and Seville, counterclockwise.  Meeting up at the box of tissues again, they stopped. Mason touched the box with a paw.  It felt like an ordinary box of tissues.

"Mason," Seville hissed.  "I don't think they have paper tissues like that in this time period."

"Tell me something I don't know," Mason hissed in return.  "That box of tissues is from our time period, and not that of the squirrels.  "Plus, the hollow in the tree is back."

Seville sat back on his haunches, for as mentioned earlier, that was the position in which he always did his best thinking.  "You think the spacial conduit network is back up and runnin', sis?  'Cause you know...  If it is..."

"We can get home!" Mason finished her brother's train of thought.

"But what of our friend Robin?" the squirrels asked in unison.

"It is not that we do not like you," began one squirrel, "but you are both cats and we, squirrels.  A cat is the mortal enemy of a squirrel.  Also, we dearly miss our good friend."

"Don't worry," Seville comforted the squirrels.  "My sister and I will think of somethin'."  Turning to Mason he asked, "You think of anythin' yet, sis?"

Mason was studying the box of tissues.  "The hollow in the tree is smaller than it was before," she murmured.

"Well it is the entrance to a spacial conduit network."  Thinking Mason looked confused, Seville added, "You know, 'cause different sizes fit into different spaces and things.  Spacial...  Space,,. Mouses Mason, don't you know anything 'bout this stuff?"

Seville pushed Mason out of his way and put one front paw into the tree's hollow, before putting in the other, and then his head.  He looked down.  Way, way, down.  "Hey sis!" he hollered.  "The hollow might appear smaller on the outside, but inside, it's a huge cavern.  Just like it was when we entered the hollow at the tree at our house.  Pass me that box of tissues, would ya?"

Way, way down at the bottom of the cavern inside the tree, Seville spotted the tissue box and next to the box, there was a small opening.  Hanging over the edge of the opening was a small squirrel wearing a little green hat.  And in his paws he held a bowl full of acorns.

"Hey Robin!  Is that you Robin?  Robin of Sherwood Forest?" cried out Seville.

"'Tis I," answered Robin.  "What spirit calls to me from the bottom of the hollow within the great oak tree?"

"I know how to get home!" Seville cried excitedly.  He tried to back himself out of the tree's hollow but realized he was stuck.  "Awww...  MOUSES!  Stupid spacial conduit network changin' sizes and stuff.  Makin' me look fat.  A ginger lad eats one too many treats and the next thing you know..."

"What on earth are you going on about?" asked Mason from outside the tree.  "And who's in there with you?"

"Never mind that, sis.  Just hold onto my tail, like you did at our house when we first fell through the tree, and whatever you do, DON'T LET GO.  Oh, and you're gonna have to give me a good shove. Maybe get the squirrels out there to help push.  Openin' is a bit of a tight squeeze, I'm afraid."

"But what of Robin?" Seville heard the squirrels outside the tree ask.

"Don't worry pals.  He's on his way!  Just give Mason a good shove, okay?" Seville told them.  Then he called down to Robin and told him to climb through the hollow in the tree and jump.

Down, down, down Seville and Mason fell.  As before, the hollow within the tree was much larger than the oak tree itself.  About halfway through their journey, they passed a squirrel wearing a hat and clutching a bowl of acorns.

"Yup, that's Robin!" Seville answered with a smile.  "On his way home to his pals." 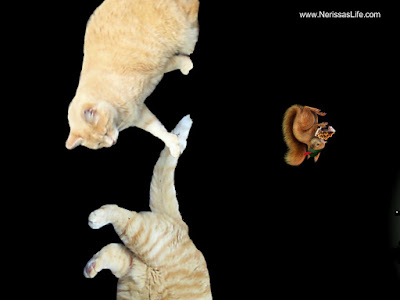 Three Mississippies later - for Seville had been counting - the two cats landed with a thud, before somersaulting forward and tumbling straight through the hollow at the bottom of the cavern, finding themselves sitting next to their very own oak tree, which stood at the end of their very own driveway.  They silently sat for a moment, gazing at the welcome sight before them:  their very own house.

Seville and Mason both heard Peep #1 calling them for dinner.  Scrambling to their paws, they raced toward the house and inside, although Seville did spare a moment to glance back toward the oak tree, and he sighed with relief when he saw the hollow in the tree, the entrance to the spacial conduit network, slowly disappear, before his very eyes.

Posted by Seville at Nerissa's Life at 20:42