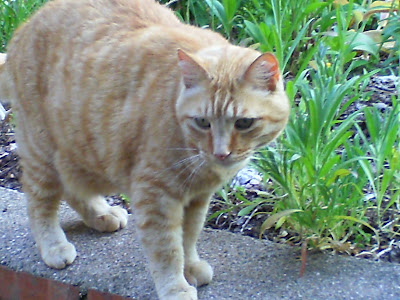 So there I was, minding my own business, spying on the neighbours from my office window when...

Hmmm...  That doesn't sound all that good.

So there I was, minding my own business while gazing out my office window in the direction of the neighbours' house...

So anyway, I was looking out my office window and what did I see?  Snow.  That's right.  SNOW. On the 26th of April.  Could you believe it?  MOUSES!

Of course, I immediately did what any self-respecting cat would do.  I ran to the side window to check if it snowing out there, too.  And do you know something?  It was.  It was even snowing at the back and front doors.  It was snowing everywhere!

BREAKING NEWS...  It was snowing at my house, yesterday.  MOUSES!

But the fact remains, it was snowing.

Clearly, there's something wrong with ol' Miss Spring.  Ol' Miss Spring must have a fever or something.  She's running hot and cold.  One day it's sunny and nice and the next?  It's snowing. MOUSES!

If you ask me, I think Ol' Miss Spring has spring fever, for sure.

Even if there wasn't a whole lot of snow, there was still snow.  Dare I say it again?  Of course I do.  MOUSES!

And just think, had I not been being nosey, spying on the neighbours' house...

Had I not been doing my civic duty, gazing out my office window and making sure everything was right in the neighbourhood, I wouldn't have noticed that snow in the first place and I wouldn't have realized that Ol' Miss Spring has spring fever.

But what does a season take for a fever?  Anyone know?  Is there a pill for that or something? Maybe a tonic of some sort?  Or a shot?

And exactly how does one verify that fever, in the first place?  I'm only asking because last time I had an appointment at the doctor's, the doctor took my temperature and...   well... Well we won't get into that.  Suffice it to say, taking kitty's temperatures isn't all that fun for kitties, if you know what I mean.

What's that, Peepers?  It's not all that fun for the doctor, either?

Well then why the mouses does she do it in the first place?