Have you even looked outside, Peepers?  It's minus ten or fifteen degrees out there. MOUSES!

Sometimes I wonder 'bout my peep.

There I was yesterday, mindin' my own business, socializin' on social media, when Peep #1 started haulin' out bags of potting mix and whatnot. She was plannin' on doin' a little gardenin' but the garden was covered in a blanket of snow on account of it bein' winter and all.  Again I say, MOUSES!

If Peep #1 was thinkin' it was spring already, Peep #1 was definitely feelin' unwell 'cause the weather was anythin' BUT spring-like.  The weather outside was frightful.  But my dear...  Oops! Sorry 'bout that.  Those lyrics just popped into my head for some reason.

Anywho...  It was not spring.  It is not spring.  It's winter and this is Canada and there's snow, everywhere.  Plus, it's cold.  Really cold.  Colder-than-shiverin'-ice-cubes kind of cold.  Hmm... Do ice cubes shiver?  Bet they would if they were to step outside my front door yesterday 'cause it was that cold, for sure.  MOUSES!

Clearly, the peep was feelin' hot when the temperature was really cold so obviously, she was feverish.  Yup, that was the only way to explain it.  The peep had a fever.  She must have been bitten by the flu bug.

Now I don't know 'bout you but I have never seen one of these flu bugs, myself.  I'm thinkin' they're like fleas except instead, they're flues.

The peeps dab us cats on the backs of our necks with stinky stuff to prevent fleas from bitin' but there doesn't appear to be a preventative flu bug dabber stinky thing for peeps.  Oh sure, Peep #1 is known to wear stinky stuff but the stinky stuff she wears doesn't appear to protect her from the flu. First of all, she likes wearin' it.  Can't be effective if you like it, I say.  Secondly, she doesn't put it on the back of her neck.  She puts it on her wrists and behind her ears and calls it perfume.  It is stinky though.  I'll give her that.  MOUSES!

Nope, peeps have to have shots to prevent themselves from bein' bitten by the flues.  Once a year, peeps congregate in doctors' offices and pharmacies and allow other peeps to give 'em their flu shots and they do so...  willingly.  Crazy, huh?  MOUSES!

But Peep #1 never gets the flu shot.  The first peep claims she has never had the flu so she needn't bother gettin' the shot.  Let me tell you, next time Peep #1 takes me to my doctor for my shots I'm gonna use that same reasoning to get out of 'em.  If it works for the peep...

Unfortunately, I don't think that line of reasonin' will work for me.  Peeps are kind of known for their hypocrisy and whatnot.  Nope, that won't work for me, at all.  Dare I say it?  Yup, gonna have to. MOUSES! 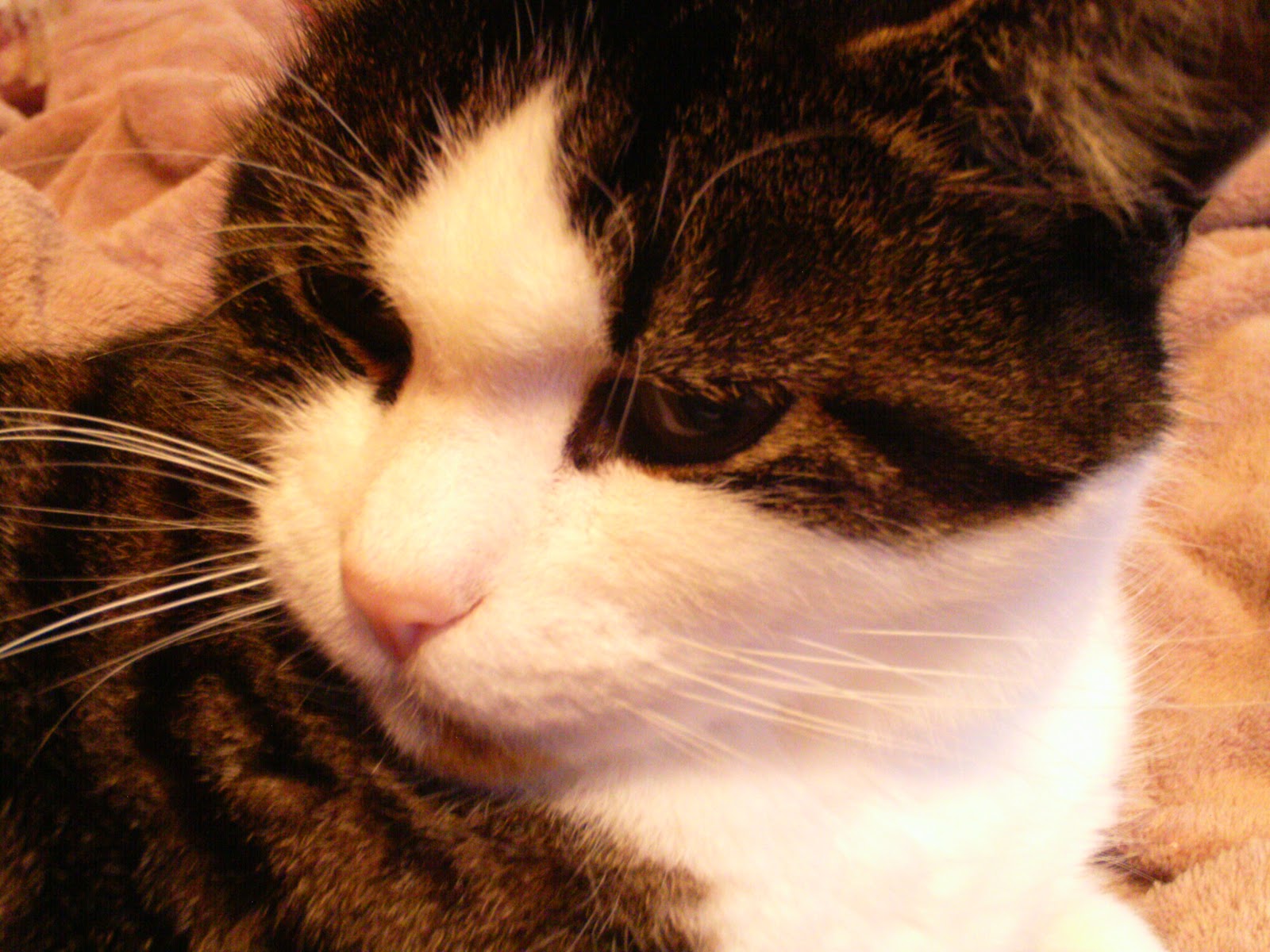 Perhaps the peep had so far avoided bein' bitten by one of those nasty flu bugs but it appeared to me that this year, her luck had run out.  Like I said, she was clearly feverish and, judgin' by her actions, she was delusional, too.

I know what you're thinkin'.  How could I tell?

Well the freezin' temperatures outside coupled with the white stuff all over everythin', everywhere, indicated that that it was still winter and yet, the peep was clearly thinkin' that it was spring. That, my friends, is delusional behaviour.  There's no other way to describe it.  I was guessin' that after finally bein' bitten by one of those flu bugs, the peep had developed a fever.  Her fever had become so bad that she was startin' to hallucinate.  I was beginnin' to worry 'bout my peep.

If the peep's fever was brought on by a flu bug, the peep must have brought flues into the house. The house would have to be treated as well as the peep.

Should I call my own doctor or the peep's?  My gut instinct was to call the peep's doctor but truth be told, I don't even know his name.  I do, however, know the name of my doctor so I decided to call her.  Perhaps she could give the peep a pill or somethin'.

But would the peep take a pill willingly?  Would I have to pill the peep?  Pill the peep like the peep sometimes pills me?  Perhaps I could call up that Karma person and ask her to pill the peep for me. I've heard she's willin' to do stuff like that.

Anywho...  I was just lookin' for my doctor's number when the peep came over to me and asked what I was doin'.  "Nothin'," I told her as I knocked the phone book onto the floor.  The peep bent down to pick it up and as she did, I touched her forehead with a paw.  MOUSES!

The peep's forehead was cool to the touch.  She wasn't feverish at all.  It didn't make sense.  Was she not suffering the ill effects of catchin' the flu?

Apparently, the peep did not have the flu.  Apparently, she had not been bitten by a flu bug at all. Apparently, she was sufferin' from somethin' else.  I breathed a sigh of relief that I had not found the number for those Daleks.  Nothin' good ever comes of calling them.

A weird mixture of spring and cabin fevers had brought on the peep's odd behaviour.  Whether it was spring fever with a touch of cabin or cabin fever with a touch of spring, we will never really know but either way, I was right about the fever.  Yup, I was right about that, for sure.  She really was feverish but it was a weird kind of fever that affects behaviour and not body temperature.

Hmm...  I wonder if they have a shot for this spring/cabin fever thingy.  Next time I'm in to see my doctor, I'll ask. Maybe she can give the peep a pill or somethin' or better yet, somethin' stinky to dab on the back of the peep's neck. I shall have to investigate this illness further to see if there are preventative measures to avoid future outbreaks. We need to prevent bringin' such ridiculous illnesses into my house.

And once more for good measure I must say - just 'cause I wanna and of course, 'cause I can - MOUSES!

Posted by Seville at Nerissa's Life at 19:35