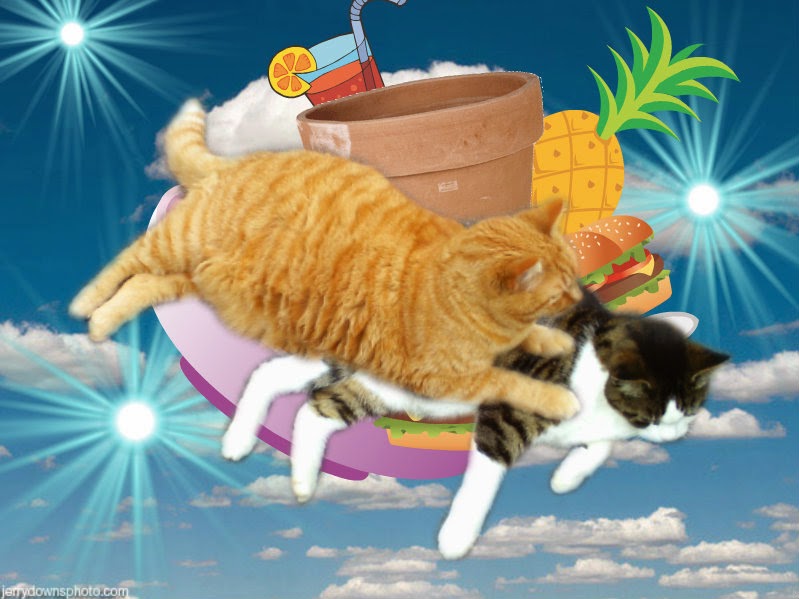 Trying to roll the flower pot had proved futile.  Being wider at one end than the other, it continually insisted upon travelling in circles.  Half dragging, half pushing the pot, Nissy eventually made it into the kitchen.  "MOUSES!  Hey Sivvers, help me with this, would ya?"

Seville sauntered over to Nissy, giving the flower pot a good sniff.  "What's up with the pot, Nissy?  You planning on planting some nip?"

"Something like that," Nerissa answered.  "We're goin' on an adventure."

"Excellent!" declared Seville.  "Where to?"

Nerissa continued, "There's more talk about the Turks and Caicos Islands joinin' Canada, Seville. Those islands are supposed to be a real tropical paradise.  Sunpuddles and sand as far as the eye can see.  You and I are gonna do a little investigating.  Check those islands out.  Get a paw or two in on the ground floor and plant the seeds that if peeps there wanna join Canada, they should join Nova Scotia, too.  Now, help me get this pot into the flying frying pan."

"That why we're packin' the flower pot?" asked Seville.  "Is it because we're going to be planting the seeds?"

Nerissa rolled his eyes and shook his head with exasperation.  "Nah, the pot is for a plumie.  We're gonna bring back a plumeria tree from the Turks and Caicos Islands for Peep #1 as a prezzie. Heard they grow well there."

Working together, the two brothers managed to get the flower pot into the teleportation device. Grabbing a few snacks for the trip, Nissy climbed in, followed by Seville.  Moments later, the cats were teleporting due south, towards the tropical paradise of the Turks and Caicos Islands.

On the way, Nerissa explained to Seville how the Premiers of Saskatchewan and Prince Edward Island were both hinting they would like the Turks and Caicos to join one of their provinces.  "They were tweetin' stuff 'bout it all over the place," Nissy said, "but anyone lookin' at a map of Canada would see immediately that a union with Nova Scotia makes the most sense, geographically."

"And think about all those snowbirds that travel from Nova Scotia to Florida and Mexico and whatnot. Bet they'd much rather travel to the Turks and Caicos Islands if those islands were part of their own province.  Apparently tourism is a big part of their economy, just like it is with ours.  We have a whole lot in common, you know."

"But I heard that Ottawa put the kibosh on that whole annexation idea," interjected Seville.  "I was nappin' with the news on and that's what I heard."

"We don't need Ottawa, Seville," answered Nerissa.  "I did some background investigatin' and found that way back in 2004, when I was only one-year-old and before you were even born, the Nova Scotia Legislature voted unanimously to invite the Turks and Caicos Islands to join our province. UNANIMOUSLY.  You have any idea how hard it is to get those politicians to vote on anything unanimously?  Almost impossible, I tell you.  They must really want this and I'm thinkin', so do I." 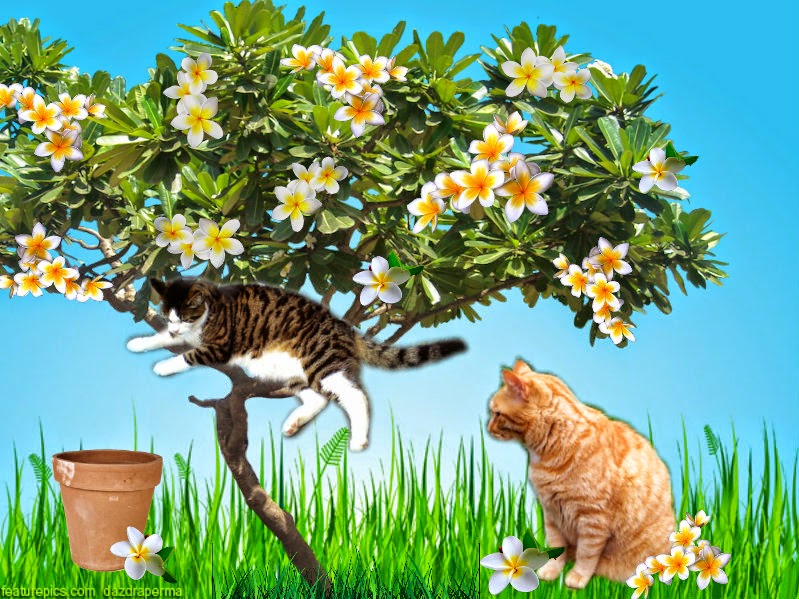 Landing softly on a sun drenched beach, the boys stepped out of the teleportation device.  The warm sand tickled the pads of their paws.  They both stretched out and did what any self-respecting cats would do when confronted with sand...  roll in it. "Ohhh...  a sand bath," moaned Seville, luxuriating in the soft bed that was the beach.

Half an hour later or so, Nerissa stood up in the sand and gave himself a good shake.  "Come on Sivvers," he instructed.  "We need to explore the islands and find ourselves a plumeria tree.  Help me with this flower pot, would you?"

Pushing and dragging the flower pot up a hill and away from the beach, Seville muttered something about how they should have teleported directly to wherever the plumies grew.  The flower pot was proving most uncooperative.

The cats could see beautiful island resorts off in the distance but Nissy wisely suggested they head in the other direction.  "Remember, we're lookin' for a plumeria to take home with us, Seville.  We wanna find one that doesn't belong to anybody.  Peeps workin' in those resorts might object if we take one of theirs."

Eventually they came to a grassy clearing and in that clearing, they found a plumeria tree.  It was the most beautiful tree the cats had ever seen.  Far more beautiful than any of Peep #1's plumies. Not only was it considerably larger than any of her potted plumeria but also, it was blooming. Nerissa inhaled deeply, enjoying the exotic fragrance of the flowers.  "Isn't it glorious?" he asked his brother.

"Sure is," agreed Seville.  "How are we going to dig it up?  We forgot to pack spades."

Nissy climbed up into the plumeria tree to see where he and his brother should starting digging. "Hmmm...  Oh-oh.  We might have a little problem here."

"What kind of problem?" Seville asked.  "You think we'll need those spades after all?"

After careful deliberation Nerissa cried in frustration, "MOUSES!  No way, no how, is this tree gonna fit in that pot, Sivvers."

"Yeah, I kind of figured that," Seville agreed.  "I came to the same conclusion about an hour ago."

"What?  Then what have you been thinkin' about for the past hour?"

"Dinner, mostly," answered Seville.  "It has been a long time since we ate those snacks earlier. Why don't we go find ourselves a restaurant and order up some nosh?  I saw a gorgeous resort over that way," and he pointed a paw in the direction of the beach.  "Bet they have some really nice restaurants over there."

"Yeah...   why not...   whatever.  Looks like the plumie tree is a bit of a bust.  Pick some flowers for Ol' Peepers and put 'em in the flower pot, Sivvers.  That's the best we'll be able to do.  Then we'll head on down to the beach and find ourselves some drinks and some snacks.  They're supposed to have great fishin' in these here islands.  We'll get us some fish and some drinks, enjoy a late dinner and some fun in the sun and then head on back to Nova Scotia.  Maybe I'll try my paw at surfin'. They probably have surfboards to rent.  Come on Sivvers..." and the two cats made their back to the beach area in search of dinner and surfboard rentals.  "Hop to it, Sivvers!  Make sure none of those plumeria flowers fall out of that flower pot.  I'll lead the way." 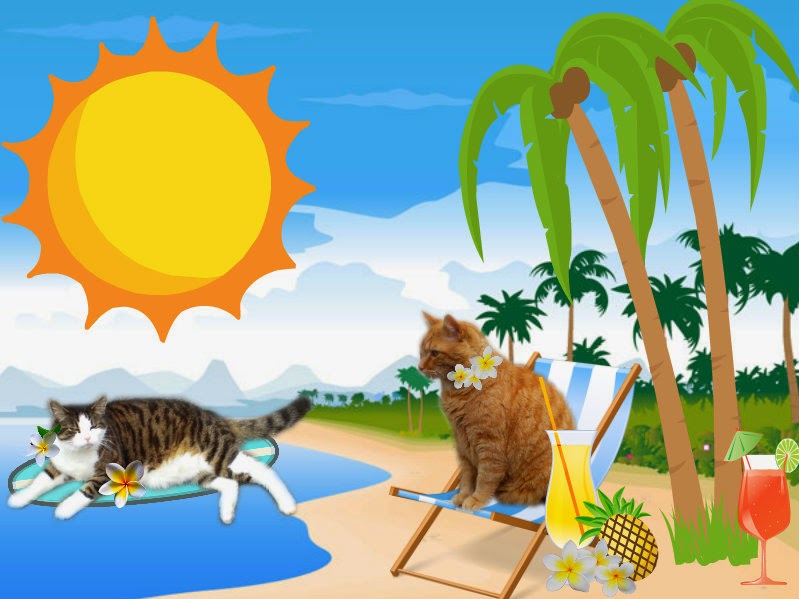 "Ummm...  Nissy?" Seville's voice was muffled by his efforts to drag the flower pot.  "Wanna help with this..."

"What's that, Seville?  Hmmm...  hold on.  I'm currently calculatin' the best route back to the beach.  Hurry up with that flower pot, huh?  Time's a-wastin' and dinner is a-waitin'!  Try not to dilly-dally quite so much."

"MOUSES!" Nissy muttered under his breath.  "You'd think I was askin' him to do the impossible.  Drag a little flower pot down to the beach.  Really, is that too much to ask?  Mouses, indeed."

Posted by Seville at Nerissa's Life at 10:50