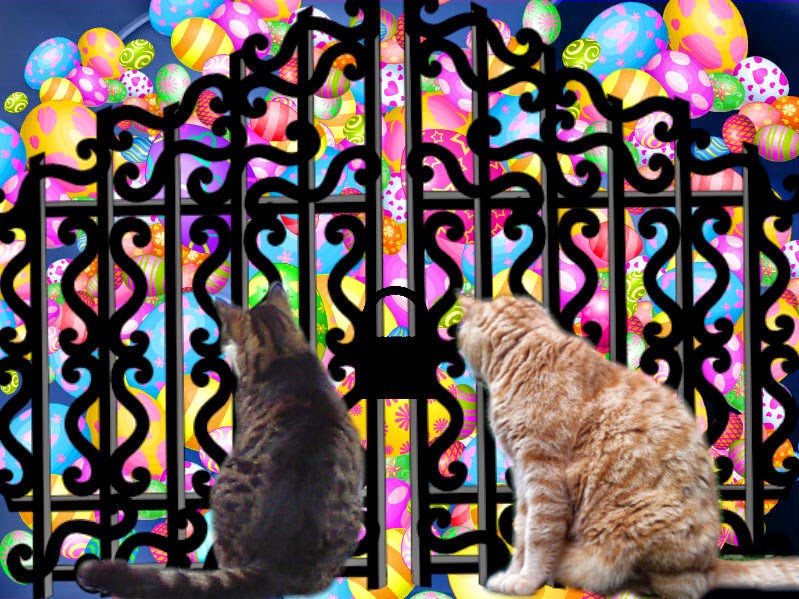 "Nip-filled eggs?  Not a bad idea there, Seville.  Remind me to work up some plans when we get home but first things first."  Nerissa turned to the rabbit and said, "Please, take us to this chocolate vault."

The rabbit led the two cats into the castle, otherwise known as Easter Bunny Headquarters.  They went through a great hall and down several flights of stairs.  Climbing further and further into the bowls of the castle, Nissy began to wonder if they would eventually reach the centre of the earth.

Finally, their downward ascent stopped and they began to walk through a long tunnel.  At the end of the tunnel, they came upon a set of large, iron gates.  Beyond the gates were the chocolate eggs meant to be delivered by the Easter Bunny on Easter morning.

The cats stared into the vault.  "That's a lot of eggs," they said in unison.

"Four billion, nine hundred and sixty-three million, two hundred and fourteen thousand, eight hundred and eleven to be exact," the rabbit informed them.

The two cats looked at one another and then back at the vault doors.  "Yup, that's a whole lot of eggs," they stated again.

Nissy sniffed around him, detecting the smell of chocolate mingling with musty air.  "You really ought to get some better ventilation down here," he suggested to the rabbit before inspecting the large lock, firmly adhered to the gate.

Seville sniffed at the lock.  "It's just a lock, Nerissa.  I think we can maybe break it off if we can't find the key.  Don't know why the rabbits didn't think of that before."

"Because the lock is magic," the rabbit informed them.   "It's a magic lock.  If anyone should attempt to open it without the proper key, the unthinkable will happen."

"The unthinkable?" asked Seville.  "What would that be?"

"Then let's get down to business," began Nissy.  "You told us that the key was either lost or stolen. Let's search the area around the vault in case it was simply misplaced.  I know that my peeps lose keys all the time.  Quite possible that the key was just dropped or something around here."

Nerissa and Seville quickly searched the area around the vault doors as well as up and down the tunnel but to no avail.  There wasn't a trace of a key to be found anywhere and Nissy began to wonder if the Easter Bunny had been wrong to entrust him with the task of saving Easter morning. Leaning back against the tunnel wall, he let out a long sigh.

Nissy's sigh turned into a cry as the wall upon which he was leaning gave way and he found himself tumbling backwards into another tunnel. 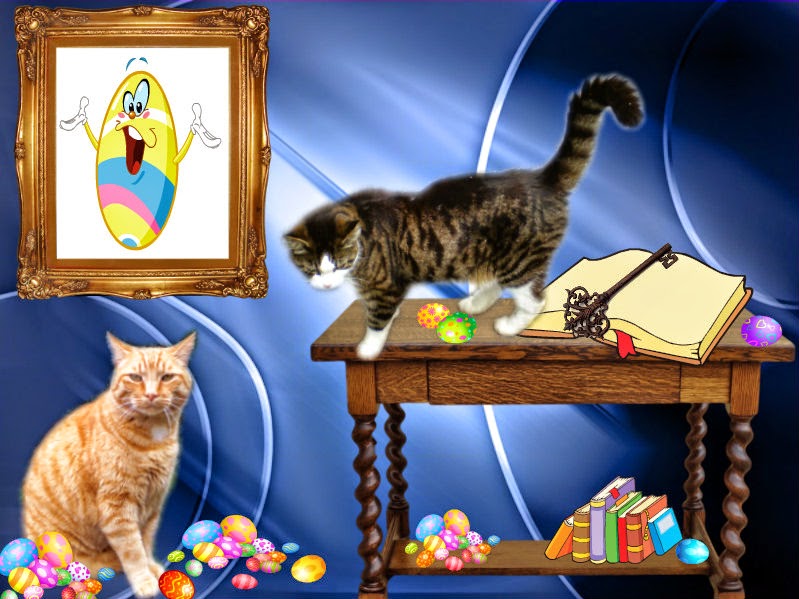 Seville immediately came to his brother's rescue, helping him up onto his four paws again.  "You okay there, Nissy?" he asked.

"I'm fine Sivvers but look at this.  It's some sort of secret tunnel that branches off the main one.  Did you know about this?" he asked the rabbit.

"I had no idea this was here."  The rabbit squinted, trying to peer down the tunnel.  "There's no lighting in there. No self-respecting rabbit would ever use it."

Sure enough, unlike the main tunnel which had been lined with brightly burning torches, the walls of this secondary tunnel were bare.  As cats, Nerissa and Seville could see easily enough with only the little light that bled in from the main tunnel but other species would have far more difficulty.

"You stay there," Nerissa instructed the rabbit, "while Seville and I investigate further."

The two cats quietly padded down the secondary tunnel, making their way around chocolate eggs scattered here and there on the floor.  Eventually, Seville came upon a small piece of paper.  "Look at this," he said to Nerissa.  "Appears to have been torn from a notebook or something.  There are some numbers scribbled on it and it's covered in stains."

Nissy snatched the paper from his brother's paw and gave it a sniff.  "Hmmm..   It smells of chocolate.  The stains on this note are melted chocolate.  Sivvers, you found a clue!"

The cats continued along at a faster pace.  They were in hot pursuit of the missing key and their excitement was mounting.  The tunnel took a sharp turn and they found themselves standing before a wooden door.

Nissy pawed at the door knob and the door opened, inwardly with a creak, revealing a small office barely large enough to house the wooden desk and chair, inside.

Nissy jumped up onto the desk to inspect a large book that had been left open.  "This book is all about commodity prices," he told his brother.  "It's open to a chapter about the commodity pricing of cocoa.  And just look at this!" and he pointed to the iron key resting gently inside the book.

"Never mind that.  Take a look at the portrait hanging on the wall," Seville suggested to Nerissa. "That egg look familiar to you?"

"Do you know what this means?" Nerissa said to his brother.  "That egg who goes by the name of Mr. Egg Sackly has stolen the key to the chocolate vault himself in an attempt to manipulate the world commodity prices of cocoa.  And he did so right underneath the Easter Bunny's nose!  The audacity of that egg.  Can you believe it?"

"What an egghead," piped in Seville.

"And just who are you calling an egghead?"

The cats turned toward the door to see Egg Sackly standing there, blocking their path out of the office.  The egg had an evil grin on his face.

"I see you've discovered my plans, you two little meddling furballs.  How dare you waltz into my private domain."

"How dare we..." sputtered Nerissa.   "How dare you attempt to ruin Easter morning for children all around the world." 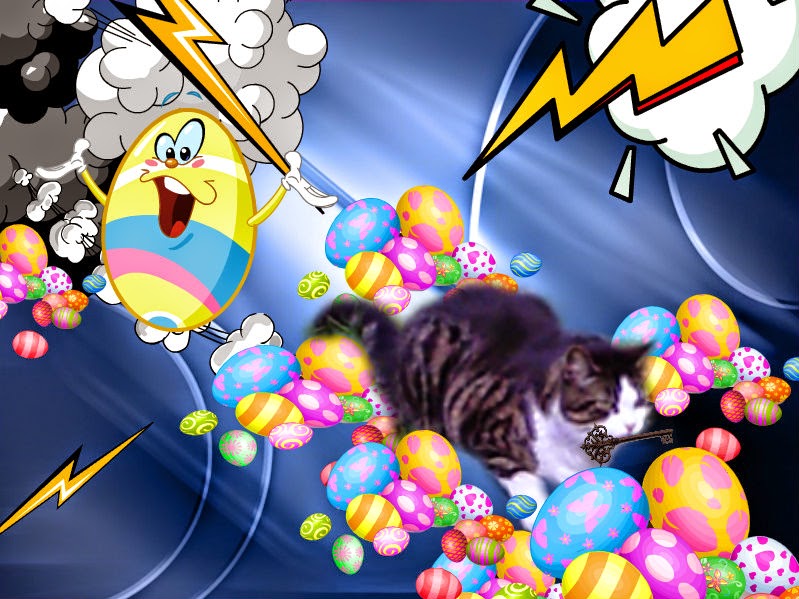 "For generations," rambled on Sackly, "Easter Bunnies have been delivering chocolate eggs to children, belittling the perfection of my ancestry.  The perfection that is the egg.  My namesake.  My very being.  And every year, those rabbits get all the glory for hopping around the world, delivering wonderful, beautiful eggs.  Well it's high time that we eggs see some benefits from Easter morning.  If we can't have the glory, we can at least make a profit from it."  The egg began to prance around the small office which, for an egg with no legs, was quite a feat.

Seeing an opportunity to escape, Nerissa wrapped his mouth around the iron key and at the very same time he yelled, "RUN!" to his brother.  The two cats headed down the secondary tunnel at top speed with Egg Sackly rolling in hot pursuit behind them.

The boys ran as fast as their paws would carry them, skidding into the main tunnel and coming to a halt as they slammed against the tunnel wall.  Moments later, Egg Sackly hit the same wall with a loud, resounding crack.

Nerissa handed over the iron key to the chocolate vault to the rabbit before he and Seville explained all they had discovered in Egg Sackly's office.

"We'll get him the help he needs," the rabbit told the cats.  "Tsk, tsk, tsk..."  the rabbit muttered. "Imagine thinking he could get away with such a thing.  Just wait until the Easter Bunny hears about this."

As Egg Sackly was being carted off to hospital Nerissa, Seville and the rabbit made their way out of the tunnel, through the castle's great hall and into the sunshine.  Nerissa sniffed the fresh air and revelled in the warmth of the sun, caressing his nose.  Seville took a swipe at a butterfly that dared to fly a little too close to him but thankfully for the butterfly, he missed.

The Easter Bunny is ever-so-grateful for all your assistance today, a rabbit informed the two cats. "He says that the two of you really saved Easter morning for children all around the world and wanted me to give you this giant chocolate egg for your Peep #1.  She's a little too old to be having the Easter Bunny stop by on Easter morning but he remembers that she always did love her chocolate."

"Did?  Did you say did?  As in past tense?" asked Seville incredulously.  "Ol' Peepers is still currently a true fiend of the chocolate."

"Yeah, I think the Easter Bunny probably knows that, Seville," Nerissa informed his brother before turning back to the rabbit.  "We will be very pleased to accept this giant chocolate egg and I'm sure the Easter Bunny will understand how Seville and I will have to tell the peep that it's from us cats. Peep #1 has been cracking down on our teleportin' as we seem to have had a few uh...  ummm..."

"We've been gettin' into a lot trouble teleportin' around the world and messin' stuff up, is what Nerissa is trying to say," Seville blurted out.  "Honestly, I don't see what the trouble is.  So we messed up the space-time continuum a few times..." 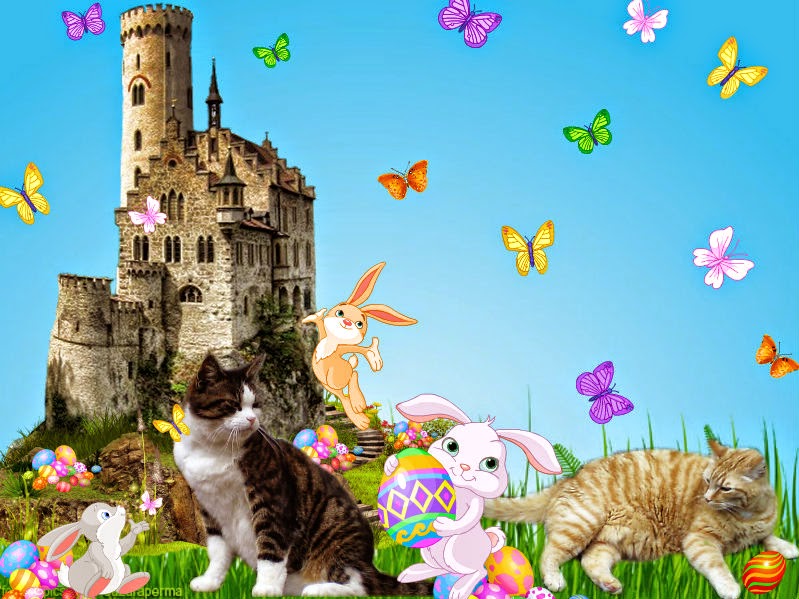 "Anywho..." interrupted Nerissa. "SIVVERS....  PREPARE THE TELEPORTATION DEVICE," he cried and with that, the boys climbed into their flying frying pan with the giant chocolate egg nestled between them.

"As long as this egg really is made of chocolate and doesn't sprout arms and a desire to take over the world cocoa commodities market," Nerissa muttered.  "As long as it's just a plain ol' chocolate egg, the peep should be pretty pleased with what we've brought her, Seville.  Pleased enough to ignore the fact that we've been teleportin' again."

The two cats stared at the giant egg for a moment.

"Yeah, I think it's okay," stated Seville.  "It smells like chocolate to me."

Posted by Seville at Nerissa's Life at 12:53