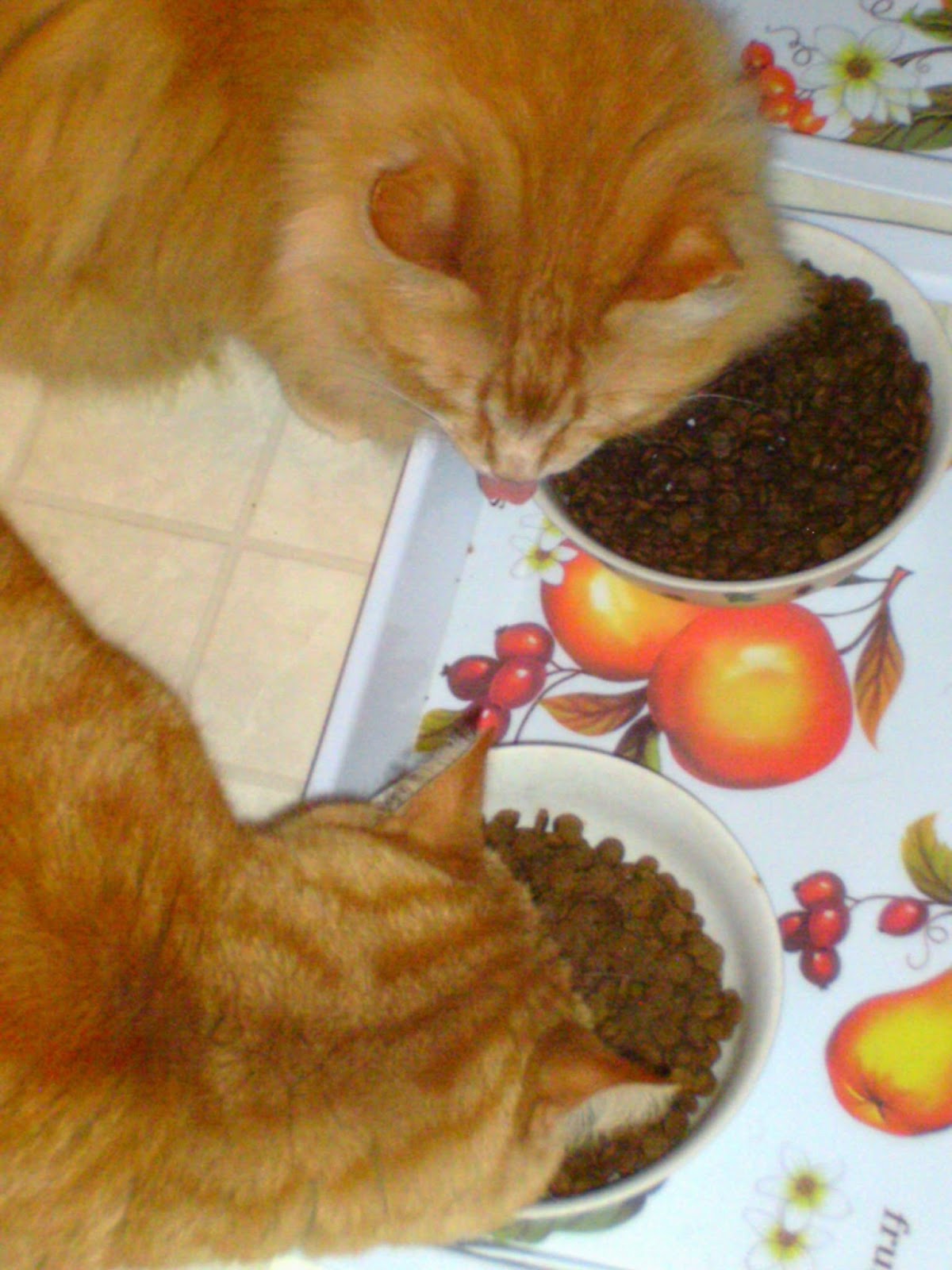 MOUSES!  What's goin' on in my house? What are those noises?  Oh Peepers....   I think there's a wild animal in the kitchen. You wanna check that out?  See what kind of beast is in my house?  Perhaps a horde of raccoons broke in and are makin' a mess in there.

This occurred at my house, last night and when I went to investigate further, what did I find?  I found my brother Rushton munching away at a bowl of dry food.  He was munchin' so voraciously - bet you didn't know I knew the word voraciously - that he was practically inhalin' the kibble and makin' all those weird noises.  MOUSES!

A few hours earlier I, too, had been munchin' away on that very same food.  It was delish!

A little while ago, my good pal Basil who works over at Harringtons - The Natural Choice pet foods, asked me to do a product review of their cat food.  I don't do a lot of product reviews but I had heard good things about the Harringtons foods and Basil is a super great pal so for my pal Basil, I decided that a review was in order.

I was oh-so-very-excited when the peep came home one day and told me I had received mail.  I love gettin' mail and when the mail is a box filled with food, well...  Well let's just say that that's some pretty good mail, indeed.  A few days later, a courier arrived with a smaller package, also for me.  In that parcel were four packages of treats from Harringtons.  Four of 'em!  Another great delivery.

Unfortunately, it was around that time that the Great Flood of 2014 occurred and knocked out the furnace, leaving us without heat or hot water for two whole weeks and so Peep #1 put the box of food and treats away in my office until things were sorted and life was back to normal.  As if life livin' with a cat like me could ever be considered normal.  Silly peeps. 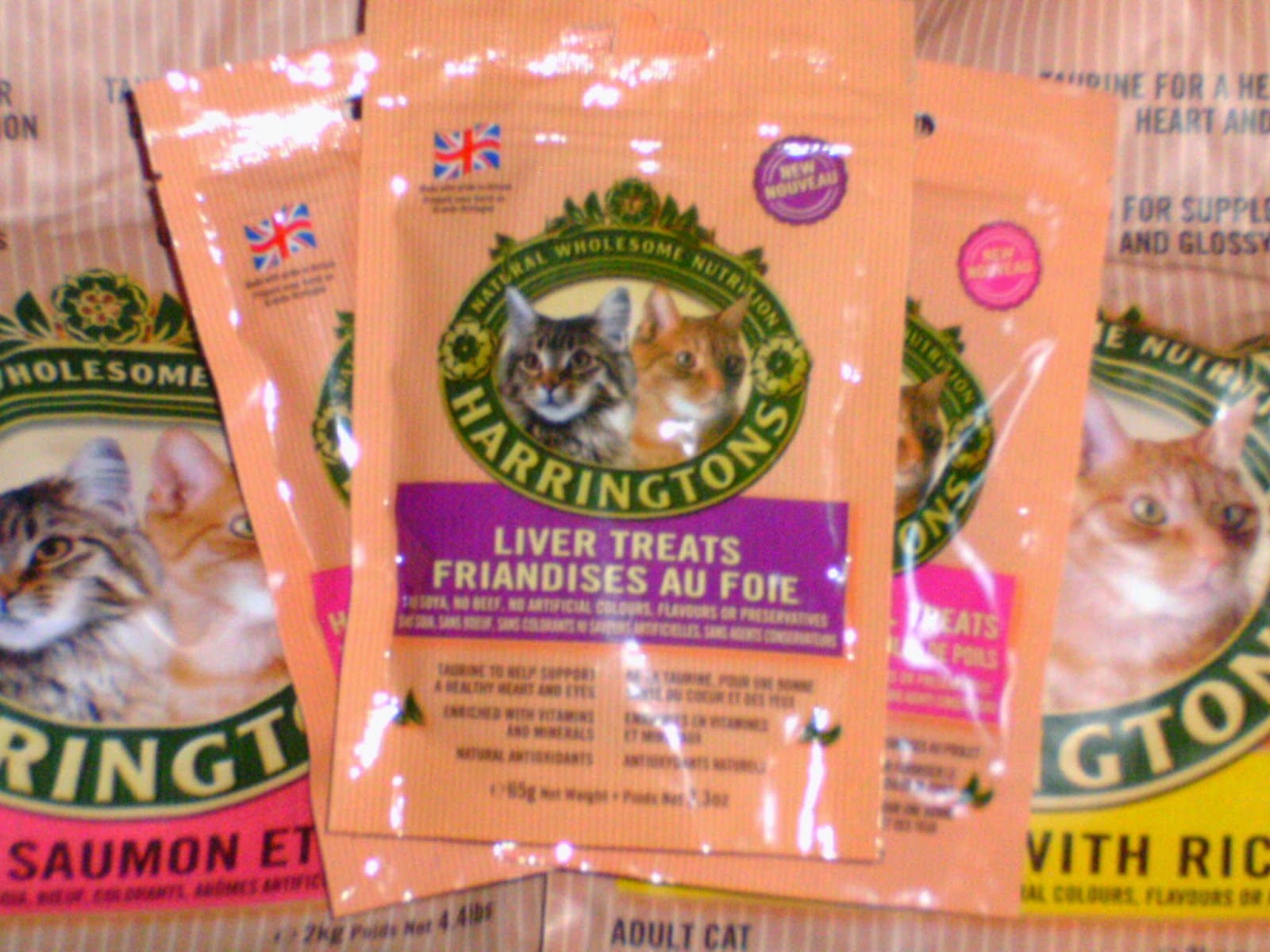 Apparently, once you claw a hole in a treat bag, the delicious aroma of the treats inside overwhelms you to the point where not havin' those treats becomes absolutely unbearable which gives you the necessary motivation to give your peeps those looks that will eventually, undoubtedly, make your peeps give you some of those treats.  So then there were three...  three bags of treats left 'cause I ate a whole bag myself over the course of a couple of days in my office.  They were delish!

After that, the box containin' the food and treats was packaged up with the ends tucked in, in a manner preventin' me from any further access.  MOUSES! 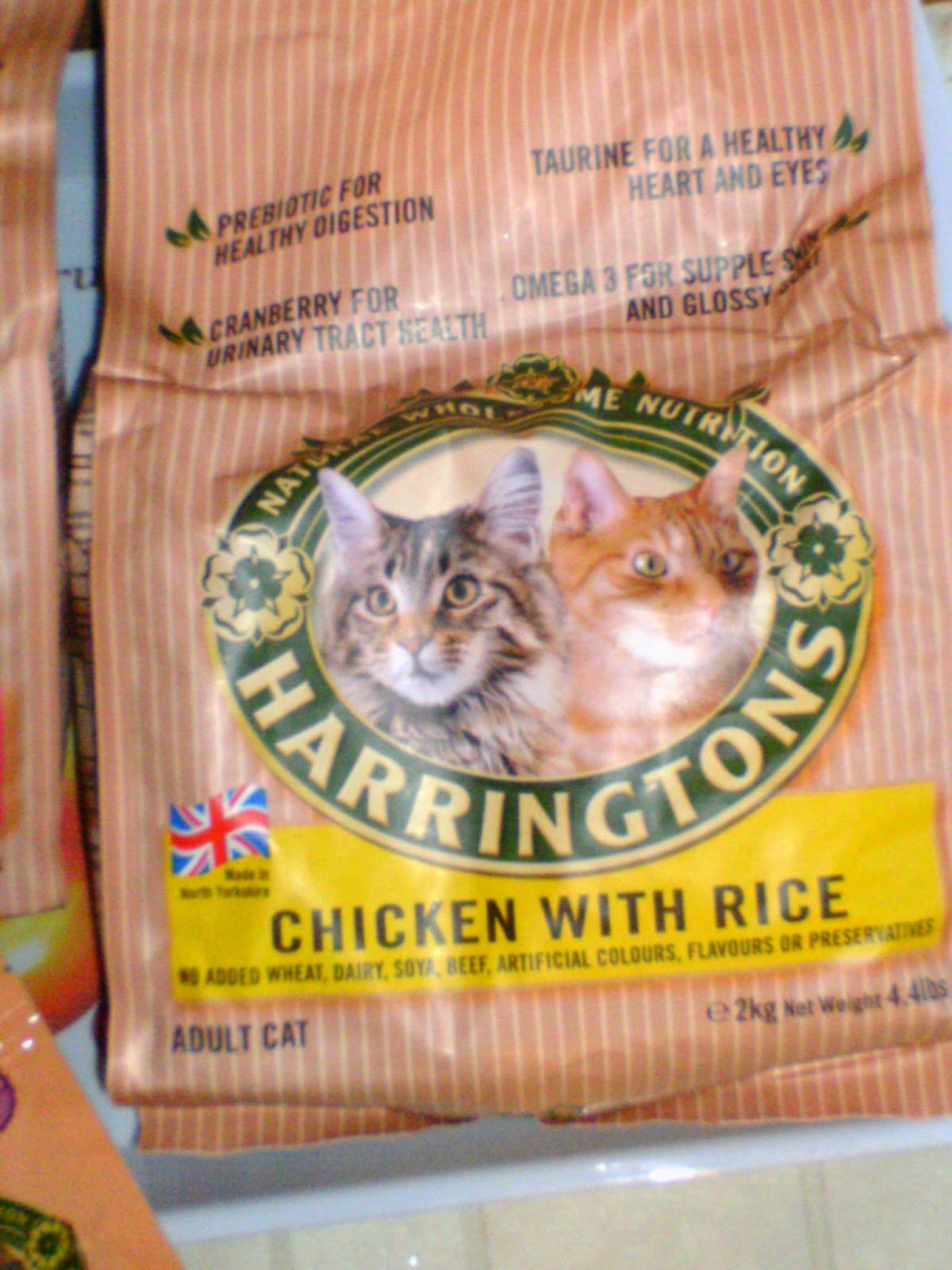 Peep #1 filled up two bowls of Harringtons food for us.  In one bowl she put Chicken with Rice and in the other, Salmon and Rice.  Both bowls were placed, side by side, on a tray in the kitchen.  I immediately went for the chicken variety as did my auntie Blossom later on and even my brother Seville who, I don't think is supposed to be havin' anything other than his special-special 'cause of his crystals issues but Peep #1 let him have a bit 'cause he was pretty excited about the whole taste testin' thing that was goin' on.  My brother Rushton went straight for the salmon variety.  I would have liked to have tried the salmon one too but Rushy was hoggin' the bowl and not givin' the rest of us a chance to test it out.

Turns out, both varieties passed the taste test with flying colours 'cause this mornin', the bowls were completely empty.  COMPLETELY EMPTY, I say.  Yup, overnight we cats ate every single piece and let me tell you, they were delish!

I did some checkin' on the Harringtons - The Natural Choice website and found some stuff out. Firstly, their foods are suitable for all cats, eight weeks and older.  That means that all ten of us at my house are old enough.  Good news. 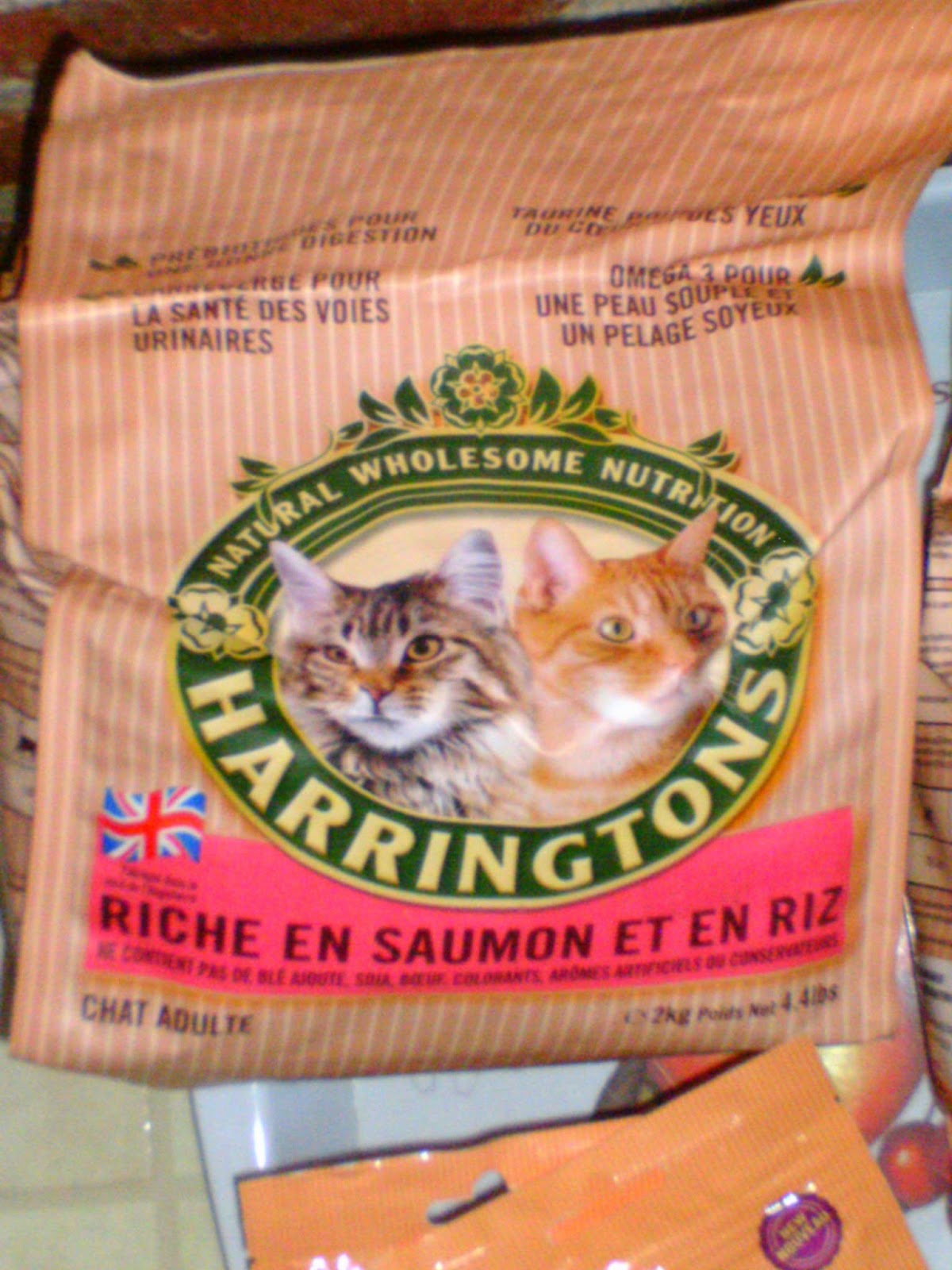 Secondly, I discovered that both the Chicken with Rice and the Salmon with Rice varieties have some super good ingredients.  They contain REAL chicken and salmon and REAL rice and some extra-special things to promote good health.  Probiotics for healthy digestion, taurine for a healthy heart and eyes, cranberry for urinary tract health and omega 3 for supple skin and a glossy coat.  There were also some vitamins, a good supply of calcium and protein levels at almost thirty percent.  EXCELLENT.  Yup, lots and lots of good stuff to keep us kitties healthy.

Finally, there are some things these foods do not contain.  Both formulae are completely free from dairy, soya, beef, artificial colours, artificial flavours and preservatives.  Oh, and there is no added wheat, either.  Apparently, these ingredients are things that might be unhealthy for kitties to eat so you'll find none of 'em in Harringtons cat food.

Now let's see...  Harringtons - The Natural Choice cat food seems to have some pretty high standards, nutritionally and as I said before, it passed the taste test with flying colours.  What about the final test?  The final test would be price and availability. 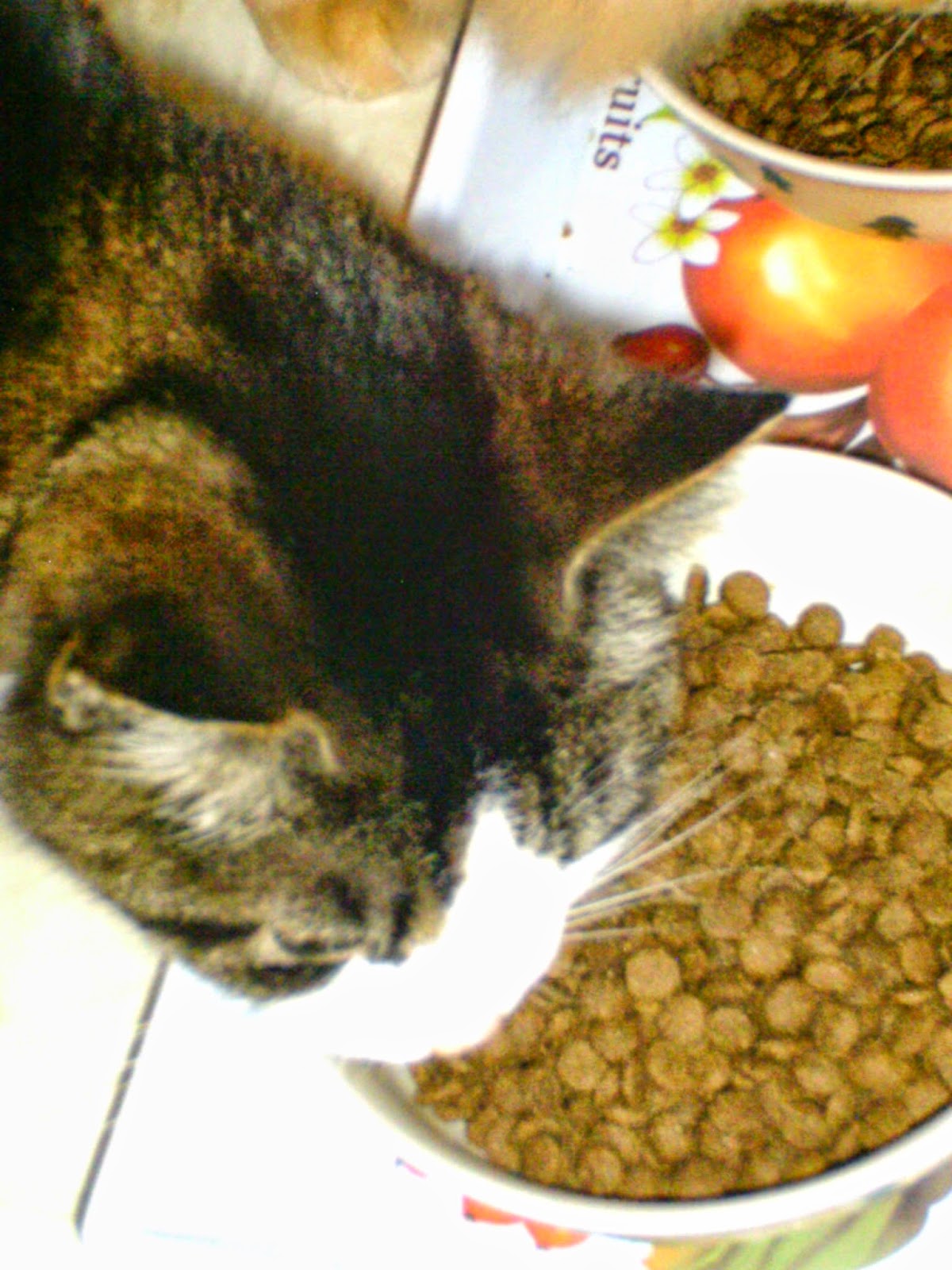 I did some checkin' and found that here in Canada, the price of the 2kg sized bags of Chicken with Rice and Salmon with Rice is very reasonable.  It's right in the same range as what the peeps have been gettin' at the grocery store.

Availability, however, is a bit of an issue.  I could only find one Canadian supplier of the food which was Walmart.  We have a Walmart locally so I'll send the peep to check out whether or not they carry it in their store.  The peep has been avoidin' goin' to stores for the past couple of weeks 'cause of the lack of hot water issue in our house but now that that has been resolved, she will be able to run errands for me once more.  But the food was definitely available to purchase on-line so it IS available here in Canada.  Unfortunately, I could not find those delicious liver or hairball formula treats anywhere but I shall keep on looking 'cause, like I said, they were delish!

On the other paw, Harringtons - The Natural Choice is available at lots of stores in the UK, a couple of which I even recognised.  Yup, I knew the name Sainsbury's 'cause I think it was once mentioned on Are You Being Served and I'm sure there's a Tescos on Coronation Street.  Clearly, we cats learn lots of stuff from watchin' British television.  But I digress... 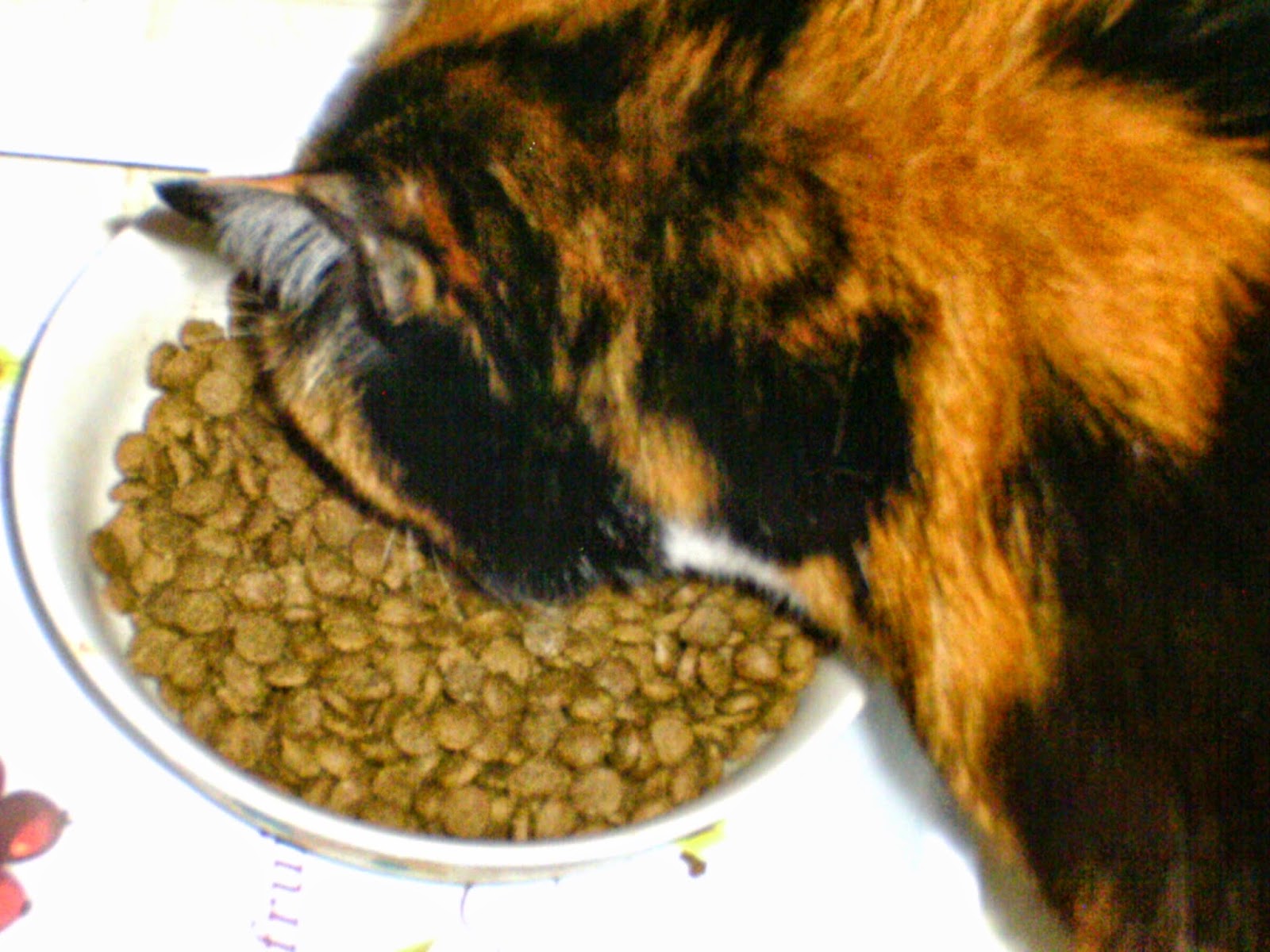 But my digression has reminded me of somethin' really important.  Harringtons - The Natural Choice cat foods are manufactured in the UK.  My peeps try very hard to buy Canadian whenever possible but really, buyin' from the UK is the next best thing 'cause as a Canadian kitty, I have a British heritage.  We share the same Queen!  And you know what they say about cats bein' able to look at queens....


***  And now to make everythin' all legal and whatnot.  I was not paid in any way, shape or form by Harringtons - The Natural Choice Pet Foods to do this product review.  I did receive two, two kilogram bags of food along with four bags of treats but absolutely no monetary payment was made. Neither the free food, my prior friendship with Basil nor the complementary box in which the food was shipped influenced my opinions of the products.  My opinions are my own, are not for sale and cannot be influenced.   MOUSES!

Posted by Seville at Nerissa's Life at 13:03