a request for assistance 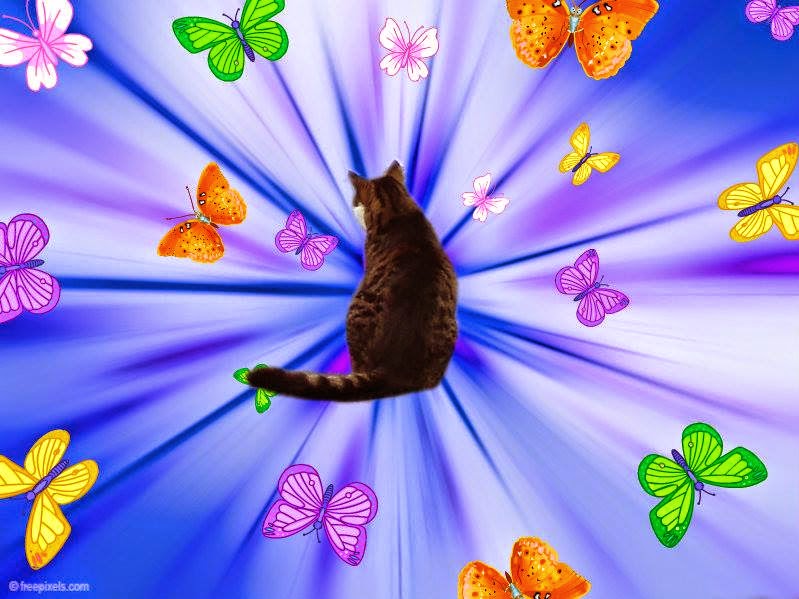 Nissy raced into the kitchen.  The toaster transporter was dinging incessantly and he knew there must be an urgent message awaiting him. Skidding to a halt and hopping up onto the counter, he peered into the toaster.

"Yeah, would you mind answering that toaster?" Seville asked.  "The dinging is annoying.  It's disturbing my nap."

Nissy glanced over his shoulder to see his marmalade brother curled up on a kitchen chair.  Obviously, Seville had not considered to get up himself to see what message was coming through. Nissy watched as his brother let out a giant yawn, closed his eyes once more and fell back asleep.

Scattered around the toaster were several hard-boiled eggs, each painted with the letters S, O and S.  Another ding coughed up a couple more.  Clearly, someone was in trouble and needing his help.

A loud explosion in the back yard startled Seville, awakening him from his nap so violently that it caused him to jump straight up into the air and hit his head on the ceiling.  "For crying out loud!" he cried.

Nissy looked out the kitchen window.  The sky had darkened and the air had become hazy.  A pinprick of light appeared out of nowhere and from it, time waves began to emanate.  This anomaly was going to require immediate investigation.

Venturing outside, Nissy cautiously approached the disturbance in the space-time continuum. "What the mouses is that?" he asked Seville who had followed him outside and was now sitting beside him.  "MOUSES!  I've never seen anything like it.  Have you?"

The two cats watched as hundreds of butterflies began to fly out of the vortex.  Never before had a vortex created a butterfly effect.  Whoever had opened it was certainly not using egg beater-whisk time travelling-teleportation technology.  Some other kind of technology was at work here.

Mesmerised, the cats sat there, watching the butterflies flit this way and that.  Seville swatted a couple with a paw but they escaped, unscathed.  Moments later, there was a loud thud and out of the vortex rolled a giant painted egg.  The egg righted itself and out popped two arms.  As it came to life, a face appeared.

"MOUSES!" cried the cats in unison. 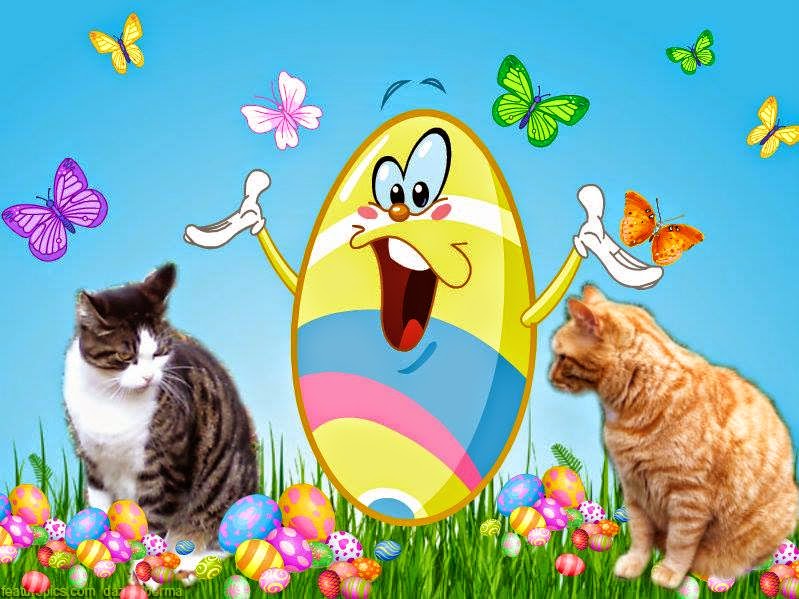 "Hello there.  Egg Sackly is the name," and the giant egg reached toward Nissy to shake his paw.  "You must be Nerissa the Cat.  Very pleased to meet you."  Turning to Seville he said, "and I assume you are the brother, Seville?"

The cats stared at Mr. Sackly in disbelief.

"You're probably wondering about my unexpected visit.  We've been sending messages to you all morning but your toaster transporter appears to be malfunctioning."

"Those eggs were from you?" Nissy asked.

"Ah, so you did get my messages.  Never thought to reply?" and the egg sighed loudly.

"Sorry 'bout that," explained Nissy.  "Only got the messages a few minutes ago and I didn't know from whom they were coming.  Please tell me what's going on and how I can help."

"We're facing a major catastrophe over at Easter Bunny Headquarters.  If the matter isn't resolved within the next few days, Easter morning egg deliveries will be in jeopardy.  In fact, they already are. This matter needs to be attended to urgently and the top bun felt you were the only cats for the job."

"You mean that the Easter Bunny himself has requested our assistance?" Seville asked, incredulously.

"He most certainly has although," and the egg cleared his throat, "he really requested the assistance of Nerissa the Cat but is aware that the marmalade side kick is part of the bargain."

"SIDE KICK!  Of all the nerve," sputtered Seville.  "I'll show you a kick," and he raised a hind leg. Thinking this might be going a little far, Seville lowered his leg before peering under Egg Sackly. "Ummm...  by the way, how come you don't have any legs?" he asked the egg.

"I'm an egg.  Eggs don't have legs," he answered.  Turning back to Nerissa the egg instructed, "You'll need to follow me back through the vortex.  Prepare to duck and roll."

Nissy peered into the vortex, narrowing his eyes.  "Yeah, I don't think we're gonna do the ol' ducking and rolling bit.  We have our own mode of transport.  SIVVERS," and he turned to his brother, "PREPARE THE TELEPORTATION DEVICE." 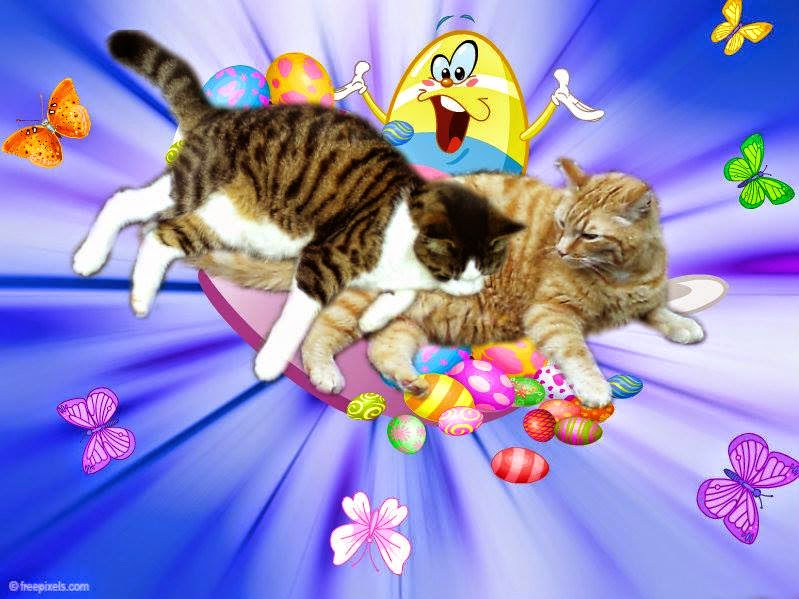 Moments later, the two cats and Mr. Egg Sackly were hurtling through space and time, heading towards Easter Bunny Headquarters.

"Can't this flying frying pan contraption go any faster," cried the egg?  "Time is of the essence.  Easter is at stake!"

"Faster?  You want to go faster?" asked Seville.  "I have the whisks whisking full blast.  We're travelling forward in space but backwards in time.  We'll arrive before you even left.  Gosh," he turned to Nerissa and hissed, "Eggs sure are impatient."

"And I think this one is a little soft in the centre," Nissy muttered under his breath.  "He seems to have forgotten just who is doin' whom the favours around here.  On the other paw, he might be feelin' a little nervous about bein' in...  well...  you know...  'Bout bein' in a fryin' pan, if you know what I mean.  I'm hopin' we'll get some better Intel once we can speak to an actual bunny."

Landing gently in a grassy field, the cats and egg climbed out of the frying pan teleportation device. Nissy had to admit that Egg Sackly was looking mightily relieved to be on solid ground, once more.

Nerissa looked around.  There were painted eggs scattered everywhere.  Scattered around like wild flowers growing amidst the grass.  Multitudes of butterflies danced in the air and Seville took another swipe at one.  It flew off, only to replaced by several others.   Off in the distance, loomed an ancient castle.  Nissy wondered if that castle was the Easter Bunny's Headquarters.

A small white rabbit approached them, hopping through the painted eggs.  "Nerissa?  Nerissa the Cat?  Thank goodness you are here!" the bunny exclaimed.

"Goodness no!  But I do work here at Bunny Headquarters.  We have a real problem on our paws," stated the rabbit.  "Our only key to the chocolate vault has been either lost or stolen and without it, we can't access the goodies needed for Easter morning deliveries.  Millions of children around the world are eagerly awaiting Easter morning and without that key, we'll let them all down."

"But there are eggs all over the place," interrupted Seville, batting at one between his two front paws. "They're everywhere.  Just look at them all." 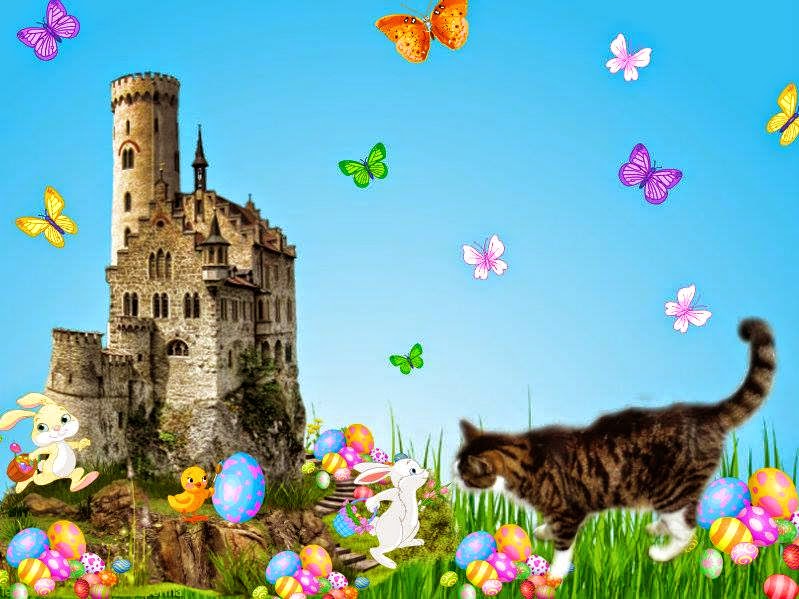 "Did you say, billion?" sputtered Seville.

"Did you say, approximately?" asked Nerissa.

"The point is," continued the rabbit, "we need access to that vault.  Nerissa, your reputation precedes you.  Only you and your brother are capable of returning that key to us.  Are you willing to accept this assignment?

Smiling broadly, Nerissa was just about to answer with a resounding yes when he was distracted by the sound of eggs cracking as Seville managed to smash two of them together.

"What?" asked Seville looking up, innocently.  "And by the way, have you ever thought of filling these things with nip?"


Be sure to return on Sunday April 20th for part two of the cats' Easter adventure.

Posted by Seville at Nerissa's Life at 12:51