should have used a whisk 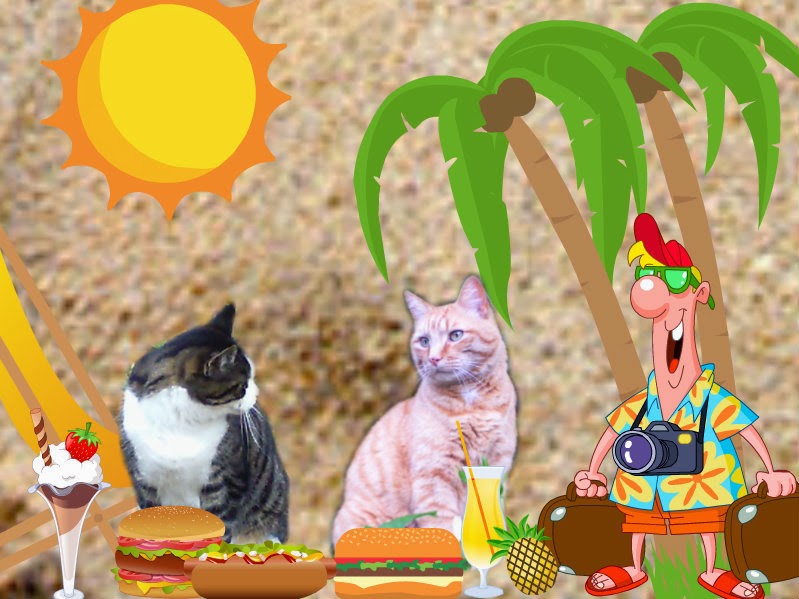 Previously on Nerissa's Life...  Nissy returned to filling out the forms. "One down, nine hundred and ninety-nine to go," he muttered. "MOUSES!"

Nissy threw down his pen triumphantly and cried, "Done! Gosh that was a lot of forms but we did it, Seville. We filled 'em all out.  Now we can go meet those little control freaks next door."

"Doubt they like bein' called control freaks," Seville told his brother.  "I know I sure wouldn't."

"Well I'm just repeatin' what Weatherby called 'em and besides, their job is to control the weather. The word control is bound to come up.  Come on...  let's go find Weatherby and have him introduce us to the freaks next door."

Nerissa and Seville looked high and low for Weatherby.  They looked under desks and up in cupboards but couldn't find a trace of the man.  Nissy even climbed a couple of trees growing in the Worldwide Weather Offices, just in case Weatherby was hiding in one of them but there was no sign of the elusive man, anywhere.

"Come on Sivvers," decided Nissy, "we'll go next door on our own.  We don't need that Weatherby character to show us the way.  This is just typical governmental bureaucracy.  When you need someone to help you, they're never around."

The two cats made their way down the hall, stopping before large glass double doors.  Printed on the glass was, WWO CONTROL.  "This must be the place," Nissy thought aloud and as he stepped closer, the doors swung open.

They were almost knocked over by a blast of hot air, emanating from the office and the snow just outside the office doors began to melt.  "ALOHA!" cried a man from inside.  He was dressed in clothes one would wear to a beach and Nissy thought for sure he must be heading off on vacation. "Come on in!" and the cats were invited to join the man for drinks and a little something to eat.

Nissy looked longingly at the burgers before him.  "You have snacks?  Those aren't veggie burgers, are they?" he asked suspiciously.

"Mmmm...  no...  they're deli...  delicious," Seville informed his brother between bites.  "Taste different from regular burgers though.  Mmmm...  Think they might be made with pork or somethin'," and he wiped some ketchup from his chin.  "Have some, Niss.  You'll love them."

"Er-hrm...  first things first.  I'm Nerissa and this is my brother, Seville.  We're here about the ridiculously unpredictable weather in Nova Scotia and my inability to build a snowcat.  And your name is...?"

"My, aren't you a serious little kitty.  Name is Torin Weatherby.  You can call me Tori.  Everyone does.  I'm the Chief Weather Controlling Officer.  That's me," he preened, "CWCO Tori Weatherby." 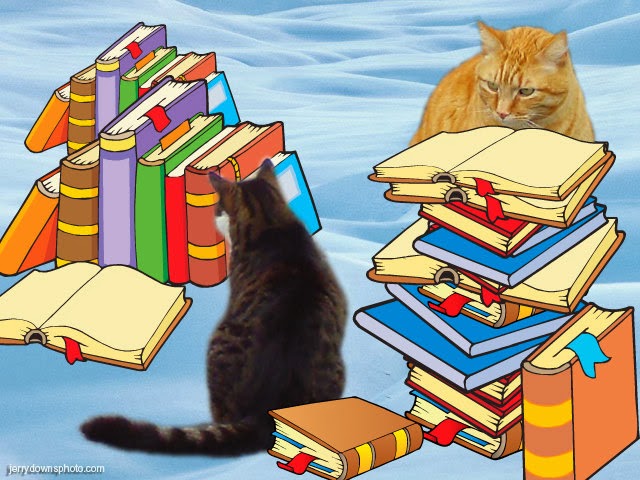 "Hmmm...  isn't Tori a girls' name," Nissy asked.  "Uhhh...  actually, never mind," he decided, thinking about his own name and the fact that he was a mancat.  "You related to William Weatherby next door?"


"We're brothers," and Tori slurped down the rest of his drink.  "So you think you need some snow in Nova Scotia this winter and you came here to ask for it? You came here?  Why here?"

"These are the Worldwide Weather Offices, Forecasting and Control, Canadian Division.  Where else would we go?"

"But...  uh..."  Nissy paused.  "Exactly what are your qualifications for this position, Weatherby?"

Torin Weatherby gave the cats a cold, icy stare.  Icy enough to freeze all of Canada in once glance. "I told you, William is my brother.  I have friends in high places, you know.  You might want to watch your step."  Then he suddenly smiled and said, "Look, we're all friends here.  No reason for us to argue.  Truth is, I'm on my way to have some fun in the sun.  I seriously need a vacation. Christmas holidays were so long ago."

"But that was only a month..." Nissy began.  "Never mind.  You go on your holiday and tell me who will be left in charge while you're away."

"No one really," yawned Tori.  "The weather scientists, I suppose.  I'm off.  See you in March!" and with that, Torin Weatherby disappeared out the door.

The two cats stared at one another, not knowing how to respond.  Seville grabbed another burger from the BBQ while Nissy wandered over to a corner of the office seemingly unaffected by the heat suffocating the rest of the room.  He began to inspect the piles upon piles of textbooks and manuals lying before him.  "Hey Sivvers!  These are all books on controlling the weather.  With that Tori character gone, you and I can figure out how to direct some proper winter weather to Nova Scotia." 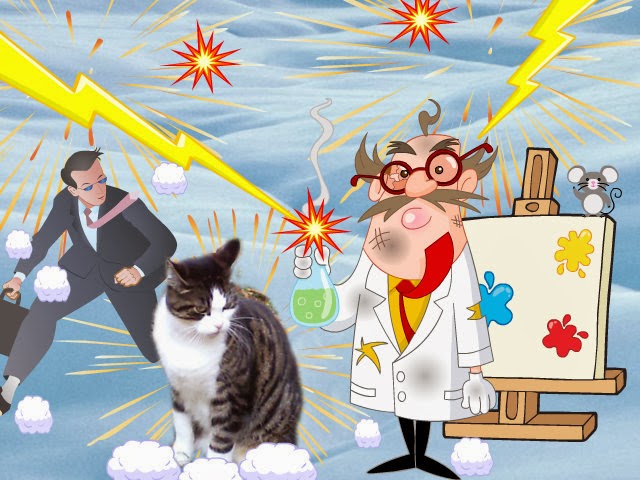 Nerissa and Seville spent the next few hours pouring over the various manuals and taking a break every now and then to snack on a burger or two.  The weather controlling business didn't appear to be all that difficult.  All they needed to do was follow the instructions.  Nissy couldn't understand why Torin Weatherby had been unable to provide Nova Scotia with winter weather, himself.

"And who do we have here?" asked a man wearing a white lab coat who had suddenly appeared before them.  "Cats trying to control the weather?  Yes?"

"Are you one of the scientists?" asked Nissy.  "So pleased to meet you," and he extended a paw to shake the man's hand.  "I'm Nerissa the Cat and this is my brother Seville."

"Ah yes...  I have heard about you.  Weatherby mentioned you were here."

Nissy didn't bother to ask which Weatherby had mentioned their arrival.  "Anywho...  I think I've figured it out.  Figured out how to make it snow in Nova Scotia and skip the rain until...  well... spring."

"Well, well, well...  aren't you a clever kitty," said the man whose name tag read, Professor Weatherby.  "I do know what I'm doing, you know.  There were other scientists before me who thought they understood the weather but...  well...  we got rid of them.  They kept finding the wrong results."

"Finding the wrong..." began Nissy.  "Never mind.  Let's just get this show on the road, shall we? Now Professor Weatherby, if you take this chemical and then add these two and then some of this red stuff.  What is this anyway?  Is this tape?  Never mind.  Then we need to heat it up.  You have any Bunsen Burners around?"

"No, we don't use those," explained Weatherby.  "Due to government cutbacks, we just burn these when heat is necessary," and he tossed several crumpled up papers into what looked like another BBQ.  Nissy peered at the papers before Weatherby tossed in a lit match.  They looked familiar. Sure enough, they were some of the many forms he and Seville had filled out earlier.  Nice to know they were being put to good use.

Professor Weatherby followed Nerissa's instructions to the letter and before long, sparks started to fly.  Not from the BBQ but rather, from space and time itself.  There was a bolt of lightening and then another, followed by more sparks.  The glass doors to the office violently flew open and the cold air from the hall filled the entire room.  The sandy area where Tori Weatherby had entertained them with burgers and fancy drinks a few hours earlier, frosted over and snow began to fall from newly formed storm clouds.  Something was definitely working...  or not.  Nissy wasn't quite sure.

"Take that!" a familiar voice cried and the two MPs the cats had seen earlier came running through the offices, still throwing snowballs at one another.  Nissy surmised this must be part of their daily ritual.  "This will teach you for voting against my bill!" 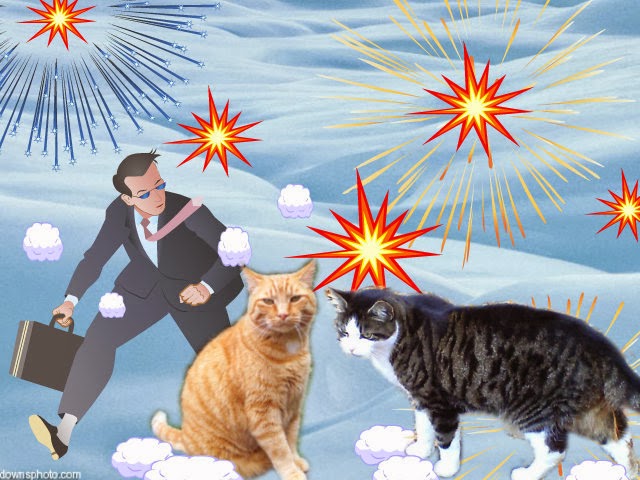 Suddenly there was a bright flash of light and then complete darkness. When the emergency lights came on, Professor Weatherby was nowhere to be seen.  He had vanished into thin air. The cats were alone in an icy cold, snow-filled office.  Little flashes of light began to appear before them again. One of the MPs ran past.  A few snowballs flew by.

"Hmmm...  Sivvers?  I think that uh... um...  that you and I should teleport on home now.  Our work here appears to be done and I have a sneakin' suspicion I screwed up the space time continuum with that flask of stuff I had Ol' Professor Weatherby brew up.  Didn't like the way he was sloshin' it about and stuff.  He should have used a whisk.  We should probably head on back while we still can. Let's just hope there's some Nova Scotian snow for us when we arrive home."

"I know!  We can build a couple of snowcats and then, after that, we'll build a snow Weatherby!  That should be fun, huh?  Come on...  let's get out of here while the goin' is still good," and the cats quickly teleported out of Ottawa and back to Nova Scotia, leaving the mayhem they had caused behind them.