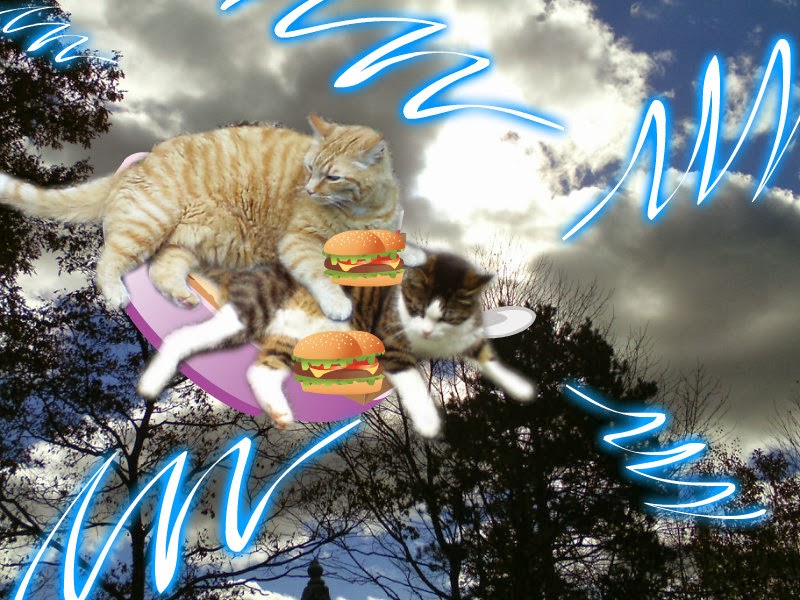 "Not again.  MOUSES!" Nissy cried as he turned away from the window and stomped across the kitchen floor.  "I'm gonna have to do somethin' about that weatherman.  HE'S DOIN' IT ALL WRONG!"

"What's up, Nissy?" asked Seville. "What has got your fur all ruffled this time?"

"Have you been outside?  I was gonna go out and play in the snow but just look at it out there!  The snow is all meltin' and it's startin' to rain again.  I was all ready for a little fun time.  Fun in the sun...  and the snow.  A winter wonderland kind of fun.  Thought I might make a snowcat or somethin'.  Can't make a snowcat out of rain," Nissy grumbled.

Seville glanced outside.  "Think spring might be on its way.  That means primroses and daffodils and sunpuddles.  All good stuff, Niss."

Nissy let out a loud sigh of exasperation.  "It's only January, Seville.  We still have all of February and most of March to go before spring.  Just look at the calendar," and he pointed up at the wall. "See?  Another six weeks of winter at least."

"Seville," and Nerissa stretched out a paw to touch his marmalade brother on the shoulder, "there's only one thing for it.  You and I are gonna head on over to the Worldwide Weather Offices and have a little chat with whomever is in charge over there.  Those weather peeps have got some explainin' to do, for sure.  Now, where did I put that card..."  Nissy started rifling through the various business cards stuck to the refrigerator with magnets.

"Got it!" Nissy cried exuberantly.  "Worldwide Weather Offices, Forecasting and Control, Canadian Division.  I just knew this would come in handy sometime.  Come on Sivvers, you and I are goin' to Ottawa.  SIVVERS!  Prepare the teleportation device.  Here are the necessary co-ordinates," and he thrust the business card into Seville's paw.

"Okay...  if you insist.  Nissy, grab an egg beater and hop in the pan and this time," suggested Seville, "let's bring along some snacks."

"Good thinkin'," and Nissy grabbed a couple of burgers that happened to have been left out on the counter, hoping against all hope, they weren't veggie burgers meant for the peeps' lunches. Remembering the time he accidentally bit into a veggie burger by mistake, sent a shiver down his spine and being a cat, Nissy had a very long spine to shiver.

Within seconds the two cats were hovering over Parliament Hill.  Seville made a sharp turn, narrowly avoiding a collision with a Canadian flag.  They landed softly in a snowdrift, just outside a small door which appeared to lead into an obsolete area of one of the Parliament Buildings.

Nissy stood up, brushing some snow off himself and giving his tail a shake.  He tossed the disgusting veggie burger over his shoulder and quietly vowed to never again steal a burger from either of his peeps.  He looked around at the white landscape.  "I see they have plenty of snow here," he muttered to himself.

Approaching the door before him, Nissy paused before turning the knob and pushing it open.  A gust of cold air hit him in the face, causing him to wince and turn away just in time to see a snowball soar past his head and hit Seville in the face.  "This is the place," Nissy proclaimed.  "I've heard about there bein' snow and whatnot inside the Worldwide Weather Offices.  Weird stuff but you know... Canadian weather is known to be weird."

The two cats entered the room which appeared far larger on the inside than they had expected it to be.  There were trees growing inside the offices.  Growing right out of the ground.  No plant pots or anything.  And the floor was covered in a layer of snow.  Had Nissy not known better, he would have sworn that they were outside.  He gazed up at the ceiling which had to be at least twenty-five feet high.  Large snowflakes were falling from above.  Catching one on his tongue, it melted.  "Yup, that's snow alright," he decided.  Floating above their heads, were clouds.  Some were white and fluffy while others were dark and ominous looking.  Nissy wondered if a storm might be brewing.

Movement caught Nissy's eye and he looked over at an open door just in time to see a man running past it and down the hall.  "Take that!" cried a second man, throwing a particularly large snowball at the first. 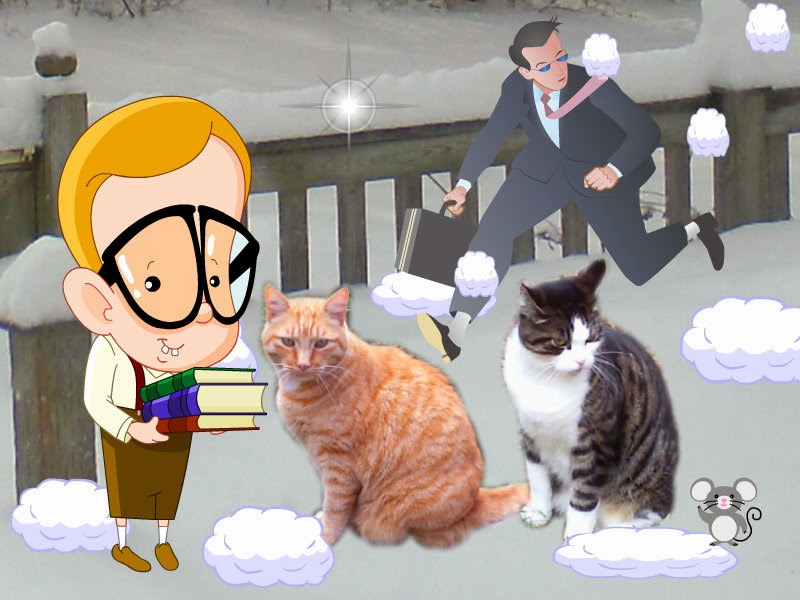 Seville looked at his brother, questioningly.  "Uhhh...  Niss...  Were those two men Senators?" he asked.

"No...  No...  No, I'm pretty sure they were both MPs.  One of 'em might even be a Cabinet Minister or somethin'.  He looks kind of familiar.  MOUSES!  No wonder our country has got political problems."

It wasn't long before a little man carrying a stack of books appeared before the cats.  "And how may I help you?" he asked.  "Don't see many cats around here these days.  There used to be lots of cats in these here parts but not so many now.  Nice to meet you.  My name is Weatherby.  William Weatherby at your service," and he extended a hand to shake the cats' paws.

"Hey there.  I'm Nerissa and this is my brother, Seville.  We're here about the weather."

"Well of course!" exclaimed Weatherby.  "Why else would you come to the Worldwide Weather Offices, Forecasting and Control, Canadian Division?"

Nissy took Weatherby aside and explained to him the issues he was facing regarding the weather and his inability to build a snowcat.

"Tsk, tsk, tsk...  You experienced sub-zero temperatures, icy conditions, a blizzard, clear weather, snow, rain, snow, more rain and more snow all within a week?  My, my, my...   That is strange. Very strange, indeed.  Even for Canada," Weatherby said to Nissy.   "And this was all just last week?  In January?  Hmmm...."

"It was and the day after the blizzard, the peep dug out paths for me in the snow.  They were like castle walls.  Over a foot high, they were," Nissy explained to Weatherby.  "Such fun sneaking around in those paths but then the very next day, the rain came along and turned my castle walls into ruins.  Not so great, if you know what I mean."

"May I ask if this odd weather had been forecast?" asked Weatherby.

Seville stepped up beside Nerissa, ducking another flying snowball thrown by one of the two MPs running past the open door again, this time in the opposite direction.  "Yes Mr. Weatherby, the weird weather was forecast.  I heard our peeps talking about the odd weather after listening to it on the news."

"Well then," considered Weatherby, "clearly this is a problem with control and not forecasting. Controlling the weather is governed by a sub-committee.  It's a Parliamentary sub-committee of a subcommittee of one of the many sub-committees.  Their offices are just next door but before you can even speak to any of those little control freaks, you'll need to fill out a few forms."  Weatherby snapped his fingers and two young assistants appeared, each pushing a cart through the snow on the floor.  The carts were heavily laden with five foot high stacks of forms.  Weatherby introduced the cats to Jack and Jill Frost, his two office assistants.  "Start filling out these forms," he instructed the cats, "while I go get you the rest of them.   And some tape.  After you fill out all the forms, we'll stick them together with some red tape."

Nissy and Seville looked up at the stacks of forms.  They looked way, way up.  "We have to fill out all of these forms?" they asked in unison.

"Of course," answered Weatherby.  "What did you expect?  This is Ottawa."

At that moment, one of the dark, ominous-looking clouds that Nissy had noticed when they had first entered the Worldwide Weather Offices, let loose with a heavy downpour of rain.

"MOUSES!" Nissy cried and several dozen mice appeared, dragging large umbrellas for the cats to use.  Nissy and Seville each popped open an umbrella and started filling out the dozens upon dozens of forms that lay before them. 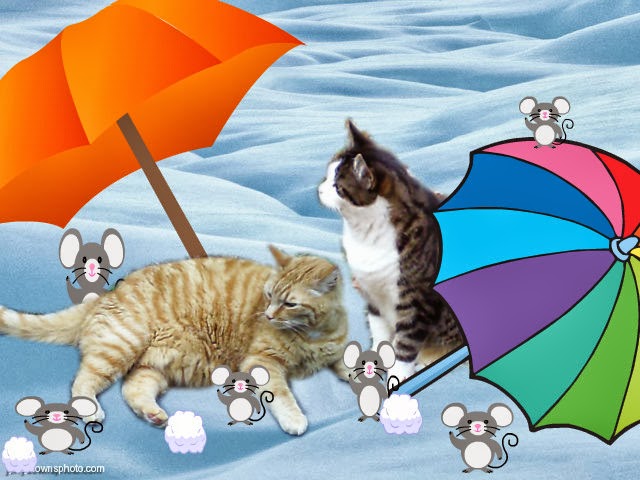 "I'll go get you the rest," Weatherby told them.  "Be back in a jiff!" and with that, he disappeared into the hall where, the snow appeared to still be falling and even more heavily than before.

Weatherby slipped on some ice.  The two MPs were still running back and forth through the halls, throwing snowballs and tripped over Weatherby. A snowball rolled into the room, stopping by Nerissa's right-hind paw. Nissy looked down at the snowball and then over at the men and glared.  All three jumped up before scurrying away.

Nissy returned to filling out the forms.  One down, nine hundred and ninety-nine to go," he muttered. "MOUSES!"


Be sure to return on Sunday February 2nd, for part two of the cats' adventure.  Stay tuned...

Posted by Seville at Nerissa's Life at 11:48