But of course, it's all the peep's fault.

Today's post was supposed to be a post in celebration of several wonderful awards with which my pals have honoured me.  After officially acceptin' these awards, I was gonna honour some more of my pals by passing along those very same awards but then some stuff came up that was of a somewhat urgent nature.  Then the peep offered to get me the links for everything and then... then...  then the peep never produced the necessary links. She said the post was gettin' a little long-winded.  LONG-WINDED IS WHAT I DO BEST!  Does my peep not understand my writing style?  MOUSES!

So long story short (as if), I'm gonna be doin' this post in two parts although the second part may not follow for a week or two.  Again I say, MOUSES!

I'm gonna start with some beggin'.  That's right, I'm coming to you on bended knee, beggin' for stuff. And remember, one of my knees was bionicized after my little accident so I'm beggin', bionic style!

Did you know that I was nominated in the Canadian Blog Awards?  It's true!  I'm super happy about this but it is a voting competition and therefore, I must beg for votes.  It's pretty easy to do though. The voting part is easy.  Begging, not so much.

Anywho...  if you click right here on Canadian Blog Awards, you'll be whisked off to Election Headquarters where you can vote.  You can vote once in each of the various polls, I do believe. Votin' is open worldwide.  Although it's the Canadian Blog Awards, you do NOT have to be Canadian to vote.  Pretty neat, huh?  Yup, it sure is.  Almost forgot...  votin' ends on February 22nd so you'll want to get your votes in before then.

I've been nominated in three categories...  BEST PET BLOG, BEST FUNNY BLOG and BEST BLOG POST.  Now here is where it gets kind of complicated but just a tad complicated, really.  Apparently, I have four of the five nominations for Best Blog Post.  This is a bit of a problem 'cause I'm in real danger of splitting my vote and losing to that other cat.  Actually, I think he or she is a peep and not cat.

But anywho...  because of this vote splittin' - which should not be confused with vole spittin' - thing, I'm askin' that my pals who wish to support me, concentrate their votes on just two of the four posts.  "A wild goose chase" is super funny, I think, and "because neglect STILL isn't workin'!" is far more serious but a really important issue.  With votes bein' concentrated on those two nominations for Best Blog Post, my odds should improve.

But the begging isn't over.  I wish to beg a little more.

Nominations for the BlogPaws Nose-to-Nose Awards are currently open but will close on February 12th.  I would so love to be a finalist again this year.  Last year, I even won an award.  Do I dare hope to do so again?  Well, not if not nominated and that, my friends, brings me to the additional begging part.

I'm hopin' that some of my readers will consider nominating Nerissa's Life in a category or two.  In order to place a nomination, you'll need to teleport on over to the nomination page which can be done easily enough by clicking right here on BlogPaws.  See!  Easy peasy as they say.  But there is some information you'll need in order to make the nominations.  I shall now endeavour to provide you with such. 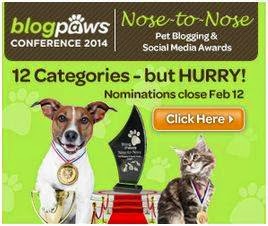 You'll need Peep #1's name, Jennifer Niemi.  You're also gonna need a contact e-mail.  We'll use her handy-dandy Facebook e-mail which is  jennifer.niemi.10 (at) facebook (dot) com  if that's okay with everyone.

I'm really hopin' to be nominated for BEST CAT BLOG.  For that, all you need is the aforementioned information along with the blog name, Nerissa's Life and its URL, www.NerissasLife.com which, of course, you already knew.

Then there's the BEST HUMOUR BLOG category.  I looked through all my posts and came up the following, any of which - I think - could make the cut for a nomination.

But you might have a different favourite you'd like to nominate and, of course, I would love for you to do that.

And what about the BEST BLOG POST category?  Again, I picked out four of my favourites but you might very well prefer another.  Perhaps even one of the ones mentioned for Best Humour?

And last but not least, the BEST PET BLOG PHOTO category.  Normally I wouldn't have a picture on paw that was suitable for such a prestigious nomination but as luck would have it, this year proves to be an exception.  I might just have one that can squeak by.  Do you see that picture way up at the top of this blog post?  The one with me in the goggles I wore for my laser treatments after havin' my knee bionicized?  Well, I'd love to enter that one.  Yes indeedy, I would.

To nominate a picture, one needs a direct link to it that picture for the judges to use.  That link would be...

Whew! it's a long one.  Kind of like my blog posts.

And once more, here I am on bended knee...  WON'T YOU PLEASE NOMINATE ME? 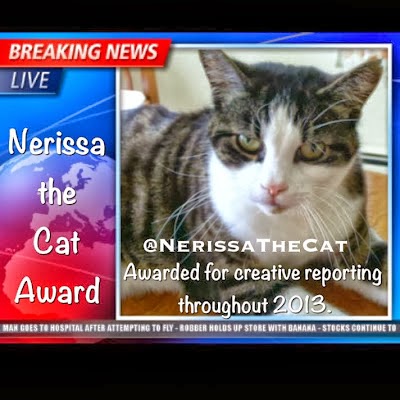 Now for the best stuff of all!  My BFF Herman, from the amazin' blog It's a Wonderpurr Life, created a brand-spankin' new award in my honour.  Receivin' this was such a proud moment for me, my friends.  Words cannot do it justice.  Never before have I had an award created in my honour.  Apparently, Herman is gonna award one anipal the Nerissa the Cat Award (gotta LOVE the name) at the end of every year but I am the very first recipient ever.  Probably 'cause my name is Nerissa and all.

WOW!  What an amazin' award and a great honour, for sure. Thank you my friend.  I am humbled beyond words.  Yeah, yeah...  I know...  this blog post is running in the 'longer than ever before' category because of all the words but still, I am truly honoured.  Just perhaps not entirely wordless.  THANK YOU HERMAN.

One last thing.  My gift to all of you via Facebook.  If you haven't already heard, Facebook gave everyone with timelines their own personal movie to celebrate Facebook turnin' ten.  Well, I don't have a timeline 'cause the peep cheaped out on me and just got me a fan page but she has a timeline and so she got a movie.  Turns out, the powers-that-be over on Facebook recognized that I was far better lookin' than the peep and far, far more photogenic.  In true form I, Nerissa the Cat, photobombed the peep's movie.  You can see my starrin' movie role here in MY very own facebook movie.  Just click here on Nerissa's Facebook Movie and you'll be teleported to the movie theatre where my movie is currently playin'.  GOTTA LOVE IT!

So that's all for today, folks.  My beggin' is finally over.  Now, if you'll excuse me, I'm gonna head on over to BlogPaws and make some nominations of my own.  I've got tonnes of pals who are truly deservin' in a whole whack of those categories so I've gotta start nominatin' now before nominations close on the twelfth.  Hmmm...  now where did I put that link....   MOUSES!

Posted by Seville at Nerissa's Life at 12:08