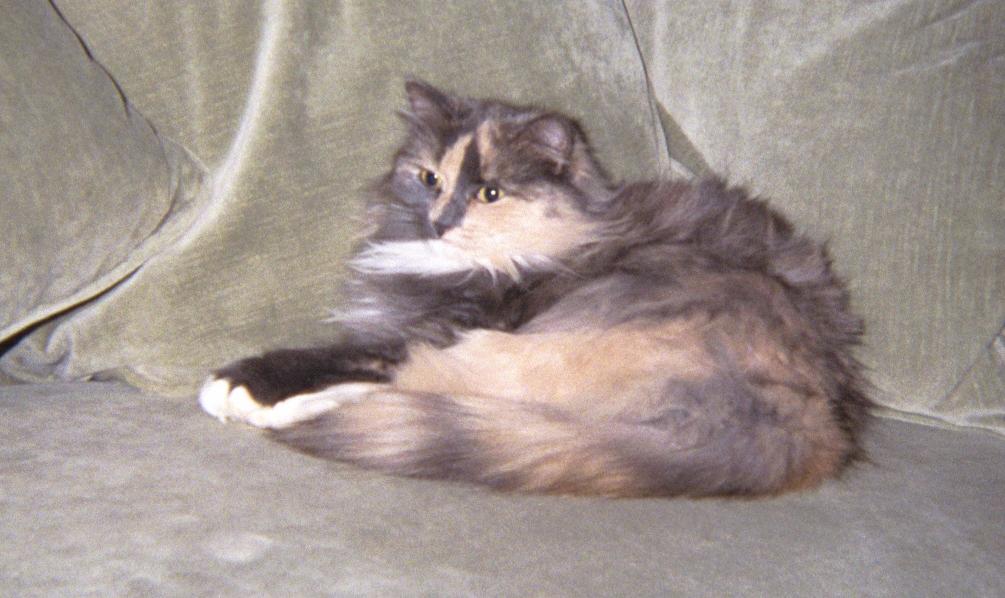 Looks like my sister, Tess, is goin' in for a dental this week.  Yup, it's true.  She has a sore tooth.

The peeps realised Tess had a sore tooth when she started growlin' at her food one day.  Now, growlin' for Tess is nothing new.  It's not news at all.  News, is by definition, new.  I should know 'cause you know... I, myself, am a bit of an investigative reporter and whatnot.  I understand what makes the news, news.

Anywho...  Tess' growling was nothin' new so it couldn't possibly be considered news.  Tess growls at the peeps.  She growls at the rest of us cats.  She even growls at the weather!  But she had never growled at her food before.  That's how the peeps figured out somethin' was wrong.

So last Tuesday night, Tess was shoved into a carrier and taken to see the doctor.  That's right... shoved.  Believe me, she didn't just waltz in when the carrier door was opened.  No, she wormed and she squirmed and eventually, Peep #2 held the carrier on its end while the first peep held Tess' back paws together with one hand, her front paws together with the other hand and directed Tess into the carrier, tail-end first.  I was watching from a safe distance and if I didn't know better, I would have thought I was watchin' an episode of Cops or somethin'.  You know, when the officer puts his paw on the suspect's head when gettin' him into the police car 'cause he's under arrest.  Of course, on Cops, the suspects don't usually growl.

Tess was growlin' up a storm in the kitchen while bein' shoved into that carrier.  I am told, however, that she didn't make a single peep on the way to the doctors' office or even in the waiting room while waitin' for the doctor.  Very unusual, indeed.  The peep checked a couple of times to make sure she was still breathin' in there.  She was.  I think, perhaps, she was plotting her revenge.

When Tess and the peeps finally got into the examination room, Tess had to be first examined by the nurse.  Usual stuff.  Temperature takin' and whatnot.  Oh, the indignity of the temperature taking! Why-oh-why-oh-why the nurses can't take our temperatures by lookin' in our ears or somethin' is beyond me.  Anywho...  the deed was done.  Tess' temperature was normal. 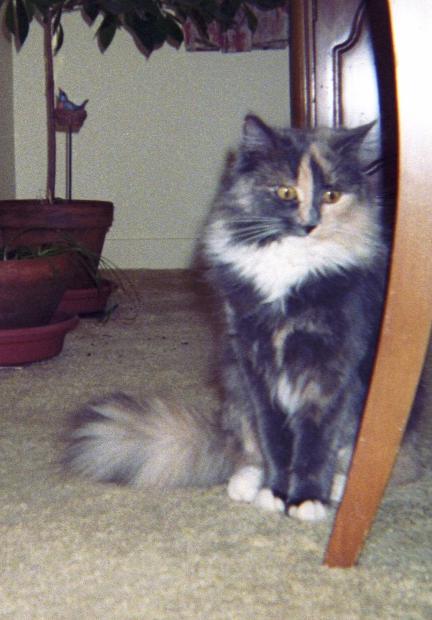 But then the nurse wanted to take a look in Tess' mouth. Tess decided that she had suffered in silence for far too long.  There was a growl.  Then another.  And then another.  Then came the screeches.  The howls.  The hissing and the spitting.  My sister, Tess, was back and in fine form.  That's the spirit!  You go girl.  The nurse understood, right away, that Tess was upset 'cause her mouth was hurtin' her.

Tess' behaviour was actually quite unusual 'cause usually, Tess purrs while at the hospital.  Oh, she growls and howls and screeches alright but she usually saves all that up for those with whom she feels the most comfortable...  her family.  With nurses and doctors, she purrs.  MOUSES!

But Tuesday night was different.  On Tuesday night, Tess decided she was havin' none of this business with peeps lookin' in her mouth.  Wasn't gonna happen.  No way, no how, was she gonna let the nurse look there.

The doctor arrived on the scene and Tess continued to behave as she had with the nurse.  She kept on hissing and spitting and whatnot.  She even made the first peep a little nervous and usually, the first peep is quite good in these situations which is amazin' since Peep #1 was once sent to the peep emergency room after bein' bitten fourteen times by my Auntie Primrose on Bloody Wednesday.  I once blogged all about that, remember?  But I digress.

Usually, whenever any of us are seein' the doctor, the first peep holds us when the doctors and nurses do unmentionable things like takin' our temperatures not in our ears.  But on Tuesday, Tess was hissing and spitting and growling and screeching so much that it was suggested that perhaps the nurse should hold Tess while the doctor looked at those teeth.

The gloves were mentioned.  I'm sure you've heard of the gloves.  The doctor called them kitty gloves but I'm pretty sure I saw once someone on television holding an eagle and it looked to me like they were wearin' the very same pair of gloves.  Thick leather right up to the elbows. 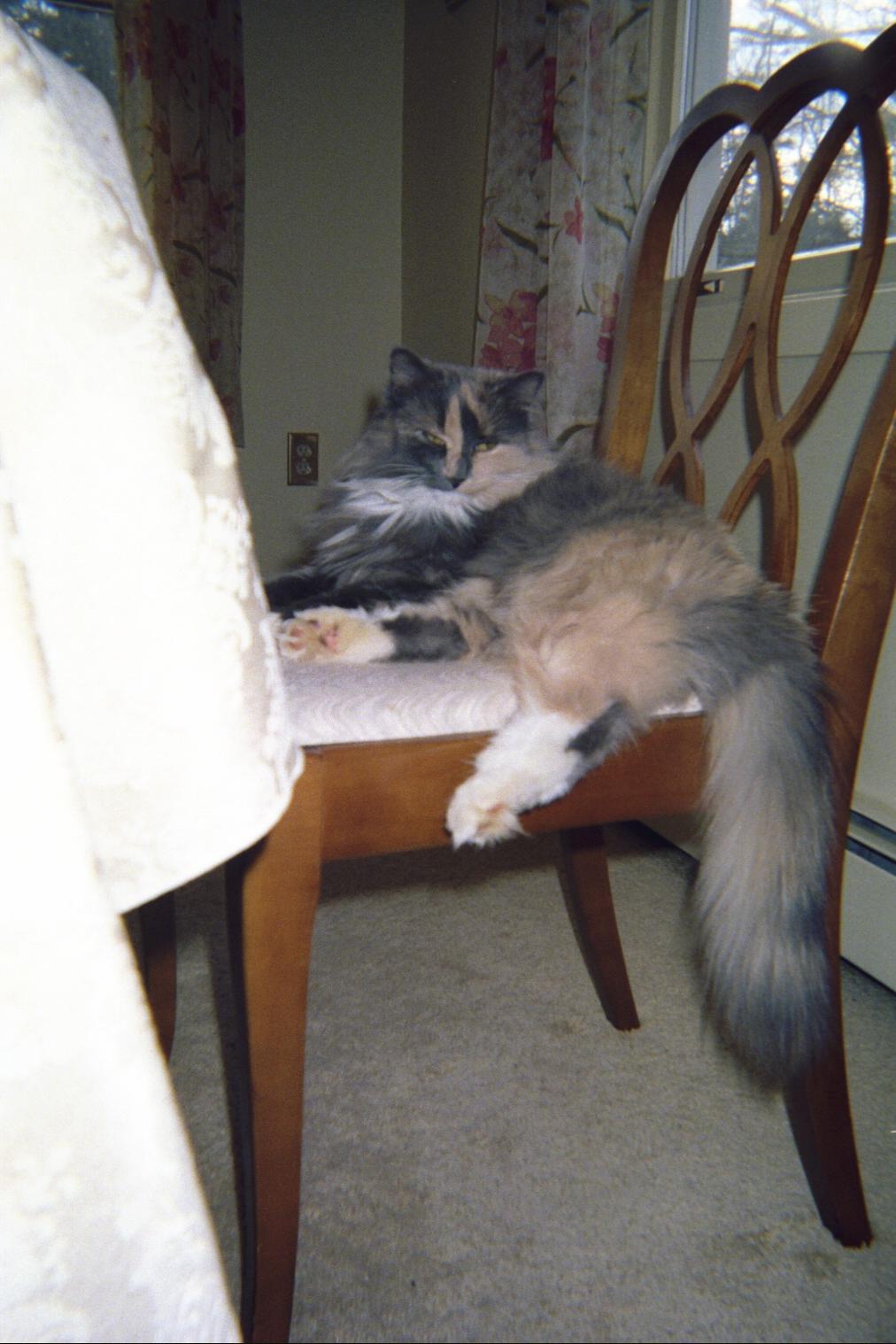 I kind of think it was just decided that an appointment for surgery would be booked and a better look could be taken while Tess was snoozin' on the operatin' table.  I've never heard my sister growl while sleepin' so I think the doctors should be...  NO.  Wait a minute.  On second thought, I have heard my sister Tess growl while sleepin'.  Like I said before, my sister Tess growls at EVERYTHING.

But believe it or not, Tess made it through her very noisy doctor's appointment without a single drop of blood bein' shed.  Not hers or the doctor's or the nurse's or even the peep's.  All in all, it went well considering how upset Tess was that night.

Tess is thinkin' she managed to convince the doctor that her teeth are just fine but I looked on the calender and I happened to notice that she has an appointment booked for Wednesday mornin'.  Yup, it's true.  That means no snacks for any of us on Tuesday night after eight o'clock. MOUSES!  Whatever will we do?

Posted by Seville at Nerissa's Life at 11:14