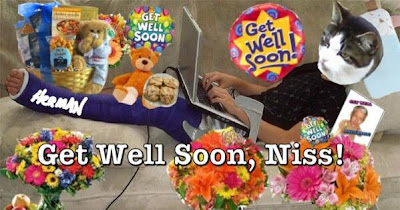 The following is a true story.  At least, it's as true as I can remember... what with my bein' doped up on pain meds following my surgery and all.

It was a week ago today when I had my knee surgery.  Remember 'bout that?  I had to have bionic ligaments implanted in my right knee 'cause I tore all of my originals doing a terribly courageous act, like saving the world or somethin', I am sure.

Still feelin' a little groggy the next morning, I decided to go on a hunger strike.  That was a bad decision 'cause I was already hungry.  Note to self...  always have a good meal before startin' a hunger strike.  Nevertheless, I told my doctor - in no uncertain terms - that I wanted to go home and I wouldn't eat until I saw my peeps.  The doctor just gave me a hug and a kiss, told me I was doin' well, and left me alone...  peepless.  MOUSES! 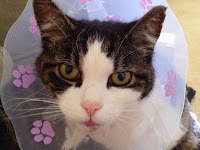 I looked at the plate of food sittin' next to my hospital bed.  It smelled kind of good but there was no way I was gonna give in.  I had made my demands and I was stickin' to 'em.  My tummy thought otherwise.  Next thing I knew, my tummy started doin' the Salsa.  Unfortunately for me, I don't like Salsa.  It has onions, you see.  Cats don't like onions.

I was strong willed.  I held out all day long and never ate a bite.  Day one of my hunger strike was over but I didn't know if I could make it through another night of my ballroom dancin' tummy.

I looked out the window of my hospital room and saw the pizza place next door.  If I meowed at the top of my lungs, would they me?  Probably not.  So near and yet so far.  An inkling of a plan started to form in my mind.  I knew what I needed to do and decided that I was gonna do it!

In the time it takes a mouse to snatch a chunk of cheese, I had my laptop out and turned on.  I immediately pressed this, then that, then clicked a few more keys.  I had to work speedily and yet, quietly, 'cause there were nurses and whatnot wandering throughout the halls.  I knew that if any of them discovered me up and typing, I'd be in trouble for sure.

And it wasn't just the nurses I was tryin' to evade.  What if a dance instructor happened upon my hackin' into the system?  What if the dance instructor was there to teach my tummy new steps?  That dance instructor would put a stop to my pizza orderin' days, for sure, even though I had already decided that my tummy was not gonna be doin' the Rumba or the Salsa or anything else other than digesting my pizza.

I typed in the password to the hospital's wireless and started hacking.  That's right...   I hacked into their system!  Once there, I did a little search for pizza places and easily found the one next door.  I placed my order.

"One extra-large Fancy Feast Grilled Chicken pizza, please.  NO ONIONS!"  My order had been placed.  Hmmm...  delivery or pick-up?  Had to go with delivery, for obvious reasons.  Delivery address...  "Next door.  Pass it through the window with the paw wavin' at you through the bars."  Of course I had to pay for my pizza but that part was easy.  I was already in the hospital's system.  Easy enough to add the pizza to the list of charges on my bill.  Peeps would never notice.  They would just be happy to have me home.  And if they did notice, what were they gonna do about it?  By the time they got the bill, the pizza would already be in my tummy.  And believe-you-me, I needed a little somethin' for my tummy right about then.  No more dancin' for this kitty.

I heard the people in the hallway say their goodbyes to one another and saw the lights turnin' off.  I continued to work by the glow of my computer screen.  Tweeted a few short tweets and said hello to some pals on Facebook. 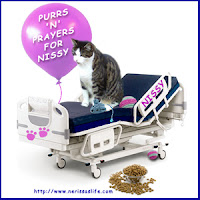 It was around then that I heard a door open and shut outside.  My dinner was on its way.  Yoo-hoo!  YOO-HOO!  I hobbled over to the window, propped it up and extended a paw through the bars.  "Over here," I hissed.

The nice man gingerly passed the pizza box through the bars.  It was like he had never delivered a pizza to a hospital inmate before or something.  MOUSES!  I snatched the box and tossed it onto my bed.  "Thanks, pal," I meowed and in one bionic leap, jumped onto the bed.  The landing kind of hurt but I was in a desperate state.  Desperate for something to eat.  I had the box open in a flash and devoured my pizza.  The best part was the Fancy Feast Grilled Chicken, of course, but I was hungrier than a hungry hippo so I even ate the crust.  It was delicious.

I fell asleep right there and then.  Never moved a whisker all night long.  No more dance steps goin' on in this kitty's tummy.  This kitty's tummy was happy as a clam.  Clams...  Mmmm...  Must stay on track.

Anywho...  I was rudely awakened the next morning by the arrival of the hospital staff.  I looked down on my bed and saw the empty pizza box lying there.  Oh-oh...  The door to my room opened and my doctor peered in.  I grabbed that pizza box and flung it past her head.  Not to hit her, mind you.  Just to get rid of the evidence.

My doctor looked at the pizza box lying on the floor next to her feet.  "What's this?" she asked.

"I don't know," I answered as innocently as only a cat can.  "Must have been left there last night by some hungry dog or something.  Dogs are quite partial to pizza, you know."

My doctor pursed her lips and narrowed her eyes.  You know something?  I kind of think that maybe she didn't believe me.  Weird, huh?  I mean...  I'm a cat and we cats are always believable, right?  Of course we are.  But just in case, I made a mental note to hack back into the hospital's database and change the billing of the pizza to some dog's account.  That would take care of things, for sure.  I would bill the pizza to a patient named Rover or Barkley or Lassie or anything doggie like that.  And that's just what I did.
Posted by Seville at Nerissa's Life at 10:55