the cone of shame 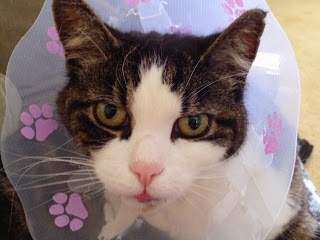 Yup.  I've got one.  I've got a cone of shame and I'm wearing it.  MOUSES!   And to add insult to injury, do you see those paw prints on my cone of shame?  They're pink!  That's right...  pink!!!  Gosh, this explains a lot.  If the doctors and nurses at my hospital don't know I'm a boy, after attending years and years of medical school and all, it's no wonder ol' peepers here got it wrong and gave me - a handsome MANcat - a girls' name!

I'm not overly fond of the cone of shame.  In fact, on the first day home, I managed to get it off, twice.  Then, early the next morning, I did it again!  No one knows how I'm doin' this and I'm not talking.  I need to keep my options open.

The cone gets in my way, you see.  I can't wash up properly with it on.  Even the peep made a bit of a derogatory comment 'bout my face lookin' a little dirty, yesterday.  Excuse me, but...  how is a cat supposed to wash his face while wearin' the cone of shame?  It's pretty much impossible.  Believe me, I've tried so I should know.  Ol' peepers suggested that maybe she'd have to wash my face for me.  Once wash cloths - wet wash cloths - were mentioned, I knew I had to remove that cone and fast.  So I did.  Had to be done.  'Nough said.

The cone gets in my way when I'm walkin', too.  It's always bangin' into stuff.  Table legs, chair legs, my crate, you name it.  Anything in my way, gets banged into with the cone.  Well...  the cone doesn't bang into peeps' legs too much.  The peeps' legs seem to have enough sense to get out of the way of the cone.  Furniture legs, apparently, don't have that much sense.

I guess the fact that I'm still a little loopy doesn't help, either.  I've got a patch, you see.  Well, I had a patch.  More on that in a moment.  Anywho...  I came home wearin' a patch.  No...  it wasn't a patch to quite smoking.  Cats don't smoke!  This was a narcotic patch to keep some of the pain away.  My knee surgery was a super duper big one so I needed some pain meds so that it wouldn't hurt too much. 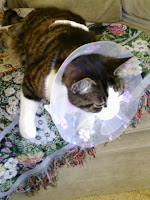 Actually, it was 'cause of that patch that I had to wear the cone.  The doctor said that under no circumstances was I allowed to chew on the patch.  Doin' so could cause a fatal overdose or somethin'.  I had to be really, really careful around the patch.

Well, yesterday morning, ol' peepers took me out of my crate for a bit and then put me back in.  She came back into the livin' room - which is where I have been convalescing - and found me coneless.  Yup, I had removed my cone for a third time.  I had also removed the bandage holdin' on my pain patch.  I hadn't chewed it or anything though.  The peep removed my patch so that I couldn't hurt myself with it and called the doctor.  The doctor on call said it would be okay for me to be done with the patch now as long I was still getting my liquid pain meds so, I'm very happy to say, I am now patch free.  But still a bit loopy, I'm afraid.

Still got that darned cone, too.  I have to keep on wearin' it to make sure I won't chew on my knee.  But the peep is a good peep.  She has been spendin' lots of time with me in the livin' room and when she's there, I can come out of the crate and lie next to her on the couch and she removes the cone.  I can't chew on my knee if she's right there, watching me, so it's safe.  In fact, I'm coneless right now.  Have been for an hour or so.  Even managed to wash my face this morning so I'm lookin' all spiffy and handsome.  Life is good.

I mentioned the crate.  It's not too bad.  Have to spend all my unattended time in there which is annoying but I've got my own private litter box.  Kind of like an en-suite, I suppose.  And when a peep is with me, I'm spendin' my time up on the couch.  I've got a nice little throw to lie upon.  Unfortunately, somebody threw the throw on the wrong way and it's inside out or somethin'.  And when I say somebody, I really mean one of the peeps.  Just not quite sure which one is was. 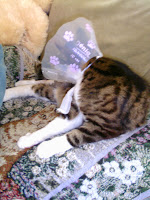 None of the other cats are allowed in the livin' room when I'm in the cage but when I'm out of it, my brother Seville has been visitin' a lot.  He's here, right now.  Yup.  I'm on the couch with peep #1 and Seville is lying on the floor next to us.  When he walked past, I went to catch his tail!  Did that twice.  Not sure what Seville thought 'bout that but the peep was pleased.  She says that I must be feelin' a little bit better to be chasin' other cats' tails.  Unfortunately, Seville is now lying down with his tail tucked safely underneath him.  Maybe I'll be able to catch it later.  A cat can always hope.

I just want to add that I truly appreciate how so many of you came to visit me on my blog in the last few days.  I want you all to know that I will be catching up with my visits very soon.  It's just takin' a little time for me to get back to bloggin' normality and all.  Lots of naps are required while recovering from major surgery and, it seems, it's hard to blog and nap at the same time.  I can do lots of things in my sleep but it turns out that blogging isn't one of them.  Gotta be wide awake for important stuff like blogging.  But I'll see you all very soon, I promise.  Right now though, I think I'm gonna stretch out here, next to the peep, and rest my eyes for a little bit.

Posted by Seville at Nerissa's Life at 10:28