Tobias was a mama 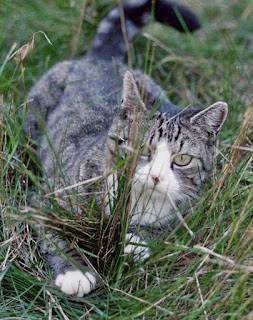 That's right...  here in Canada, and many other parts of the world, today is Mama's Day.  Today is the day we set aside to celebrate all the mamas, mothers, muzzers and mummies out there.  It's a great day, for sure.

My peeps are very much into the philosophy of havin' all us cats altered so that we can't ever become mamas or dads.  My peeps love kittens as much as the next person - maybe even more - but they love cats, too.  Peep #2 says that kittens are cute - obviously - but so are cats.  Peep #1 says that too many of the kittens born today will end up at kill shelters in the not so distant future so, there will be no kittens for any of us kitties.  We will forever be the kittens in our peeps' eyes.

Sometimes, however, plans work out differently than planned. 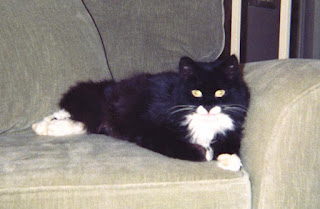 Many years ago now, my sister Tobias came to live with us.  She had been livin' outside for three years before the peeps convinced her to come inside.  Toby was a truly feral kitty.  Terrified of all peeps...  even mine.  For the first year, she wouldn't even let the peeps see her.  They just caught glimpses now and then.  Eventually, she allowed them to see her and then even hear her.  Then, one bitterly cold night, Tobias came inside.  She lived in the basement for the next few months.  Not because the peeps kept her down there like a prisoner or anything but rather, 'cause she was still too scared to let 'em touch her.

Now for the three years Toby had been outside, the peeps thought she was a little boy...  thus, the name.  They soon learnt otherwise.  Tobias went into heat!  What to do?  What to do???  The peeps couldn't catch her to take her to the hospital to be spayed.  She wouldn't let 'em near her.

Plus, my older brother Calista, who was just about as feral as feral can be, had never been neutered.  Peeps couldn't catch him if their lives depended upon it.  He had started coming into the house and they were seeing the day in the distant future when they might be able to pick him up and take him to the hospital but that day had not yet come.  So they formulated a plan...  a plan to keep Calista away from Tobias.  The two must never meet. 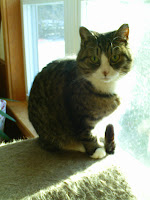 One day, one of the peeps thought Calista was outside when he was actually in and opened the door to the basement.  That's all it took.  Toby was preggers!  MOUSES!!!

Oddly enough, that pregnancy sort of saved Tobias' life.  The peeps had been gettin' more and more worried 'bout Toby accidentally gettin' out of the house.  She was ready to make an escape, first chance she got.  I know, 'cause she told me.  No one could touch her, never mind catch her.  If she spotted either peep approaching her, she'd dart away like a kitty Flash.  But almost the very day after Toby met up with Calista, something changed.  All of a sudden, Peep #1 was allowed to touch her and even pick her up.  Peep says it must have been hormones, or somethin' like that.

At the end of May that year, Tobias gave birth to little Aristotle.  I say little 'cause he was a baby but...  peeps say Ari was the biggest newborn kitten they had ever seen!  Almost the size of peep #1's hand, she says.  The peep should know, too, 'cause she was there as the actin' midwife or something.  I know all 'bout this midwifery business now 'cause I watch Call the Midwife with the peeps every Sunday on PBS.

My sister was an amazin' little mama.  I wasn't allowed downstairs with her and Aristotle but the peep says Toby was wonderful.  She loved up her baby like no mama had ever loved a baby before.  The peeps now believe she must have been preggers many times while livin' outside but all her babies died, shortly after birth.  Ari might have been the very first baby she ever had the chance to love up properly.

Ari grew and grew and the peeps adored him to no end.  Peep #1 says he would get up and toddle towards the sound of her voice.  She says he was a really special kitty.  So bright and lovable and cute and...  well...  you know...  all the wonderful things we kitties can be.

Unfortunately, when Aristotle was exactly four weeks old, the unthinkable happened.  He was just fine early that morning but a few hours later, he couldn't even hold up his head.  The peeps rushed him to the hospital but there was nothin' the doctors could do.  There was fluid around his heart.  They said it might have been some sort of congenital thing.  Ari went to live up in Heaven that very same day.  The peeps came home crying.  Tobias was crying, too.

But for four short weeks, Toby had been allowed the chance to be a mama.  To have her baby with her and love him up as only a mama can.  She can't have any other babies now but still has the memories of her beloved Aristotle.

I suspect that Ari is up in Heaven now with my mama.  I know that my mama will be takin' excellent care of him, there.  After all, my Mama Madison is his grandmother.  Remember?  Calista, Ari's dad, was my older brother.  Today, of all days, Ari will be up in Heaven with Madison and Calista.  I bet they're all chasin' butterflies through sun drenched fields of nip with soft breezes caressing their fur.  And every now and then, Ari will look down upon his mama, Tobias, and my Mama Madison will look down upon me, her son, and they'll see us lookin' right back up at 'em...   sending our love and best wishes for Mama's Day.