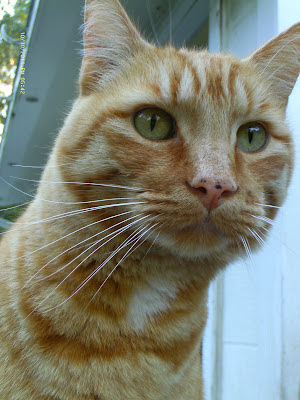 For mousin' out loud, Peepers.  You could have turned my computer on for me BEFORE goin' out this mornin', you know.  It's already afternoon and I don't have today's blog post written yet!

And to think I was gonna blog somethin' nice about you, today.

AS IN PAST TENSE.

But truth be told, I DID have important stuff about which to blog, today.  Thing is, we're havin' a provincial election here in Nova Scotia.  Yup, the election was called, Saturday, and do you know what?

Not a single political party asked me to run.

Their mistake, for sure.  I mean, WHO WOULDN'T vote for me?

Well, maybe not dogs, on account of my bein' a cat, and all.

NOT THAT THERE'S ANYTHIN' WRONG with bein' a cat.  Quite the opposite, in fact.  But dogs will be dogs, and very rarely does a dog vote for a cat.

Plus there's that mouse I told off the other day who might refuse to vote for me, EVEN THOUGH that mouse deserved a right tellin' off, for sure.  And mice tend to have big families, you see, and I'm betttin' all those family members of his wouldn't put a little 'x' by my name, either.

Good thing they, too, can't vote.

Seriously though, who WOULDN'T vote for me?  After all, I'm a cat.  Cats are smart.  Cats are cute.  Cats are way smarter and way cuter than peeps.  WAY.  It's a fact.

I know, I know...  I know what you're thinkin'.  You're thinkin', we cats often have a skeleton or two in our closets and everyone knows a skeleton in the closet is the end of most political careers.  But do you know what?  IT'S NOT TRUE FOR CATS.   Any skeletons in my closet are the skeletons of mice.

Which is another reason that mouse I told off might not give me his vote.

If he had one.

But come on...  HONESTLY, if one of the political parties had asked me to run - ANY ONE of those parties in play - I would have had that ridin' locked up.  It would have been mine, ALL mine.  I'd have been a shoe in, for sure.

Even though, as a cat, I don't wear shoes.

But alas, I wasn't asked.

Oh well, it's their loss.  I'm gonna hold my tail high, knowin' the fact I wasn't ask to run in the provincial election says a whole lot more 'bout them than it does about me.  A whole lot more, for sure.

And then I'm gonna do what all cats do: gonna go take a nap.

Remember to mask up, too.
Posted by Seville at Nerissa's Life at 15:44