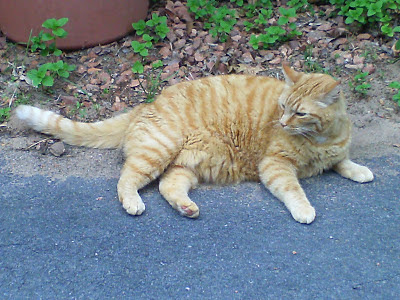 Not that it would matter if I were topless.  You know, on account of my bein' a mancat and all, and as a cat, I'S ALL COVERED IN FUR.

But still, it doesn't solve my problem.  The correctin' of the auto correct, I mean.  Nope, even with that correction, I'm still left with the same dilemma.

The thing is, the peep has been very busy helpin' me edit parts of my book, and as a result...

Well as a result, she hasn't been doin' anythin' embarrassing about which I can write.

Well nothin' TOO embarrassing, I should say.  There was that...

Nah, that wasn't all that interestin'.  Not worth writin' about at all.

WAIT A MINUTE.  Scratch that.  That embarrassing story was about me.

So how 'bout those Raptors, huh?  Gotta paw it to them, for sure.

Yup, those Raptors do NOTHIN' embarrassing, at all.  Good thing I'm not countin' on them to provide me with fodder for my blog.  If I were, I'd have no humiliating tales to tell, for sure.

But back to the bit 'bout my bein' topic-less for today's blog.  Like I said earlier, the peep has been SO busy helpin' me with my book that...

I know!  I should share a second except from my book.  Yeah, that's exactly what I'll do.  ENJOY.  Purrs.

I stared at Peter and Jeffry in disbelief.  Neither one of them was volunteering any information about their being top secret spies, to the two RCMP officers sitting in our living room.

But still, identifying oneself as a CSISS agent to the RCMP wasn’t like taking out a full-page ad in the local paper.

Nah, law enforcement agencies were supposed to work together these days.  Work paw in paw, so to speak.  Share Intel and all that stuff, and…

“So neither one of you heard any kind of commotion, or saw any suspicious activity, in the woods out back?” one RCMP officer asked.

Peter shook his had.  “Nothing at all.  Of course we’ve only been here for a few days.  When did you say those two men were killed?”

“Cat sitting,” Jeffry answered, smugly, as he pointed in my direction.

“Hey!  It’s not like I need a babysitter or anything.”  I puffed out my chest to show everyone what a big, strong mancat I am.  I glanced over at Rushy.  All he had to do was take a deep breath, I begrudgingly realized, and the chest furs in that fluffy mane of his puffed out naturally.  I, on the other paw, go to puff out my chest and I look like I’m about to start wheezing.  MOUSES!

“And the home owner is…”  The RCMP officer was obviously fishing for information.

And no fish supper for you, Mr. Officer Sir, I thought to myself.  Nope, you’re gonna have to keep on fishing if you‘re planning on eating tonight.

Fish…  Hmmm…  I made a mental note to have Jeffry prepare fish for us for supper.  Either whitefish or salmon would do.

I tugged on Peter’s pant leg, and he attempted to brush me away with his foot.  I tugged harder and one of my claws caught hold of a thread.  Clearly, the man’s pants were cut from cheap cloth, or they wouldn’t give way so easily.  “Sorry ’bout that,” I shrugged, “but…”

Peter glared at me.  I glared right back, then attempted to flick away the wool thread from his pants, now caught on my paw.

“Stop tearing at my clothes,” Peter growled under his breath.

“You stop not paying attention to me,” I hissed back, “and I won‘t have to tear at your clothes.  Don’t you,” and I motioned for Peter to bend down so that I could quietly whisper what I had to say in his ear.  “Don’t you think you should tell them about…  You know…  Our missing peep?”

Peter straightened up.  “Cats,” he laughed.  “They do come up with the strangest things.”

I let out a low growl, half directed toward Peter and his ridiculous comment, and half because, try as I might, I could not get that stupid cheap thread from his pant leg out from between my claws.

“Here, let me help you with that,” and one of the RCMP officers picked me up.

I scowled at him.  Who the mouses did he think he was, picking me up like that?  Of all the nerve.  The least he could do was ask for permission, first.  Some peeps think they can do whatever they want to a cat, and…

“Oh!  You’ve managed to get that nasty thread out from between my claws.  Well…  Well thank you, then.  But next time, if there is a next time, ask first before picking me up.  Okay?”

The officer gave me a quick chin scritch before setting me back down on the floor.  “Nice cat,” he murmured.  I wasn’t sure if he was speaking directly to me, in which case he sounded a tad condescending, or to Peter, telling him I was nice.  Either way, getting the chin scritch made it worth my while, I decided, so I swallowed the low growl I could feel bubbling to the surface at the back of my throat.  MOUSES!

Oohhh...  And if you missed the first excerpt from my upcoming book, you can find it right here:  FIRST EXCERPT FROM MY BOOK.  It's at the end of the post.  purrs

Posted by Seville at Nerissa's Life at 16:09