and I liked it 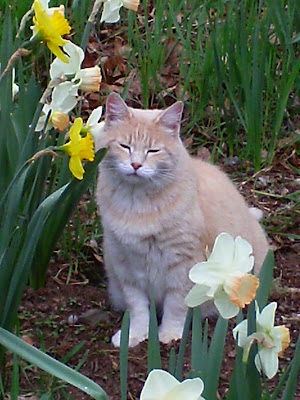 I ate pumpkin, and I liked it.

Okay, so I wasn't actually the one who ate the pumpkin.  It was Mason who did that.

Now don't get me wrong.  Mason didn't go out and buy herself a pumpkin and eat it whole or anythin' like that.  Nor did she eat it straight out of a tin.  She didn't even eat it straight!  It was all mushed up with the fanciest of the feasts, if you know what I mean.  You know, in order to camouflage the taste of the orange stuff.

But do you know what?

Uh-huh.  She did.  Well she liked what she was eatin', anyway.  Whether or not she knew she was eatin' pumpkin' is another matter. .

Excuse me, my friends.  My sister Mason is tuggin' on my tail, tryin' to get my attention.

Okay, so Mason says she did know she was eatin' pumpkin, on account of the peep tellin' her she was giving her pumpkin before givin' it to her.  She also says that it tasted pretty good.  Probably on account of her not really bein' able to taste it over the fancy schmancy feasty bit and all, and...

Oh.  And apparently, Mason would appreciate it if I did not mention that the reason the peep gave her the pumpkin was on account of her gettin' herself all constipated and stuff a couple weeks ago.

So I won't mention that.

Hey!  What's with the smacky-paw to the back of my head, Mason?

But back to that pumpkin.  I, Seville the Cat, am not partial to cucurbits of any kind.  Not pumpkins, nor courgettes, nor cucumbers, nor...

OH ESPECIALLY NOT CUCUMBERS.  My mouses, you all remember way back when, when peeps all 'round the world went out of their way to scare us kitties with cucumbers?

Mason says that walkin' and runnin'-as-fast-as-my-kitty-paws-will-move are not the same thing.

But let's get back to those pumpkins, shall we?

Mason is all 'bout the pumpkins these days.  Of course, she has always had a thing for pumpkins.  It's a girl thing, you see.  Mason fancies herself as some kinda Cinderella type kitty, and thinks that one day she'll find a fairy godmother who will turn a pumpkin into a former-mouse-now-horse drawn golden carriage, or something like that.

Personally, I'd rather skip the ol' pumpkin carriage and instead get my paws on those mice before they turn into horses.

But anyway, Peep #1 found a big ol' stinky poopy poop in the litter box this mornin'.  Yup, she was super excited, for sure.  You know, 'cause she's pretty sure it was Mason's.

Funny that, isn't it.  Not a question, but a statement of fact.  You ever notice how excited peeps get 'bout our poops?  It's a peep thing, I think.  Must be, 'cause let me tell you somethin'; no self-respectin' cat has EVER gotten that excited 'bout someone else's...

Fine.  APPARENTLY, the act of mentionin' a sister's bathroom habits is...

What was that word you used, Mason? 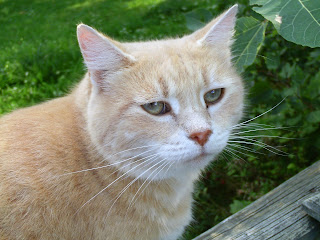 But back to those pumpkins once more.