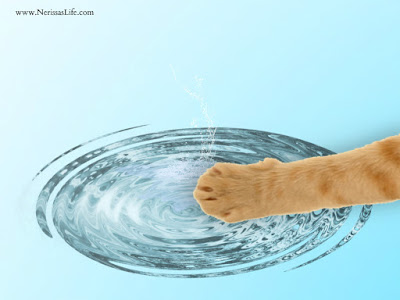 Previously, on Nerissa's Life:  Mason pointed to the two cloud figures now towering beside them.  Either they had grown in size, or these two were different cloud people.  Bigger cloud people.  Bigger and definitely ANGRIER, too.  And directly below where they stood, was a slowly forming pool of water.  MOUSES!

"Hoohh-boy," Seville whistled.   "Methinks this is not good."

"There's no time to be talking 'bout details at the mo," Seville told his sister.  "I'm sure there's more than enough blame to go around, but right now, we need to get out of here, pronto."  Grabbing Mason by the tail, he yelled, "COME ON!"

Seville made a run for the far wall, the one through which the cats had entered the room, but in doing so, he stepped in the puddle of water beneath the cloud figures, which was slowly spreading across the floor.  His right front paw slid out from underneath him.  Trying to catch his fall, he stepped in the ever growing puddle with his left front paw.  That one, too, slid out from underneath him, and before Seville knew it, he was lying on the floor with all four paws splayed out in different directions.

"Get up!  GET UP!" Mason yelled.  "You've got my tail caught under that tummy of yours."

"Hey!" Seville sharply cried.  "Is that another one of your fat jokes, Mason?"

"This is no joking matter," Mason growled.  "I can't escape because you've got hold of my tail."

"Oh.  Sorry."  Seville climbed to his paws, releasing his grasp of Mason's tail.  But mere seconds later, his paws started to slip again and once more, he was down on the floor.

Seeing Seville was once again incapacitated, Mason grabbed Seville by his tail, and started to pull.  "I can't do it!" she puffed.  "You're too heavy.  How many treats have you been eating?"

Seville screwed up his face in anger.  "Now THAT WAS a fat joke, for sure.  Those treats only have one or two calories a piece, you know.  And it's not like I'm the only one eating 'em, either.  MOUSES!"

Mason scowled.  "One or two calories adds up when you eat an entire package at a time.  They're treats, not meals.  Don't you EVER listen to the peep when she tells you stuff?"

"I listen when I need to, but the fact is, when she's talkin' about stuff I don't wanna hear, I don't need to listen."  Seville wanted to stamp a paw for emphasis, but as he was still lying face down on the floor, he could manage nothing more than a weak slapping motion.  "Awww...  MOUSES!" he growled.  "MOUSES!"

Seville attempted a few strokes of the doggy paddle, but found the puddle to be too shallow.  "It won't work," he whimpered.  "The water's not deep enough for swimmin'."  A tear rolled down his cheek and onto the floor, adding to the puddle of water beneath him.

"Try floating, then.  If you can float, maybe I can haul you by your tail.  Like a tow boat or something."  Mason grabbed Seville by his tail again and pulled, but before long, she, too, was slipping and sliding on the wet floor.  Her hind legs flew out from underneath her and she landed with a hard thump on her tail.  "OUCH!"  She rubbed her tail with a paw.  "It's no good," she moaned.  "I can't pull you away from those creatures."

"I'm not leaving you alone up here, Seville."  Mason shook her head, adamantly.  "No way, no how.  I'm not leaving you here with those cloud figures on the loose.  We're in this together," and she placed one of her paws on one of Seville's.  "We're family," she purred.  "Family doesn't leave family to fend for themselves in sticky situations." 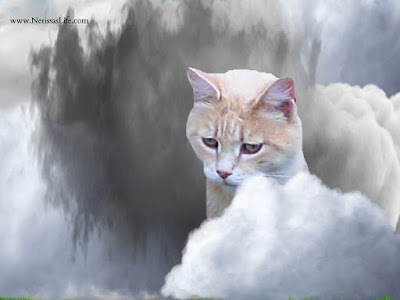 "Actually," Seville corrected his sister, "this particular situation is more slippery, than sticky.  My gosh, if I could get my paws to stick to this here wet marble floor, I'd be able to get up and out, and...  OUCH!" he yelled as Mason smacky-pawed him in the ear.  "What happened to all your mushy talk about family?"

"Being family," growled Mason, "doesn't prevent me from giving you a good smacky-paw when needed.  In fact," she added in a whisper, "it's usually better to smacky-paw your fur-sibs than complete strangers.  Smacky-pawing strangers is frowned upon by the peeps."

"Smacky-pawing family is frowned upon, too," muttered Seville.  "Peep #1 says..."

Driven by both fear and desperation, along with a sudden surge of adrenalin, Seville climbed to his paws.  Balancing himself on all fours, precariously, but managing to maintain an upright position, he looked over at his sister.  "RUN!" he yelled.  "RUN!"

Miraculously, both cats managed to take one or two steps forward, but the pool of water from the cloud figures had continued to grow and Seville's third step landed him, once again, on a slippery patch.  Down he went once more, this time hitting his head, HARD, on the white marble floor.  Everything went dark and Seville wasn't sure if the cloud figures' shadow, overhead, was blotting out all the light, or if he had been knocked unconscious again.  Like when he first arrived inside the cloud.

"Seville.  Seville?  Seville, are you alright?"

Seville opened his eyes and saw Peep #1 kneeling on the ground next to him.  She was leaning over him, directly overhead, exactly where the cloud figures' shadow had been, moments before.  The peep's face looked full of worry.

"Seville, are you okay?" the peep asked, gently.

Seville managed to turn his head to his right.  He saw Mason standing there, front paws on her hips, looking worried but scowling, too.  "You NEVER listen, Seville.  You never listen.  And just LOOK at what happened to you because of it."

"What happened?" Seville managed to ask.

"That sudden gust of wind tore a tile right off the roof," the peep began.

"Oh yeah, I remember seeing that..." Seville thought aloud.  "It flew right by me, it did."

"IT DID NOT," Mason stated angrily.  "It didn't fly by you at all.  It hit you on your head, and  knocked you right out.  You've been lyin' there for ages now, unconscious.  Either that or you've been napping."

"Really."  Mason narrowed her eyes and pursed her lips.  "The peep TOLD you to stop watering your nip plants and to come inside.  She knew there was a storm coming..  She knew you'd be a lot safer in the house, and..."

"MY NIP PLANTS!"  Seville cried as he bolted up into a sitting position.  "Are they okay?  Did they get enough water?"

"I should think so," muttered Mason.  "After you were knocked out by that roof tile, it started to rain.  It rained tonnes.  And," she added with a growl, "because the peep and I had to be out here with you while you were lying there on the ground, we both got rained on, too.  You know how I don't like the rain, Seville.  It messes up my fur."

But Seville didn't hear Mason's lecture, for at that moment, he looked up at the sky.  Off in the distance was a giant storm cloud, moving quickly eastward, and away from the cats' house.  Seville squinted at the cloud.  Was that?  Could that be?  Yes, yes it was.  It was difficult to see well, due to the growing distance between himself and the cloud, but Seville was sure he could see a young boy with poker straight hair looking out a window, from inside the cloud.  And the boy was waving at Seville.  He was waving goodbye. 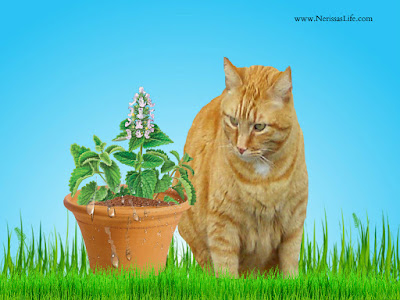 "Sorry, Mason," and Seville turned his attention back to his sister.  "You were sayin'?"

"I was saying, YOU NEVER LISTEN."  Mason stamped her paws.  Turning to the peep she said, "YOU deal with him.  Maybe he'll be more inclined to listen to you.  BROTHERS," she grumbled.  "BROTHERS!"  She then stomped off toward the house.

Seville looked up at Peep #1 and shrugged his shoulders.  "What's up with her?  Do you know? MOUSES!"

Posted by Seville at Nerissa's Life at 18:57