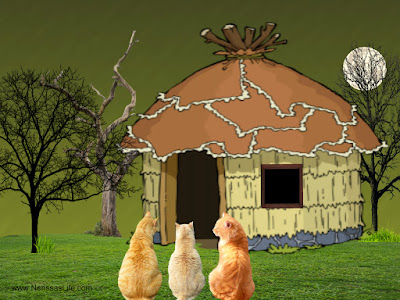 The young lad shrugged his shoulders.  "Cats!  They can be so strange, sometimes," he murmured to himself, before heading off home to his mother.

Mason and Andy were in hot pursuit of Seville as he ran down the path as fast as his four paws would carry him.  Turning a corner, Seville came to a small clearing.

Seville skidded to a stop, and Mason ran into him, pushing him forward.  Moments later, Anderson ran into both Mason and Seville, causing all three to tumble, head over heels, until finally, they all came to rest inches away from their destination.

In unison, the three cats let out a long whistle.

Seville's jaw dropped, for he could barely believe what stood before him:  A house made entirely of nip.

Mason shook her head in disbelief.

"This, here, is where the Weasel Syndicate has set up shop," Seville stated.  "This is what they were talkin' about in that Paper Tablet Tabloid, for sure!"

"But why on Earth would the Weasel Syndicate build a house out of catnip?" asked Mason.  "Something isn't adding up."

The other cats turned to stare at him.  "What?  The answer is always four, isn't it?  I'm always hearing people say, 'two plus two equals four'."

"Oh for the love of mouses," and Seville rolled his eyes.

At that moment, a wicked witch...  I mean, a WEASEL, wearing a wicked witch's hat and cloak, exited the house made entirely of nip.  Seeing the three cats, she smiled the most sinister of smiles.  "And what do we have here?" she asked.  Grabbing hold of Andy by his mane, she hauled him up onto his paws, and dragged him inside the house.   "Now don't you look DELICIOUS," she sneered.

"What the mouses?" cried Seville.  He and Mason scrambled to their paws and together, they darted inside the catnip house before the door closed behind Andy and the weaselly wicked witch.

"You had better do as he says!" cried Seville, giving the witchy weasel a good smacky-paw across the back of her legs.  "No one treats my brother like that.  NO ONE BUT ME."

Mason grabbed hold of Seville by the tail and tugged, "Sivvers, look.  Who are all these..." and she motioned in front of her.  "These non-weasels?"

Seville stopped mid smacky-paw - for he was about to introduce the wicked witch to his other front paw - and looked about.  "WHAT THE MOUSES?" he gasped.

The house made entirely of nip had but only the one room, and in the center of that room was a small table.  Sitting around it were three little pigs, bickering about building supplies.  In one corner was a little old lady, rocking back and forth on a rocking chair, and knitting what appeared to be a sweater, all the while complaining about her absentee granddaughter. 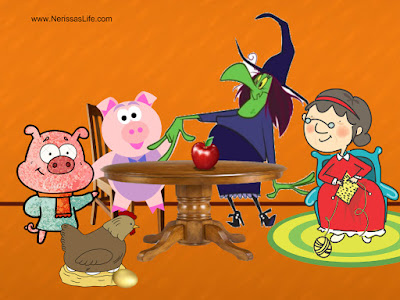 Seville jumped at the sound and turned to find a hen.

"Cluck, cluck, cluck!" the hen cried again, this time more loudly.  The witchy weasel reached under the hen and pulled out an egg.  Holding it up to the light, it sparkled as if made out of solid gold.

Then came a knock on the door, and from the other side could be heard an evil sounding voice.  "Let me in!  LET ME IN!" the voice cried.

Everyone sat still, and the house made entirely of catnip became deathly quiet.

"Oh for mousin' out loud.  Hold onto your horses, there," ordered Mason, padding over to the door and flinging it wide open.

"AH...  AH...  AH...   ACHOO!" and the wolf sneezed a sneeze so violent, it shook the entire niphouse, causing bits of catnip to fall from the ceiling.

"All this falling catnip is making a mess of my knitting!" the old lady cried.

Andy dashed over to the old lady's side.  "Messes are sort of my speciality," he explained.  "What you want to do is..."

"What you wanna do," Seville interjected, "is stop makin' stupid ol' sweaters, and start makin' nip toys.  They're smaller, and a whole lot faster to knit.  And look at all this nip you have here to use!"  He grabbed hold of a piece of the wall, held it to his nose, and breathed in deeply.  "Gosh darn it," Seville grumbled.  "Now I've got the munchies.  MOUSES!"

"Hey!  HEY!  HEY!" cried the wolf, demanding everyone's attention.  "Someone called me, asking for an estimate.  I'm here to do an estimate for a demolition job!"

"OH WITCHY WEASEL LADY..." Seville called out.  "You have any snacks on paw?  All this nip has given me the munchies."

"I TOLD you to build your house out of brick," said one of the three pigs to a brother.  "Using catnip was bound to attract cats."

"And what's wrong with that?" Mason spun on her hind paws.  Nose-to-nose now with the little pig, she demanded,  "YOU HAVE A PROBLEM WITH CATS?"


Suddenly, Seville woke with a start. 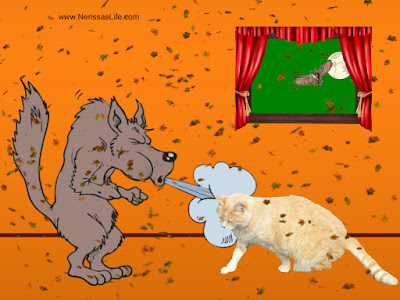 "I'm going up to bed now, Sweetie," and Peep #1 gently kissed Seville on the top of his head.  "Are you sleeping down here on the chesterfield, or are you coming upstairs?"

Seville stretched out a paw, then brought it close as if hugging himself, before wrapping it around one ear.  Letting out a loud sigh, he fell back to sleep.  Mason lay on the floor next to the chesterfield, purring as loudly as only a Mason can purr.  Anderson got to his paws and following Peep #1 into the kitchen, hoping there might be a treat or two in the offing.

And they all lived happily ever after.