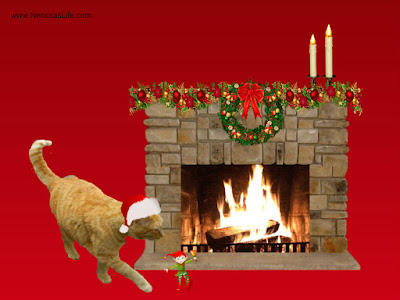 'Twas the night before Christmas, and all through the house, not a creature was stirring.  Not even a...

"Wait a minute," and Seville stopped in his tracks.  "Wait a nip pickin' mousin' minute.  Just who the mousie mousin' mouses are you?"  Seville eyed the little creature standing before him.  Screwing up his nose, he sniffed the air.  "You smell like...  Like... Like sugar cookies, I think.  Sugar cookies?  MOUSES!"

The creature looked around furtively and made a dash for under the chesterfield, but he wasn't fast enough, and  Seville snagged the corner of his jacket with a claw.  He lifted his paw and dangled the creature in the air, inspecting him up and down.  "I SAID, who the mousie mouses are you?"

"Well I'm not a mouse," the creature answered, a tremor in his voice.

"I can see that.  I'm not stupid, you know.  I'm a cat and cats, by nature, are extremely intelligent beings.  Hmmm...  You are mouse-sized, though."

"But not mouse-tasting," the creature quickly said.

"Don't worry," and Seville placed the creature back onto the floor.  "You look too grizzly for good eatin'.  Plus, I don't eat elves."

The creature breathed a sigh of relief.

"Yes, I know you're an elf, and let me tell you somethin', little guy.  There's no better way for a cat to end up on Santa's naughty list, than to eat one of his elves.  You eat one of the big guy's elves, and you end up on that list faster than you can say, cheese on a catnip pizza."  Seville narrowed his eyes.  "But even though I know you're an elf, I still expect an explanation as to why you're here.  Just what the mousie mouses are you doin' in my house, on Christmas Eve?  Huh?  HUH?  Answer me that, why don't ya."

"SPIT IT OUT!" Seville yelled.  "But don't actually spit, okay?  We're not allowed to spit in the house.  MOUSES!"

At that moment, Mason entered the room.  She looked at the elf on the floor, and then at her brother, Seville.  "Why is that knickknack on the floor?  Did you knock it down?" she asked.

Mason rolled her eyes.  "It might look like an elf, but it's really a knickknack.  It's an elf knickknack, I guess.  It's supposed to be up on the mantle.  It's an Elf on the Shelf."

Seville peered at the elf.  "But Mason, he's alive.  Knickknacks aren't supposed to be alive, are they?  Nah, that there elf is an actual elf.  A real live elf, and not a shelf elf, whatever that is.  Look," and Seville poked the elf with a claw.

"What the mouses were you doin' up on our shelf?" Seville asked.

Mason and Seville dropped their jaws, in unison.

The elf looked down at the floor.  "I'm an elf on a shelf, okay?  A shelf elf, as you put it.  I couldn't cut it as a toy making elf," and he looked down at his hands.  "I'm all thumbs when it comes to making toys, so Santa thought maybe I could be a shelf elf.  And yes, we shelf elves are spies of sorts, but..."

"But what." and Seville pursed his lips together.

"But apparently I can't cut it as a shelf elf, either," Alfie sighed.  "I was supposed to be spying on a family with three little boys who were caught bullying other children, but I missed my train connection in New Brunswick, and in my hurry to catch the next train, I got on one going in the wrong direction, and..."

"And?" Seville asked through gritted teeth.

Seville sat back on his haunches.  "Hmmm..."

"And now I don't know how to get back to the North Pole," the elf added.  "I had hoped that when Santa didn't get any reports from me - reports about those three little boys - that he would send out a search party, but no one has come.  And tonight is Christmas Eve.  If I don't get home tonight, I'll be stuck here until next Christmas." 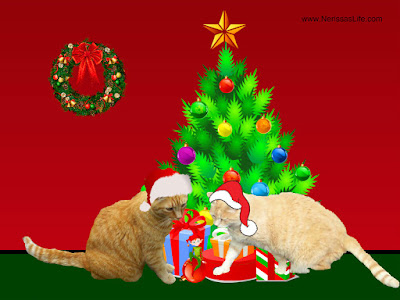 "WELL I CAN'T ALLOW THAT," stated Seville.  "Goodness knows what kinda dirt a spyin' elf could dig up if he were spyin' on me for an entire year.  It's bad enough you've been here for as long as you have!"  He turned to his sister, "Mason we're gonna have to find a way to get this elf back home."

"Speak for yourself, Sivvers," and Mason looked up from the paw she had been washing.  "Having an elf spy here for an entire year isn't going to bother me.  I don't get into mischief like you," she smirked.

"Besides," Mason continued.  "I don't think it's nearly as big a problem as the two of you think," and she went back to washing her paw.

Seville grabbed hold of Mason's shoulders and shook her.  "DID YOU NOT HEAR HIM?" he yelled.  "HE COULD BE STUCK HERE SPYIN' ON US FOR AN ENTIRE YEAR!"

Mason rolled her eyes.  "Seville, get a grip.  Tonight is Christmas Eve."

"That's right, I do," and Alfie vigorously nodded his head up and down in agreement.  "I have to get home by tonight, or I'm done for."

"WELL..." Mason said, clearly exasperated.  "Oh for goodness sake.  Do I have to spell it out for you?  BOYS."

"I'm a pretty good speller, Mason.  I don't need your help spelling anythin' for me."  Seville turned to the elf and made a motion with one of his front paws, indicating he thought Mason was a little loopy from imbibing in too much nip.

"For crying out loud.  AND CUT THAT OUT!" she yelled at Seville.  "I'm not the one who has already been into the Christmas nip.  That, Dear Brother, would be you."

"Now listen up, you two.  This is Christmas Eve.  Tonight, after all we cats are tucked into our beds, Santa is going to come here - TO OUR HOUSE - bringing..."

"Oh, he's bringin' us nip mice," Seville confided in Alfie.  "That's what we asked for this year.  Nip mice for everyone, and.."

"I SAID LISTEN UP!" Mason hollered.  "You know you can't listen and talk at the same time, Seville.  Now as I was saying, Santa will be coming here, to our house, tonight.  Here.  HERE.  To our house.  TONIGHT."

Seville looked down at a paw, then up at his sister.  "And your point would be?"

Mason closed her eyes and stomped her front paws.  "My point is, the shelf elf here, can hitch a ride home with Santa."

"Well why didn't you just say so in the first place?" Seville asked his sister.

Mason rolled her eyes.  "Boys," and she shook her head in dismay.  "Alfie, the Christmas tree is in the living room, and I'm pretty sure there's a plate of nip cookies already out for Santa.  Just sit next to the cookies, and Santa is bound to see you.  You'll be back at the North Pole by dawn."

"And uh..." Seville hesitated.  "When you do get back there...  There's no need to be tellin' Santa about anythin' naughty you might have witnessed me doin' while you were here, okay?" 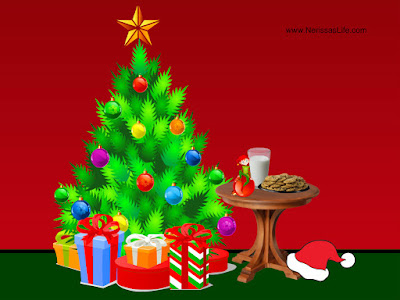 "Nothin'," Seville quickly answered.  "Nothin' at all.  Never you mind.  As far as you're concerned, you saw me doin' nothin' but bein' good, okay?"

"Er-hm..." and Mason whispered in her brother's ear.  "I do believe that bullying elves is considered Naughty List material." 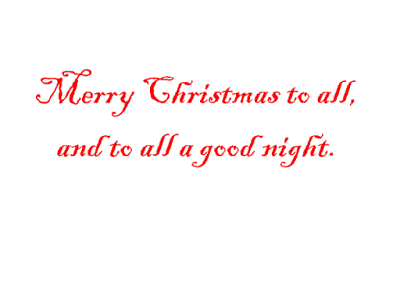 Posted by Seville at Nerissa's Life at 04:00