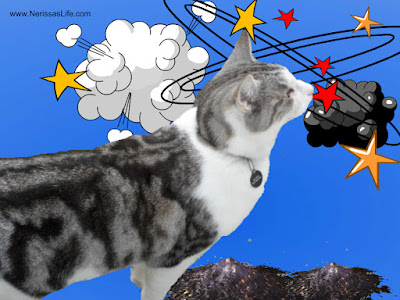 Previously on the Dash Kitten Blog...

OK Silver, pass me that screwdriver. You hold the whisk at an angle just, there and I...

Silver picked himself up off the ground, brushing soot and dust off his coat with a paw. Scrunching up his nose he asked, "Ewww...  What's that horrible smell?"

"That would be me," Seville answered very matter-of-factly.  "I think I singed a whisker in that there explosion.  Plus, I may have had a little accident.  You know, due to all the excitement and stuff."

Seville beckoned to his pal.  "Silver, come on over here and give me a paw, would ya?  BUT DON'T STEP IN THAT PUDDLE!  Like I said, I had a little accident."

Shaking his head, Silver carefully side-stepped the puddle on the floor, and approached Seville.  "What happened?"

Silver scratched behind an ear.  "I had kind of figured that bit out on my own there, Sivvers. Any idea why this something blew up?"

"Any idea where we are?"

Silver pawed his way over to an open window, peered outside, and murmured, "Well we're not in Kansas anymore buddy."

"We weren't in Kansas before, Silver, so that shouldn't come as a big surprise.  I think we're probably in Chicago.  You know, during the Prohibition Era.  After all, that is the time and place we were tryin' to get to when...  You know...  Everythin' blew up.  See if you can figure out the date from that calendar over there," and Seville pointed to a Gangster-of-the-Month calendar hanging on the wall. 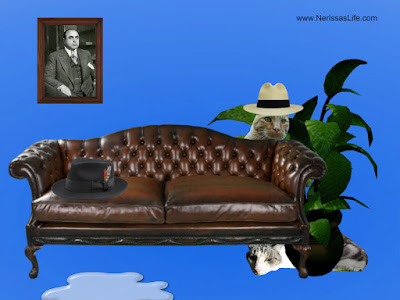 Both cats froze.  They could hear voices on the other side of the door.  Deep, unfriendly, sinister sounding voices.

"Quick!  Hide!!!" Seville hissed.  The two cats dove beneath and behind a leather couch on the far side of the room.

"Like I was sayin', he's swimming with the fishes right about now. What the...?  Did something die in here?  What's that godawful smell?"

Sensing Seville might answer the gangster who had walked through the door, Silver quickly placed a paw over his pal's mouth.

Seville looked down at his paws somewhat sheepishly.

After what seemed like an eternity, the two 1920's Chicago gangsters left the room.  The cats ventured out from their hiding places.

"Like I was trying to tell you before," Silver hissed, "I think this is the office of a real, live, 1920's Chicago gangster.  This is not a good place for us to stick around.  We need to teleport back to 2016, ASAP."

"Yeah, we're up a time stream without a whisk."

"But without any whisks..."

The two cats stared at one another in silence.

"That very well could have something to do with it," Seville nodded.  His eyes wandered up to the ceiling.  "Another possibility is that I might have accidentally dropped some crushed nip in the rubber compound I was using to coat the whisks.  I'm thinkin' the bits of nip might have interfered with the energy transfer, messin' up the time stream." 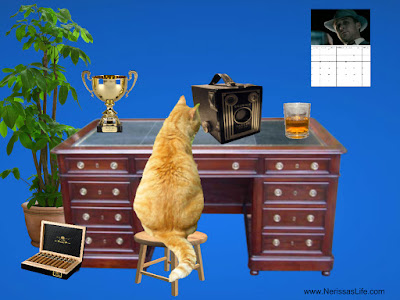 Silver slapped a paw to his forehead. "Sivvers! Remember what Savvy always says?  NEVER TELEPORT OR TIME TRAVEL WHILE NIPPED!"

"Now you remind me. OH MY MOUSES!" and Seville sunk to the floor in despair. "What is Savvy gonna say when she finds out we're trapped in 1920's Chicago?  We're in BIG trouble.  I'm NEVER gonna hear the end of this, for sure."

"Maybe she doesn't need to know," Silver suggested hopefully.  "Maybe we can get back to the present without Savvy ever finding out about what has happened here."

"Silver, we have no whisks.  We have NO WAY to get home.  We're stuck here.  Stuck here in 1920's Chicago.  Our ONLY HOPE of ever getting home is to contact Savvy.  We need her to mount a rescue.  But don't worry.  I HAVE A PLAN."

Be sure to tune in to Part 4 of the Prohibition Error, this Friday, on the Dash Kitten Blog.  purrs