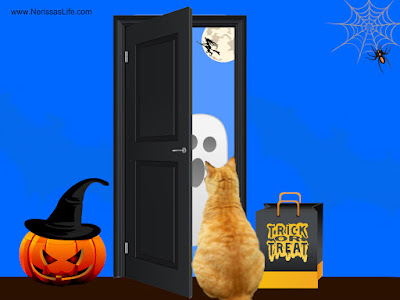 "I'm comin', I'm comin'. No need to get your knickers in a twist. MOUSES!"  Reaching the front door, Seville swung it open only to find a ghostly apparition hovering over the welcome mat.  "Hmmm... I'm bettin' you're not wearin' any knickers to twist.  Hehehehehee... What can I do you for? Hallowe'en isn't 'til tomorrow, you know."

Seville leaned forward until he was nose to nose - or whatever ghosts have in the middle of their faces - with the apparition, took a deep breath and yelled, "BOO!"  With a puff of smoke, the ghost vanished into thin air.  Seville smiled, congratulating himself on a job well done.  Then he closed the door.

"Who was that?" Seville's sister, Mason, asked.

"No one important.  Just some gho...  MOUSES!  Mason, it was a ghost.  A real live ghost was standin' out there at our front door."

With a loud sigh, Mason explained.  "If they're real ghosts, they've gotta be dead.  If they're alive, they're not real.  At least not real ghosts.  That was probably just some kid dressed up like a ghost for Hallowe'en."

"No way, sis," and Seville shook his head vehemently.  "Whoever that was, he was hoverin' like a ghost.  Hoverin'!  As in...  Like...  Like not touchin' the ground.  Kiddies dressed up for Hallowe'en can't do that.  Plus, when I yelled at him, he vanished into thin air.  Vanished!  He didn't run off or anythin' like that.  He just went poof!" and he snapped his claws together for emphasis.

"Then it must have been a real dead ghost I guess," and Mason grabbed another treat from the bag.  She popped it into her mouth, spun on her paws, and headed back into the kitchen.

"What's up?" Seville asked as he trotted around the corner.  He stopped dead in his tracks.  Hovering next to the kitchen table was a ghostly apparition.

"Told you there was a real live ghost at the door," Seville said smugly.  Mason raised an eyebrow.  "Fine.  A real live dead ghost, then.  Mouses."

Seville approached the ghost and tapped him on the shoulder, but his paw went right through the apparition without eliciting any response from the ghost.  "Why don't you take a load off there? Have a seat, why don't ya."

"On second thought, maybe you can't."  Seville peered under the ghost.  Where there should have been legs and feet, there was nothing at all.  "Hmmm...  I don't think you can sit without legs and feet.  I guess all you can do is that uh, hovering thing."

Seville sat back on his haunches to think.  He scratched behind an ear.  "How do you suppose he got in here?  I didn't invite him.  I told him to scat.  I even yelled Boo at him.  You know, to scare him off.  He must have rematerialised here in our kitchen after his little vanishing act at the front door.  Kind of rude, if you ask me.  A little presumptuous, too." 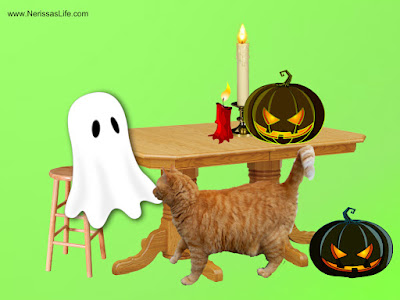 "And he doesn't have much of a vocabulary, either," Seville added.

Mason chewed at a claw. "I wonder why he's here. As you said earlier, he can't be trick-or-treating yet as Hallowe'en isn't until tomorrow.  Plus, he doesn't have anything like a bag, or a pumpkin, in which to collect his goodies.  There must be some rea..."

"BOO!" Seville yelled at the ghost, and once again, it vanished into thin air.

"What did you do that for?" asked Mason.

"Wanted to see if it would work again.  Apparently it did," and he smiled smugly.

"It didn't actually work the first time," Mason reminded her brother.  "He vanished from the front door only to reappear in the kitchen,"

"Oh yeah...  You suppose he's somewhere else in our house now?" Seville asked his sister.

"Only time will tell.  In the meantime, I'm going to grab another treat from that treat bag at the door. Once Anderson finds out the peep filled it with cat treats, there won't be any left."

"Yeah, and I'm gonna go work on today's blog post.  I wanna write about somethin' spooky as tomorrow is Hallowe'en,"  Seville sauntered into his office.  Moments later he cried, "MASON!  You had better get in here.  Quick!"

"Whatever is the matter?  Oh," and she stopped in her tracks.  "I see.  Your ghost friend has reappeared in your office."

"He's not exactly my friend," Seville scowled.  "But he's hoverin' over by my desk and by my computer.  MOUSES!  Plus, he appears to have turned it on.  As he has no feet. I'm assuming he has no hands, either.  Or paws for that matter.  How the mouses did he turn on the computer?"

"Probably some sort of manipulation of an electric field," Mason explained, very matter-of-factly.

"Hmmph!  Can't sit on a chair but can turn on my computer.  MOUSES!"  Seville approached his desk and peered at the computer screen, reading what was displayed before him.  "What the mouses?  This could totally ruin my reputation.  Totally.  TOTALLY.  Awww...  MOUSES!" and Seville swayed unsteadily, from side to side, before falling to the floor in a dead faint.

"Seville, are you okay?  Seville?  SEVILLE?"

Seville opened his eyes, fluttering his eyelashes.  "Is that you, sis?  Mason?"

Taking his paw in hers, Mason answered in soothing tones, "I'm right here, Seville.  What happened?  What scared you like that?"

"Read it for yourself," Seville sniffed, weakly pointing a paw toward the computer screen.  "READ IT AND WEEP!" he howled.

Mason's jaw dropped as she read the screen.

"Not know your own phone number?" questioned Mason.  "Seville...  You're right."

"I know I'm right!  Wait a minute.  Exactly what am I right about?" he asked his sister.

"That's not our phone number.  Let's see whose it is, shall we?" and Mason picked up the telephone and dialled the number in the ad.

Hello.  You have reached the Weasel Syndicate.  If you know the extension of the weasel you are calling, please dial now.  To speak to a customer service weasel, call back during our hours of operation: 9pm to 7am, Monday to Friday.  Thank you  for choosing the Weasel Syndicate for all your weaselly needs.

"There'll be plenty of time to deal with them later.  First, I think we need to deal with that other little problem on our paws.  You know...  Him," and Mason pointed toward the ghost still hovering by Seville's desk.

Seville approached the ghost.  "Excuse me my little ghostly friend.  I'm afraid that position has already been filled.  However, if I am to understand correctly, I believe there are several vacant positions available over at the Weasel Syndicate's head offices.  Let me get you their address."

"Don't you think you should explain to your little friend here about uh...  Well...  About what ghostwriters actually are?  What they do?" Mason hissed in Seville's ear.

"Nah," Seville hissed back.  "We'll let the weasels explain that." 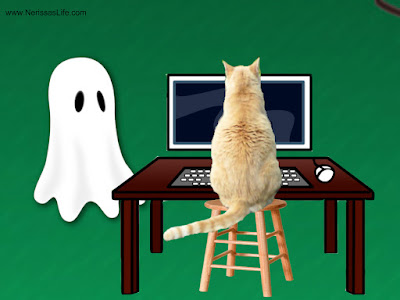 Seville presented the wannabe ghostwriter with the Weasel Syndicate's business address and public contact information, along with a list of the syndicate's Board of Directors, complete with their private e-mail addresses, home addresses and phone numbers.  After the ghost read everything, he turned to look at the cats. Seville was sure he noticed a nod of thanks, although truth be told, it's very difficult to tell if a ghost is nodding or not, as ghosts don't actually have necks with which to nod.  Moments later, the ghost vanished into thin air.

Feeling that the ghost was now gone for good, the two cats sighed big sighs of relief.  Mason headed to the front door to grab another cat treat from the bag of treats, while Seville settled in at his computer.  Resting an elbow on his desk he muttered to himself, "Now what on earth can I write about for Hallowe'en?  MOUSES!"

Posted by Seville at Nerissa's Life at 18:54