"Excuse me Peepers, you're in my spot."

That ever happen to you?  You ever have a peep occupy your spot?  Peeps are always tryin' to occupy cats' spots. MOUSES!

"Uh Peepers, in case you didn't realize it, you're still there.  In my spot.  You're still in my spot.  My spot.  MY spot, with the operative word bein' my.  MOUSES!"

It can be very difficult for a cat to get a peep to move from their spot.  It's not like we can pick 'em up and plunk 'em down on the floor.

And speaking of floors...

Have you ever noticed that even though peeps seem to think the floor is a perfectly acceptable place for a cat to sit upon, when a cat asks a peep to sit down there, they complain?  Ever notice that?  I have.

Now I have be honest.  Peep #1 has, in the past, sat on the floor in order to not disturb a sleepin' kitty but seriously, she hasn't done so nearly enough.  Not NEARLY enough.  Enough would be like...  Well...  Well...  Well like every time the situation arose.  So as I said, not nearly enough, for sure.  MOUSES!

The chesterfield in my family room seats three.  Two peeps and one cat.  Well technically, it can seat four if two cats are willin' to curl up instead of stretchin' themselves out.  Well technically, five. Yeah, the chesterfield will fit five if three of the five are cats.  Cats who are curled up AND if one of those cats happens to be my sister Tobias, on account of Toby bein' really small.  Smaller than your typical cat.  It will also seat five if at least one cat is willin' to sit on a peep's lap 'cause if cats are sittin' on laps, it frees up some space on the actual cushions.  Frees up some space for me.

The thing is, even though the chesterfield can, in fact, seat multiple cats, when I'm lyin' there, I like to get in a good stretch.  None of this curlin' up business for me!  I like to stretch out as far as I can stretch, and when doin' so, I alone occupy a good half of the couch.  At least half.  Maybe even two-thirds, as I have a very long tail, you see.  That leaves the other half - or third - for the peeps to share, and that works perfectly for me.  MOUSES!

But what does not work for me, is when I'm occupyin' my spot on the couch and Peep #1 decides to use me as a table.

Why just the other day, I was lyin' there on the chesterfield, mindin' my own business, while the peep was doin' some knittin'.  Then she decided that she had to take a peek at her pattern.  Well do you know where she put said pattern?  She put it on me!  Yup, right on top of me.  Like I was a kitchen table or somethin'!  MOUSES!

Next time she tries a stunt like that, I'm gonna tell her EXACTLY where to put her pattern, for sure.  MOUSES!

It is precisely because of behaviour such as this, that my brother Anderson's preferred spot on the chesterfield is at the far end, away from the peep's knittin'. 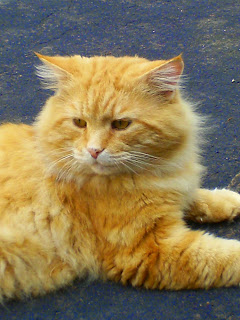 Of course, that rarely works out for him as it's Peep #2's preferred spot, too.

But the moment the end-of-the-chesterfield spot is freed up, Andy is in it in a flash.  You don't even see him goin' there.  You don't see him moving at all! One second he'll be lyin' next to Peep #1, sound asleep and purrin', and the next, he has fully occupied his very favourite spot.

Last night, Mason was on the chesterfield, all curled up, lyin' next to Peep #1.  Peep #2 was occupyin' Andy's favourite spot and  Andy realized that if he wanted to be on the couch, he'd have to curl up next to Mason.  So up he hopped before proceeding to lie down.

Now for the life of me I do not know why Andy did what he then went and did.  I do not know what in the world possessed him.  But right there and then, Andy decided to reach out and touch someone. Yup, he reached out a paw and touched my sister Mason.

Well that didn't go over too well.

Next thing we knew, there was a full-blown smacky paw session goin' on, right there in the middle of the couch.

To tell you the truth, I think my fur-sibs have been watchin' too many television shows with political pundits 'discussing' the upcoming election.  The pundits' behaviour is rubbin' off on them.  MOUSES!

But cats bein' cats, Mason and Andy had their little smacky paw take down, then when it was all over,  IT WAS ALL OVER, and they rolled over and went back to doin' what they had previously been doin'.

Well Mason did anyway.  She rolled over and went back to sleep.  Andy, however, ended up hoppin' down from the chesterfield to go sleep on the floor.  Apparently, neither peep wasn't willin' to give him their spot.  MOUSES!

And speakin' of rollin' over...

Yeah, it happens more often than you might think.  MOUSES!

I would love to see a peep roll off the chesterfield.

Why, I'd laugh so hard, I'd probably roll right off the chesterfield, too.  MOUSES!

Posted by Seville at Nerissa's Life at 19:13

Email ThisBlogThis!Share to TwitterShare to FacebookShare to Pinterest
Labels: cats, er-hmm, humor, humour, you're in my spot