Oh hello there.  I was just watchin' that ol' squirrel...

Well TECHNICALLY, I don't even know if he's a he.  He could be a she. Never asked him that, either, and to be perfectly honest, I can't really tell the difference.  I suppose other squirrels can tell though.  But that's neither here nor there, 'cause I'm a cat, and cats aren't squirrels.  MOUSES!

Hmmm...  I just had a thought.  I'll go out there and ask him his name.  That's a perfectly reasonable question to ask of a squirrel, and his answer will tell me if he's a boy or a girl.  Be right back.

So anyway, before I got all caught up with the business 'bout whether that squirrel was young or old, or a boy or a girl, I was watchin' him...  Her...  WHATEVER.  I was watchin' Ashley goin' about his or her business on that ol' oak tree at the end of my driveway, and...

And just to set your mind at ease, the oak tree most definitely is old.  No question 'bout that, for sure.

And by the way, Tess' tail is kinda old.  At least as old as her.

I don't think Ashley was growlin', though.  At least I didn't hear him.  Or her.  WHATEVER.

And as far as I could tell, unlike Tess, he wasn't flippin' his tail in the path of any unsuspectin' peeps, as there were no peeps up in that there tree.

Oh yeah, Tess does that, for sure.  I mean about the flippin' and floppin' of her tail in front of unsuspectin' peeps.  Peeps have to be on the constant look-out for Tess' tail, floppin' in front of them, on account of Tess not lookin' out for it, herself.

And why should she?  I mean, why should Tess have to watch, to make sure her tail doesn't get in the way of the peeps?  IT IS THE RESPONSIBILITY OF PEEPS to make sure they don't step on our tails, or any other part of us, for that matter.  It oughta be a law or somethin'.  Maybe it is. MOUSES! 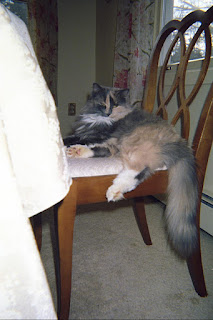 You know, once, not all that long ago, Peep #1 had a skid to a stop, jump, leap and stumble moment that almost included a somersault as its finale.  Luckily for the peep, a wall stopped her from somersaulting, 'cause let me tell you, that would not have had a happy ending.  I'm pretty sure my peep does not somersault well.  She might never get back up.  MOUSES!

Tess, of course, just sat there, flippin' her tail around, as if nothin' had happened.

And I suppose, for Tess, nothin' did.

By the way, turns out Peep #1 can growl just like Tess. Who knew?  MOUSES!

But back to that squirrel.

He was hangin' onto the tree, and doin' his tail dance moves, for the longest of times.  Never seen anythin' like it.   Have you?

Don't worry 'bout answerin'.  Whether you have or you haven't seen such a thing, I still think it's weird.  I mean, who dances with their tail, half-way up a tree?  Do you?

Uh never mind.  If you do, I really don't think I wanna know.  Some things are best kept private, for sure.  MOUSES!

You know, it was like that squirrel was doin' synchronised swimmin' or somethin', minus the swimmin' and minus the pool and minus the water, too, and...  Well pretty much minus everythin', but with the addition of a tree.  MOUSES!

Of course, that could be how squirrels do synchronised swimmin', I suppose.  Hmmm...

Anyone out there know of any synchronised swim teams involvin' squirrels?  MOUSES!

Personally, I've always found squirrels to be more into sports that involve the droppin' of acorns on the heads of unsuspectin' peeps.

Oh, squirrels would drop their acorns on us cats, too, but we're not unsuspectin' like the peeps, you see.  We cats know that if you give a squirrel an acorn and a target, that squirrel is gonna be doin' target practice, for sure.

I always find it smart to stand back as far as possible, when I see a squirrel holdin' an acorn in its paw.  Unfortunately, peeps aren't smart enough to realize this, which is why, my friends, Peep #1 has taken more than one acorn to the head.

You know, that could explain a lot of things...

What was I sayin'?

Oh yeah.  So there was this squirrel named Ashley, who might be a girl or might be a boy, might be old or young or somewhere in between, doin' a tail dance - which should never be confused with a pole dance 'cause it was a tree, and not a pole, and pole dancin' squirrels is wrong on so very many levels - on the ol' oak tree at the end of my driveway, and...

Come to think of it, for a squirrel, maybe that's not so weird after all.  I mean, squirrels do do weird things. IT'S A KNOWN FACT.  Squirrels can be crazy. Crazy as crazy can be.  There's a reason they say, crazier than a squirrel makin' nut pies kind of crazy, for sure.

And for all I know, Ashley might have just baked up a nut pie and was usin' that tail of hers to cool it off. You know, like a fan.  'Cause I'm pretty sure they don't have any fans in trees.  That would be kind of RIDICULOUS, don't you think?

Well at least there aren't any fans in the ol' oak tree at the end of my driveway.  I know I've never seen any up there.  Not even one.

On the other paw, I really don't think Ashley was bakin' any pies.  I mean, I did go out there to ask him or her, his or her name, right?  Had there been a freshly baked nut pie sittin' out on a tree branch or somethin', I think I would have noticed that, for sure.  MOUSES!

Posted by Seville at Nerissa's Life at 20:06