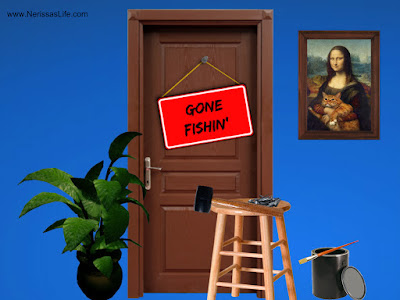 "Done."  Seville sat back on his haunches to admire his handiwork. "And it looks pretty darned good, too, if I do say so myself.  In fact, it looks PURRfect, for sure," he chuckled.

"You spelt fishing wrong," a voice behind him said.

"Suit yourself," Tess shrugged, "but I think there's supposed to be a letter 'g' somewhere in there."

Seville scowled at his sister.  "That's 'cause you're not sayin' it right.  MOUSES!"

Tess skulked off down the hallway, growling and flicking her tail, this way and that, as she went. Moments later, one of Seville's other sisters, Mason, appeared.

"You're going fishing?" Mason asked.  "May I come?  I've always wanted to go fishing but no one has ever invited me.  I don't suppose you'd like to?  To invite me on your fishing trip, I mean."

"Sorry sis but there's only room for the three of us in the teleportation device, what with the fishing gear and stuff.  Plus, I need to save some room for Nellie, in case she feels like fishing, too."

"The three of you?  And Nellie?  You're taking half the feline household fishing and possibly a guest and you're leaving ME behind?  You have a lot of nerve there, Seville.  Who are you taking? Rushton and Anderson?"

"Are you kidding me?"  Seville rolled his eyes back so far into his head he thought they might never come back out again.  "Can you really see Andy fishing?  You're supposed to be quiet when you go fishing, so that you don't scare off all the fish.  Andy has never been quiet in his life!  I don't think he even knows how.  MOUSES!"

"Then who are you taking?" and Mason gave him a look that could topple a brick building, while impatiently tapping a back paw on the floor.

"The stuffies," answered Seville.  "Well...  the one regular stuffy and the other one is a pin stuffy but they're both stuffies, really.  You know the stuffies.  You saw 'em when they arrived.  Those two adorable little stuffies that are oh-so-cute and very, very handsome.  They look just like me.  The stuffies Nellie's mum made.  You know Nellie.  Nellie from the wonderful and always oh-so-interestin' and always entertainin' and really, really fun blog, Living on the Edge.  Sevilles number two and three." 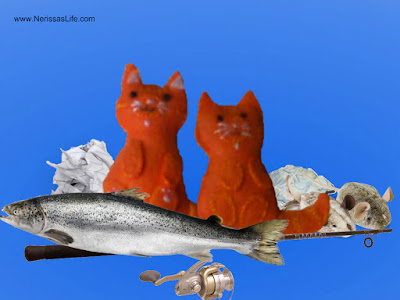 "You went number two, Seville?" Anderson asked as he passed the other two cats in the hallway. "Hope you did it in the litter box!  Haha... Haha... HAHA..." he guffawed before stopping in his tracks.

"Uh, I know what number one and number two are but what's number three? Never mind.  I don't think I want to know.  I think number three might be like that time when I got into the cream and my lactose intolerance got the best of me and..."  Without finishing his sentence, Andy darted down the hallway, disappearing into the bathroom and the nearest box.

"Anyway..." Seville continued.  "Like I was saying, I'm taking Seville number two and Seville number three fishing, out on the west coast. Gonna catch us some wild pacific salmon like those freeze-dried Wild Pacific Salmon treats Nellie sent me, along with the two stuffies her mum made. Gosh those treats were yummy.  Scrumshidumshilicious, in fact.  Sometimes, at night, I close my eyes and dream of those delicious Wild Pacific Salmon treats.  Mmmm...."

Now it was Mason's turn to roll her eyes.  "You and your snacks.  Boys!"  And with that, she was off down the hallway, making sure to hold her breath as she passed the bathroom where Anderson was busily covering up something unmentionable, in the litter box.

"Now, time to pack up the teleportation device," Seville declared.

"Fishing gear...   Hmmm...  I wonder what kind of bait I need to catch salmon treats.  And can I fish for the packages of treats themselves, or should I be catching live salmon?  And if I catch live salmon, should I bring along somethin' to freeze dry 'em right there, on the spot?   All very good questions, for sure.  I bet Nellie will know the answers.  After all, she knew 'bout those delicious treats in the first place.  I'll take a fishin' rod and ask Nellie 'bout bait when I get there.  And I think the peep has a dehydrator or somethin', somewhere around here.  Bet it's in the basement. MOUSES!"

After packing up the teleportation device, Seville went off in search of Seville numbers two and three, who had disappeared under the chesterfield, after being offended by Anderson's bathroom comments.

"Don't worry 'bout what Andy said," Seville comforted the two stuffies.  "Andy doesn't have a clue what he's talkin' about...  AS USUAL.  MOUSES!" 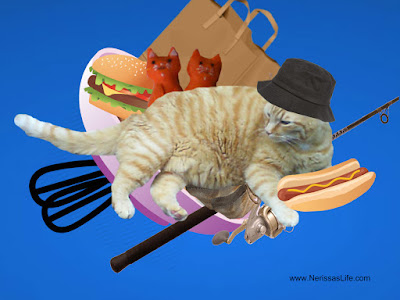 Finally, with the teleportation device fully loaded, and all three Sevilles ready for their long trip out to the west coast, Seville set the coordinates for Nellie's house.  He then fired up the eggbeaters that would power his flying frying pan using eggbeater teleportation technology.

"Hang on tight!" Seville instructed the two stuffies.  "We'll be at Nellie's in about two shakes of a whisker. Maybe three, with this headwind we've encountered.  'Bout five minutes, I suspect.  Good thing I brought along some snacks," and he dug into the bag with the fishing gear, looking for the snacks he had packed. "When teleportin', always be prepared with snacks," he told the two stuffies, knowingly, as the three soared across Lake Ontario.  "Never leave home without your snacks.  Never.  Not ever. MOUSES!"

Posted by Seville at Nerissa's Life at 17:43