and your point is? 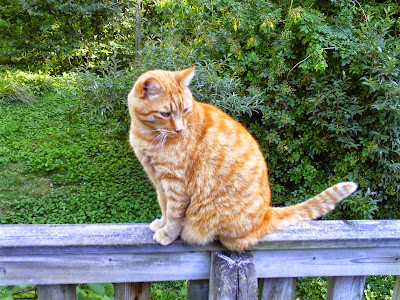 And your point is?

Mouses woman.  Can't a cat cough up a little hairball in peace?

So anyway, does my tail look fat to you, Peepers? You think I should lose an ounce or two?

No Peepers, it was what one calls a rhetorical question.

What do you mean you already know what rhetorical means?   Then why did you ask...?

Oh.  You were askin' how I knew what rhetorical meant.  Well, I know 'cause...

Mouses woman, of course I know!  I am a highly intelligent bloggin' kitty, after all.

In fact, I know lots of stuff.  I know lots and lots of stuff, to be sure.  Truth be told, I know stuff 'bout you.  Stuff you might not want spread all 'round the Internet, if you know what I mean.

So you might wanna quit with the insults while you're ahead.  MOUSES!

But back to my tail.

Actually, I think my tail is pretty much perfect.  Good thing, too, 'cause I really didn't want to consider goin' on a diet or anythin' like that.  We all know how much I enjoy my snacks.  MOUSES!

NO, I did not cough up that hairball 'cause of an eating disorder.  MOUSES!

Besides, it was only a little hairball.  Guess you've been combing my fur pretty well, as of late.  I'll give you that, Peepers.

Actually, you've been doin' a far better job of combin' my fur than you have of some other things.

I was just gonna tell everyone how for two days in a row, you plugged the toaster in, instead of the coffee maker, and then wondered why the coffee maker didn't make you any coffee.  Thing is, Peepers, the coffee maker runs on what we call ELECTRICITY, so if you don't plug it in, it doesn't work.  Not even if you turn it on.  It's really very simple.  Don't know why you didn't know 'bout that before. 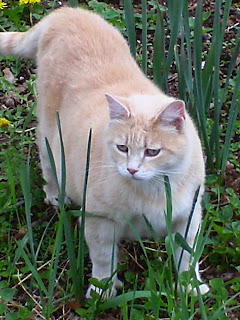 What's that, Peepers?  WHAT?  MOUSES!

OH PUH-LEASE.  If I was gonna tell the world your most secret of secrets, I'd tell 'em better secrets than that.

Turns out I have a secret or two, too.  Secrets I might not want told.  And the peep knows all about 'em, for sure.  MOUSES!

BUT I REALLY WAS thinking 'bout developin' a bit of an exercise routine.  One for cats.  One for cats who think their tails might be lookin' a little...  You know... Fluffy.

Anyway, I heard on the television this mornin', how some peeps were exercising usin' some sort of combat sport kind of thing.  I wasn't payin' too much attention as at the time, I was enjoyin' a snack, so I'm really not sure what it was all about.  But combat sportin' sounds a lot like smacky paws to me.

So I thought about it for all of thirty seconds, and then I remembered the last time I got into the smacky paws with my sister, Mason.  And then I thought better of that.

A girl with a mean left hook and an even meaner right one.  MOUSES!

So then I thought about doin' a variation on the whole Pokemon thing.  I know, I know...  Pokemon.

But my version doesn't require a smart phone or an app or anythin' like that.

In my version, you find a crowd of peeps, pick out the meanest, ugliest, toughest lookin' one in the group, POKE HIM, hurl out an insult or two, and then run.  Run really, really fast.  Faster than you've ever run before.  MOUSES!

That should burn off a calorie or two.  Enough to make a tail look a little less fluffy, if you know what I mean.

But since we cats aren't allowed out on the streets, cavorting with mean, ugly, tough-lookin' strangers, I thought better of that, too.

But I scratched that idea as well.  Sounded too dangerous to me.

Then..   Then I came up with the PERFECT idea. 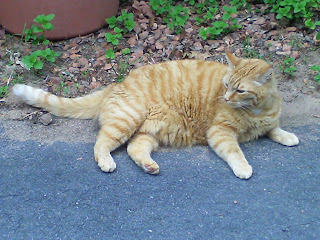 Go into the family room and find my sister Mason.  Poke HER.  Tell her her grandma wears combat boots and then run like the dickens.  Run faster than the dickens.  Run faster than Charles Dickens ever ran!  Run faster than Charles Dickens ever dreamt of running 'cause truth be told, I actually don't know if Charles Dickens was a fast runner.  He might have been, but then he might not.  But I'm willin' to bet that at times, he dreamt of running really fast.  And I can ASSURE you, had he had my sister Mason on his tail, after he had implied Mason's grandma was workin' out of a cathouse or somethin', he would have been dreamin' of runnin' really fast.  Really, REALLY fast, for sure. 'Cause in case you didn't hear me before, Mason has the meanest left hook, ever, and an equally mean right one, to boot.

You don't ever wanna do the smacky paws with Mason and that, my friends, is for sure.  MOUSES!

Posted by Seville at Nerissa's Life at 19:19