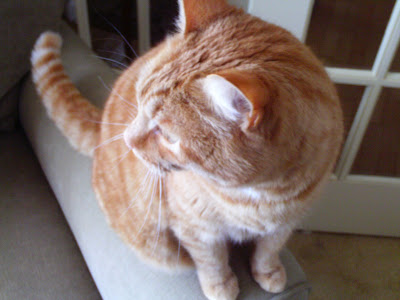 Who am I kidding?  ALL nip mice are good. MOUSES!

Well maybe not a nip mouse a fur-sib has slobbered all over.  Heck, I'm not even partial to nip mice I've slobbered all over, never mind someone else.  Always best to let your nip mice dry out between slobberings, I should think. MOUSES!

But back to the topic on paw.  I think I'll curl up with an unslobbered upon nip mouse and have a little nap in the living room this afternoon.  Ah yes, that sounds just about perf...

Peepers, what is the meaning of this?  Why is this living room door closed?  I banged into the closed door, bumping my head and everything.  Ouch, that hurt.  What is this insanity that is before me?  MOUSES!

As you may remember, my last blog post was about how unfair it was that whenever I get into mischief, I get caught on account of the shedding of my gorgeous ginger fur even though my two long-haired marmie brothers get away with almost everything on account of their lack of shedding of fur.  It's true, I shed you not.  Yeah, I wrote all about it on Sunday and entitled the post, "I shed you not," and everything.  MOUSES!

Anyway, as unfair as that may sound - AND IS, something even more unfair has happened and yes, this additional unfairness with which I have been plagued is due to a long-haired marmie feline brother, too.    Like I said earlier, way to go, bro.  MOUSES!

Truth be told, the living room is often off limits to us cats on account of...  well...  scratching and stuff but this year, we've had FREE ACCESS since before Christmas.  It's true!  Both living room doors have been left open since the Christmas tree went up in December and closed only briefly on Christmas Eve so that Santa could leave our prezzies without any of us getting in there and opening them all up before Christmas morning - which, by the way, is something most all of us would have done, given the chance. The Christmas tree is still...

Oh yeah, did I not mention that?  The Christmas tree is still up.  January 27th and it's still up.  Can you believe it?  Peep #1 said something about trying to get it down by Valentine's so she still has another couple of weeks.  MOUSES!

Anyway, like I was saying, we cats have had free access to the living room since before Christmas and let me tell you, we've been enjoying it a lot.  Until today.  Until today when Andy got caught scratching on the furniture and the doors were shut up tight.  Well tightly, but you get the picture, I am sure.  And, of course, that was why I bumped my head on one of those closed doors.  I never expected it to be closed or anything.  Why, it's been open since before Christmas!  MOUSES!

You know, just because you're a long-haired marmalade cat who can almost always get away with mischief-making on account of not leaving any evidence in the form of fur that has been shed because for some weird and wacky reason your fur never sheds, it doesn't mean you don't have to be careful.  It doesn't mean you can get all wild and willy and go on a furniture-scratching crime spree.  You still have to be careful not to actually be caught in the act of doing said mischief. Peeps don't need to look for trace evidence if you're caught in the act.  Peeps around here think nothing of using eye-witness testimony, especially when the eye witness testimony is coming from the peeps.  MOUSES!

And now, all because Anderson wasn't careful enough not to be caught committing his crimes, we're all locked out of the living room.  He did the crime and WE'RE ALL doing the time.

We will not, however, be doing said time in the living room.

Had that been the case, I wouldn't have minded one bit.  'Cept, of course, for this bump on my forehead on account of my slamming into that closed living room door.  Yeah, that's gonna leave a mark, for sure.  Luckily for me, my lovely short ginger fur covers it up quite
nicely.  MOUSES!

Posted by Seville at Nerissa's Life at 19:23