and the seven cats 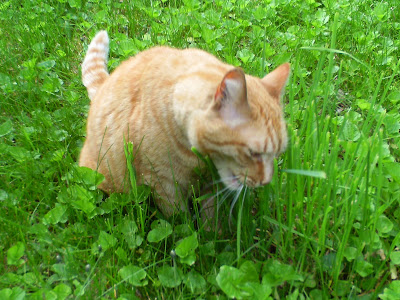 So I was hanging with the peeps the other night, discussing the events of the day and stuff when Peep #1 said something about the number seven. I think it had to do with the number of days in the week but to be perfectly honest, I wasn't paying a whole lot of attention to her at the time so really, she could have been talking about anything.

Of course, the peeps had no idea of what I was talking about on account of our conversation having been related to politics, the price of nip and, I think, the number of days in the week.  Peeps didn't know I had been simultaneously having another conversation in my head.  A private little conversation with only me, myself and I.  And that Snow White gal.  And maybe her pals, the seven dwarfs.  MOUSES!

Anyway, the peeps looked kind of dazed after I blurted out what I blurted.  Dazed is a look they so often do.  To tell you the truth, I sometimes wonder if Peep #1 made a dazed-looking face once as a child and the look just kind of stuck there on her face for eternity.  MOUSES!

But back to those dwarfs and that gal named Snow White.  I thought to myself, if I were to make Peep #1 Snow White, we cats would be the seven...  Hmmm...  Well, we'd be the seven cats because you know, cats are what we are.  But what would be our names?

I, of course, would be Doc.  Doc was in charge, I do believe.  Makes sense that Doc is whom I should be.

Also, Doc is short for Doctor and that Doctor on TV whose real name no one knows is into time travel just like me, although he uses a telephone box whereas I use a far more efficient means... whisks.  Only problem with whisks is that they're sometimes in short supply on account of that nasty ol' Weasel Syndicate trying to monopolize the market, thereby enabling them to fix the price of whisks in an oh-so-weasely way but I must leave that discussion for another blog post on another day.  Might want to leave it for another sentence, too.  Got a pretty long one there, for sure. MOUSES!

Now back to those dwarfs.  I mean, cats. 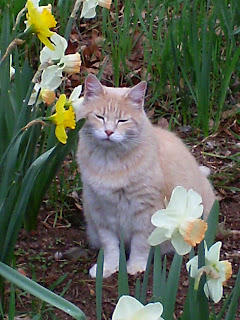 Tess?  Well that's obvious.  Tess would be Grumpy. Tess is grumpy.  Oh yeah, Tess is a Grumpy Gus, to be sure.  She's always growling up a storm.  In fact, she growls at storms.  It's true!  That girl growls at the weather and everything.  MOUSES!

Clearly, Mason would be Happy as Mason has the loudest purr on the face of the earth.  Now you might think I'm exaggerating about that but seriously, there are jet airplanes that make less noise than my sister, Mason, when she purrs.  Jet airplanes capable of breaking the sound barrier.  I know.  I've run tests and everything.  MOUSES!

Bashful?  My brother Rushton, of course.  Rushy is a shy boy at heart.  Sweet face and kind soul but seriously, he runs from his own shadow.  His shadow, loud noises and anyone he hasn't already met.  I know, not quite the definition of bashful but it's close enough.

That leaves Sleepy and Dopey.  Hmmm...

Okay, I'm thinking Anderson could go either way.  He does like his sleep.  And as far as the other...

What's that Peepers?  FINE.  I have been informed that it's not nice of me to call my brother a dope.  MOUSES!

Oh Peepers, how about a niphead?

Doesn't matter though because I have a far better name for Andy.  We shall dub him, Fartsy.  He didn't get the title Sir Fartsalot for nothing, you know.  MOUSES!

And as for Connie, I'm thinking Hopsy.  She's still hopping around the place on three legs, dragging her fourth leg in that cast around, behind her.  Hopalong Cassidy had nothing on her.  Seriously, I'm not sure Hopalong Cassidy even hopped!  And if not Hopsy, Tipsy.  After all, her balance on three legs and one cast really isn't the best.

And speaking of being tipsy, let's talk about Nipsy. Any one of my fur-sibs could be called Nipsy.  After all, it is on the nip that we get nipped although I'm thinking that calling them Nipsy is kind of like calling them nipheads.  But cats and peeps alike, who all dearly loved my brother Nissy, called Nissy that all the time and they did it with lots of love and the very best of intentions.  Why, Peep #1 called him her little nipster and everything!

The real problem with nip-related names, I do believe, is that at my house, they're rather non-specific.   Basically it would be like naming us all Cat. We're all into the nip, you see.  If Peep #1 were to go around calling Nipsy, we'd all come running, for sure.  After all, the peep might have some nip on paw and none of us would want to miss out on that.  MOUSES!

Oh Peepers...  You have any Snow White attire on paw?  If we're going to pull off this Snow White and the Seven Cats thing, you need to look the part.  What's that?  You think what?  MOUSES!

Peep #1 doesn't know what's good for her.  Luckily, I do.  I'll just borrow her plastic card thing-a-ma-gig and order her up a costume - I mean, dress.  Oohhh...  Maybe she could wear it for Hallowe'en. What a plan.  That's a great plan, for sure.  MOUSES!