and now, the conclusion 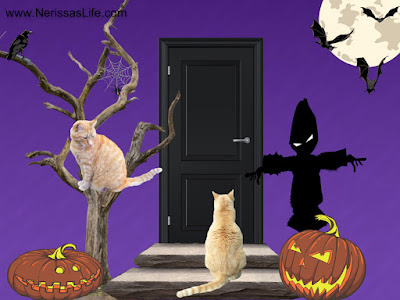 Previously on Nerissa's Life...  The door swung open with a loud creak. From what the cats could see, there was no one on the other side.  At that very moment, a streak of lightening lit up the evening sky and a loud piercing scream could be heard, emanating from within the house.

"OH MY MOUSES!" Seville screeched, leaping straight up into the air and landing on the branch of a nearby tree. "Don't just stand there, Mason.  Take cover!"

Mason stood motionless by the door, seemingly frozen in terror.  Seville knew he couldn't leave his sister alone to fend off whatever horrible beasts might be in the house.  He jumped down next to her.  "Mason," he hissed, "you were right.  We can let Peep #1 pick up my October whisk in the morning.  Come on;  let's go."

"GHOSTS!  You think there are ghosts in that there house?  I thought it was merely some horribly scary monster with a sore throat.  Ghosts are way worse than monsters, Mason.  COME ON... Let's go," and Seville tugged on Mason's paw.

"Seville," Mason turned to her brother, "did that screech not sound familiar to you?"

Seville thought about it for a minute before snapping his claws.  "Of course!  Sounded just like the peep when she practices her caterwauling.  Awww...  silly me.  Nothing scary about the peep caterwauling."

"Really?" and Mason raised an eyebrow.

"Okay, let me rephrase that.  The peep's caterwauling is very scary but not in a ghostly or monsterly kind of way.  Totally different kind of scary, for sure."

Mason nodded in agreement.  "Come on Seville.  Let's check out this house and pick up your whisk."

The two cats entered the house, gingerly.  With each step, floorboards moaned and creaked.  "You think the peep is here?" Seville whispered.  "Here in this house, caterwauling?"

Another loud scream tore through the air and the cats froze, too scared to even breath.  After a minute or two, Mason extricated Seville's claws from her fur and Seville gasped for air.  "Sounds like the peep is that way," Mason said, pointing down a long hallway.  "But what I don't understand is why Peep #1 is even here in the first place.  It doesn't make sense at all."

"Could she be in some kind of trouble?" asked Seville.  "Could the Whisk-of-the-Month Club people have kidnapped her or something?"

"Actually, I'm beginning to question the legitimacy of this whole Whisk-of-the-Month Club, Seville.  I mean, what kind of outfit operates a business from a place like this?"

The chandelier hanging from the ceiling began to sputter and within moments, the room in which they stood was thrown into complete darkness.  Moments later, lightening flashed outside and lit the evening sky.  Light poured into the house and for a very brief moment, Seville was sure he saw movement ahead.  "Over there!  Could that be the peep?"  But the light from the electrical storm lasted only moments and the house became dark, once more.

Suddenly, two by two, candles hanging on the walls of the looming hallway flickered to life.  "Looks like we're supposed to go that way," Mason whispered.  "I think we're supposed to follow the lights," and she took a step forward.

Seville grabbed his sister by the tail.  "Mason, there's no one lighting those candles."

Mason shrugged.  "I'm sure there's a reasonable explanation for that.

"Well I'm sure there isn't."  Feeling a tap on his right shoulder, Seville spun around, ready to chastise Mason for trying to scare him.  "Don't do..." he began, before realizing that moments before, Mason had been standing in front of him.  "Uh Mason..."

But now, Mason was nowhere to be seen.

As if on cue, a ghostly apparition appeared before Seville,  It hovered for a few minutes, its glowing, piercing eyes staring right at him.  Staring at him and through him, both at the same time.  And then as suddenly as it had appeared, the apparition vanished.

On Seville's left, a door creaked open and Mason appeared.  Seville grabbed his sister and hugged her tightly.  "What happened to you?  Are you okay?" he asked.

"Get off me, Seville," and Mason pushed away her brother.  "I had to use the litter box.  Give a girl a little privacy, huh?  MOUSES!"

Seville glanced up at the door through which Mason had exited and sure enough, there was a little plaque depicting a girl cat and a litter box.

"Okay..." Seville began, "but Mason, you'll never guess what I just saw.  It was kind of white, transparent and able to float."

"Seville, there are no such things as ghosts," Mason scoffed.

A loud scream pieced the air once more.  Louder now and even more unearthly sounding than before.

"Come on," and Mason tugged at Seville's fur.  "We need to find out what is at the end of this hall."

Seville dug his claws into the floorboards, refusing to budge.  Mason tugged at him, only causing Seville to dig his claws in, further.  Putting all her weight behind her efforts, with one final tug, she pulled Seville free.  Together, they catapulted forward and did so with such momentum that the two cats landed hard against the door at the end of the hallway.  The door flew open, causing Mason and Seville to stumble into the room. 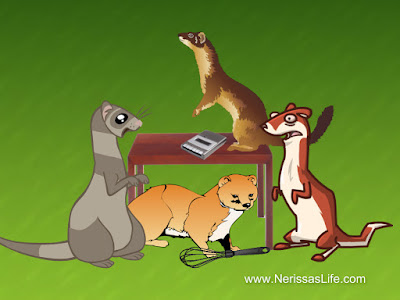 There before them stood a small table with an old-fashioned tape recorder lying on it.  Surrounding the table, several weasels were rolling around on the floor in fits of laughter. "This is too funny!" and "Did you see the looks on the cats' faces?" they squealed with delight.

"WEASELS!" Mason hollered, placing her front paws on her hips.

The weasels continued to roll around on the floor, laughing uncontrollably.  "This is the best Hallowe'en prank ever," one of them declared.

Seville felt the fur on his tail starting to puff in anger.  "Why you..." he began to growl.

"Oh come now," and one of the weasels climbed to his feet.  "You've got to admit it, Seville.  This was good."

"I'll admit to nothing," declared Seville.  "Nothing at all."

Mason pawed her way over to the table and clicked the play button on the tape recorder.  Sure enough, the sound of Peep #1 caterwauling echoed throughout the room.  "You got the peep on tape," she murmured before asking, "How did you get the candles in the hallway to light themselves so mysteriously?"

"They might look like real candles," one weasel answered, "but actually, they're electric.  I just flicked a switch from in here."

"What about the ghost I saw?" asked Seville.  "How did you manage that?  How did you get him to float around like that?  Some sort of hologram or something?"

"Yeah, the ghost that appeared before me in the hallway when Mason was using the litter box," answered Seville.

Mason's admonishment of Seville was cut short by one weasel as he said, "Cat, we didn't have any ghost effects.  We didn't, did we?" he asked the other weasels with a little less assuredness.  The weasels all shook their heads.

"But I..." and Seville turned to point down the hallway where the ghost had appeared before him.

At that very moment, the ghostly apparition appeared once more.  It hovered in the hallway, a foot or so off the ground.  The weasels' eyes grew large with fear as did the cats'.

"A GHOST!" screamed one of the weasels.

"It's real!" yelled another.

"It's approaching!" hollered a third.

"Oh no you don't," and Mason wagged a claw at the weasels.  "You're not tricking us again." Turning to Seville Mason said,  "We're not falling for that, are we Seville."

But all Mason could see of Seville was the tip of his tail as he fled through an open window. Another flash of lightening lit up the evening air and Mason could see the weasels out in front of Seville, running as quickly as their little weaselly paws would carry them.  She looked back at the ghost and saw that it was, in fact, approaching.

"WAIT FOR ME!" Mason yelled, before jumping through the window and tearing after her brother.

Once caught up with Seville and at a safe distance from the house, Mason and her brother stopped and looked back.  Light now poured through all its windows.  From one window, several ghostly apparitions could be seen.  They appeared to be saying something.  The cats turned their ears to listen carefully.  Carried over the cold, misty air, Seville and Mason were sure they heard a ghostly cry of... 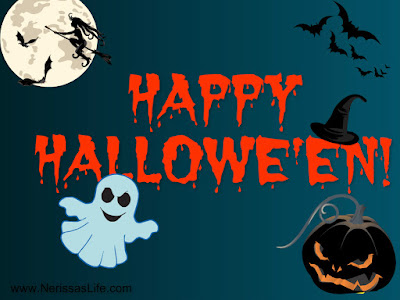 Posted by Seville at Nerissa's Life at 14:06