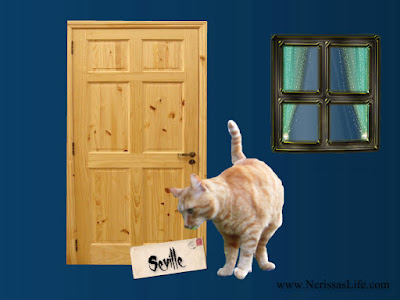 On his way into the kitchen for a snack, Seville noticed an envelope lying on the floor by the front door. "Better tell the peep she dropped her mail," he muttered.  "Imagine getting a letter from someone and dropping it like that.  Peeps can be so careless.  MOUSES!"

Seville stopped in his tracks.  "On second thought, maybe I'll take it in to her.  Might get me some of the really good treats if I do that.  The ones that are extra yummy."

But as he picked up the letter with his teeth, Seville noticed it wasn't addressed to Peep #1 after all. Nor was it addressed to Peep #2.  "Oh my mouses!" he cried.  "This letter is for me.  I wonder when the postman started delivering mail to our front door.  We've never had door-to-door delivery before."

Moments later, Seville had the envelope open and was reading its contents.  He then dashed into the family room, jumped up onto Peep #1's lap and smothered her with thank you nose kisses and head bonks.  Without waiting for her reply, he ran upstairs to find Mason and tell her the good news.

"Mason!" Seville cried.  "You'll never believe what the peep has done.  She signed me up for the Whisk-of-the-Month Club.  Can you believe it?  This is wonderful!  The Whisk-of-the-Month Club is the most elite club in the entire country.  I've wanted to join ever since I found out about it.  Oh my gosh, Mason.  Our peep is the best peep in the whole wide..."

"And you've known about this club for a long time?  You say you've always wanted to join?" Mason asked.

"YES!  Ever since I found out about it about five minutes ago.  You know, when I started reading the letter from them.  At that very moment, I wanted to join the Whisk-of-the-Month Club, for sure. By the time I finished reading the rest of the letter, I realized the peep had signed me up.  This is the best!"

Mason rolled her eyes.  "You only found out about it five minutes ago?  Mouses, Seville.  I thought you said it was the most elite club in Canada.  If it's so elite, how come you had never heard of it before?"

"I don't know..." and Seville hesitated.  "I guess it's kind of a secret elite club or something.  But it says right here in the letter that it's elite."  He laid the letter down in front of Mason, carefully smoothing out any creases.  "See?  Elite.  Most elite club in Canada.  That's exactly what it says."

Mason studied the letter.  "Hmmm...  It also says you have to pick up the whisks yourself.  And that your October whisk is waiting to be picked up at 3645 Hemlock Street," Mason pointed out with a paw.  "If this Whisk-of-the-Month Club is so elite, why don't they deliver their whisks right to the door?"

"I don't know," shrugged Seville.  "Must be having delivery problems or something.  But you're right; it does say my October whisk is ready for pick-up today so I'm off to go get it.  Wanna come with?"

"Suit yourself," and Seville turned to leave the room.

Mason thought for a moment.  "Hold on there, Seville.  Maybe I should go with you.  It could be a trap of some sort."

"A trap?" scoffed Seville.  "Why on earth would the Whisk-of-the-Month Club want to trap me.  MOUSES!"

Seville whispered, "Gosh, these Whisk-of-the-Month peeps sure do go all out for Hallowe'en, huh? They must have the best decorated house in the whole neighbourhood."

Mason glanced around.  "Only house in the neighbourhood, from the looks of it.  And let's just hope it is decorated for Hallowe'en because if not..."  She shuddered to herself.  "Actually, I don't want to even think about the if not part."

The two cats began walking up the path leading to the front door.  As they approached, a swarm of rats scurried past.  "I wonder what has them spooked," Seville thought aloud.

Mason grabbed her brother by the paw.  "Seville, are you sure you need to pick up this October whisk of yours?  I'm really getting a bad feeling about this place.  It's kind of... spooky, to say the least."

"You worry way too much, Mason.  It's just an old house all done up for Hallowe'en.  Some might even call it..."

"Nope, I don't think anyone would ever call it a duck.  I was thinking more along the lines of..."

"No, duck, Seville," and Mason pushed her brother to the ground moments before several bats flying above suddenly dove right at them.  "Whew, that was a close call." 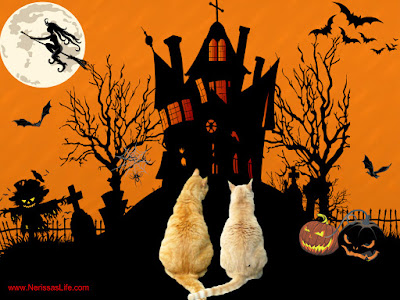 "Seriously, Seville.  I think we should turn right around and go straight back home.  Peep #1 can pick up your whisk in the morning.  When there's more light.  And no bats and stuff," she added quietly.

"Come on Mason," Seville encouraged. Stepping behind her, he pushed his sister toward the house.  "This won't take long."

When the two cats finally arrived at the front door, Seville grabbed the large, rusty old door knocker and rapped three times but his knocking was met with silence.  He knocked once more.  This time, the door swung open with a loud creak.  From what the cats could see, there was no one on the other side.

At that very moment, a streak of lightening lit up the evening sky and a loud piercing scream could be heard, emanating from within the house.