cat on a hot tin roof 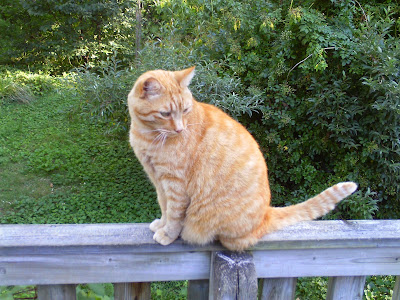 It was just like that play. That play, Cat on a Hot Tin Roof.  Just like it except, of course, for the roof not being made out of tin.  And for it not being hot, either, on account of it being midnight and all and the sun having set, hours before.

Picture it...  My front yard.  Midnight.  Two nights ago.

"Seville, it's time to come in," I heard Peep #1 calling in a low voice.  She was speaking softly on account of it being midnight when most of the neighbours would be sound asleep and not wanting to be awakened by her caterwauling and such.

Now I should clarify something here.  I should clarify that the peep's midnight-calling-of-cats caterwauling is different from when she goes to her caterwauling practises.  Different but not by much.  Both are equally obnoxious and unwanted but the caterwauling practises are set to music whereas when the peep is calling a wayward kitty in at night, there's no music.  No music except for the chirping of crickets and even they tend to stop when they hear her on account of their having to cover their ears with their feet, preventing their legs from doing whatever their legs do to make those chirping noises.  MOUSES!

But as I was saying, the peep was calling for me to come inside the other night and it was midnight. I heard the peep calling and I cried back, "Meow."

The peep called me again.  "Seville, where are you?  Time to come in."

"Seville..." she cried in what could only be described as a stage whisper.  "Time to come in.  Where are you?"

Once more I said, "Meow," and the third time was the charm for it was on this third 'meow' that the peep looked up.  She looked way, way up and there I was.  There I was up on the hot tin roof that was neither hot nor tin.  MOUSES!

"Seville, what are you doing up there?" Peep #1 asked.

"Oh just hanging about, twiddling my thumbs and watching that old streetcar named Desire off in the distance, Peepers.  WHAT DO YOU THINK I'M DOING?  I'm stuck.  Stuck up here on this hot tin roof.  Want to help me down?"

Then, being the peep that she is, the peep asked, "Why didn't you tell me you were up there in the first place?"

Sometimes I wonder about my peep.  Everyone does.  At least I'm assuming the neighbours wonder about her.  Wonder about her prancing about in her nightgown in the middle of the night, waving around a flashlight out there on the front lawn, for all to see. It's like the Theatre of the Absurd, for sure.

Okay, maybe not quite absurd enough for that but getting pretty darned close, if you ask me. MOUSES!

"Hang on Seville.  I'll open up the upstairs bathroom window for you," and with that, the peep disappeared backstage.  I mean, into the house. MOUSES!

Next thing I knew, there where beams of light emanating from behind the house.  They were swaying this way and that, like landing bay lights.  Of course, my first thought was... ALIENS.

Then I realised the bright lights were more likely to be of the peep's doing than an alien mothership landing.  I wasn't absolutely positive or anything like that but it was the more probable scenario of the two.  Just to be on the safe side though, I grabbed the roll of tinfoil I keep stashed up on the roof for just such occasions, before forging ahead.

Always be prepared, I say.  Always be prepared by keeping a roll of tinfoil on paw.  Everyone should, you know.  It's the only way of which I know to keep aliens from reading your mind, you see.

"Once more unto the breach!" I cried before climbing to the peak of the roof, tinfoil in paw.  I peered into the great abyss that is the backyard and that's when I saw it.   That's when I saw Peep #1 hanging out of the bathroom window with a flashlight in her paw and calling my name.  "Not so loud!" I called to her.  "I don't need the whole neighbourhood knowing I got myself stuck up on this here roof.  MOUSES!"

But the peep being the peep she is, kept on calling my name and waving that darned flashlight around in the air like a crazy person.  I hopped down onto the catwalk that runs along the back of the house, between the upstairs and downstairs levels, and made my way over to the little sunroom roof from where I could easily climb through the bathroom window.

"What took you so long?" I asked the peep.  "I was stuck up there for ages and being a cat, all time is multiplied by nine - on account of our supposed nine lives, you see - so ages for me is like nine times longer than it is for you."

The peep just gave me a blank stare.  She had clearly not been wearing that tinfoil hat I made for her to use when out and about in alien territory.  What most likely happened is that after having read her mind, aliens must have wiped it clean which, I think, explains a great deal.  MOUSES! 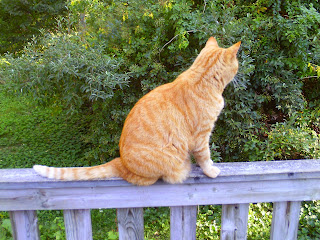 And speaking of wiping things clean, at that point I allowed the peep to pick me up and give me a cuddle which allowed me to wipe my paws clean on her nightgown.  The cotton fabric works exceptionally well for such purposes, I have found.

With my coming inside the house, the peep's little menagerie was once again complete so she closed the glass bathroom window before heading off to bed.  I, on the other paw, went searching for snacks like any cat who had been stuck up on a hot tin roof for nine times longer than ages would be expected to do even if said roof was neither hot nor made out of tin.

And about those aliens, you ask?  Sometime soon, my friends, I shall tell you more about them. MOUSES!

Posted by Seville at Nerissa's Life at 19:03

Email ThisBlogThis!Share to TwitterShare to FacebookShare to Pinterest
Labels: A Streetcar Named Desire, Cat on a Hot Tin Roof, cats, humor, humour, MOUSES!, The Glass Menagerie, Theatre of the Absurd