the toaster, the vacuum and the nip mice 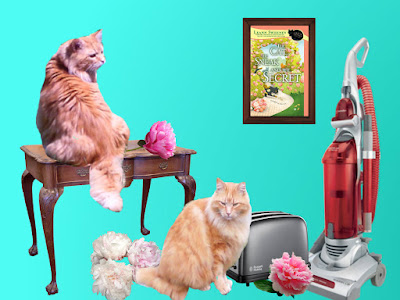 Seville stood outside his office door and listened to the conversation going on inside.  He twitched an ear, angling it in such a way as to allow him to hear better.

"How about a toaster? We could give them a toaster, Rushy.  Bet the peeps might even have one on paw which would save us buying one."

"Nope, I think Jillian already has a toaster, Anderson.  I'm not sure why I think that but I'm pretty sure she does and no one really needs two toasters.  How about a vacuum, instead?"

"Nah, she probably has one of those, too.  With three cats living in her house on a permanent basis and a fourth visiting - not to mention Finn's dog - she must already have a vacuum and NO ONE needs more than one of those, Rushton.  I think we should get her some nip."

"You mean like a big bag of catnip, Andy?  Do you think Jillian likes the nip?"

"You have a point there but...  But what if we dressed it up a bit.  Gave her some nip mice or something.  I mean, nip is good.  No, nip is great but nip mice are even better.  We could ask the peep to knit some up."

"Oh!  OH!!  OH!!!" Anderson jumped up and down with excitement.  "I know, we could give her quilted nip mice.  Jillian loves to quilt, right?  Making quilts for cats is her business.  Bet she'd LOVE some quilted nip mice.  Maybe in a pretty floral fabric?"

"What the mouses is going on in here?" Seville demanded as he flung open his office door.  "I thought I left you two to finish up your book reports for Professor Lyon's Kitty Lit. course."

"We're working on them," explained Rushton.  "Just trying to figure out what to give Jillian and Tom as a wedding gift.  A cat can't go to a wedding empty-pawed."

"Wedding?  WHAT THE MOUSES?"

Anderson looked quizzically at his brother and asked, "Did you not realise Jillian and Tom were getting married, Seville?  It was mentioned several times in the book.  You know, the book The Cat, The Sneak and the Secret by Leann Sweeney.  The book Professor Lyon assigned us.  Did you not notice the references being made to wedding preparations and the fact that Jillian was looking forward to getting married and..." 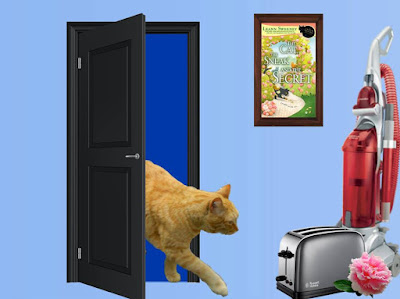 "And how come you were sneaking about in the hallway, listening in on our conversation, Seville?" interrupted Rushton.

"YEAH, why were you listening in on our secret conversation?" asked Andy.

Seville stared at his long-haired marmie brothers. "First of all, I wasn't sneaking about.  I was standing outside MY office door.  And secondly, if you want a convo to be a secret, I suggest you keep the volume down a bit.  You apparently have sneaking and secrets on the brain.  MOUSES!"

Rushton wriggled his whiskers.  "Well sneaking about is kind of fun."

"As is keeping secrets," added Anderson with a smirk.

"Yeah, it's all fun and games until somebody gets themselves murdered," Seville stated matter-of-factly.  "Either of you two wedding planners happen to write about murder in your book reports or were you too wrapped up with the wedding gift debate?"

Rushton laughed.  Then he laughed some more.  He laughed so hard that he leaned back too far on his haunches and lost his footing, causing him to roll onto his back.  "Good one, Andy!" he managed to sputter between fits of giggles, thumping his tail on the floor.

"Awww...  MOUSES!" Seville rubbed a temple with a paw.  "I knew asking these two to join me in taking the Kitty Lit. course would be trouble."

Pulling himself together, Rushton asked with a worried look, "Seville, do we need to wrap up the quilted nip mice for Jillian and Tom?  Peep #1 keeps all the wrapping paper and ribbon under lock and key now.  She says we're not supposed to play with that stuff anymore."

"Actually," Anderson began, "she says you're not allowed to play with it anymore but a closed door or drawer never stopped you before.  You can be like Magpie, in the book.  She was able to find all sorts of stuff that was hidden away, the little thief."

"I AM NOT A THIEF," Rushton said, stamping a paw.  "Oh sure, I can open the kitchen window and I have been known to pull open the cutlery drawer, too, but I've never stolen anything.  Come to think of it, I don't think Magpie was stealing, either.  I think she was searching for clues."

"Well she certainly did manage to find some!" Anderson nodded in agreement.  "One of the trinkets she brought home even led Jillian and Tom to a murder in the book."

Seville looked from one brother to the other before asking, "So we're back on topic, now?  No more wedding present talk?"

"WEDDING PRESENTS!" cried Rushton.  "Oh my gosh, we need to get Peep #1 working on those quilted nip mice right away.  Might take her a while.  I don't know if she knows how to quilt."

"And you'll need to sneak some of the wrapping paper and ribbon out of the closet so we can wrap up those mice once she's made them, Rushy," added Anderson. 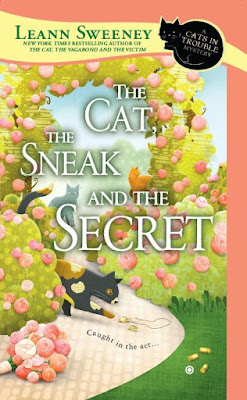 Seville closed his eyes, secretly hoping that when he opened them, he would discover this entire conversation was nothing but a bad dream.  Having no luck with that wish, he explained to his brothers, "We're not actually going to the wedding, guys. The wedding is just in the book.  It's not real.  It's part of the story-line."

Anderson sat lost in thought.  "Hmmm...  If we're giving quilted nip mice to Tom and Jillian as a wedding present, we had better make sure there are enough to share with Magpie, Syrah, Merlot and Chablis.  Wouldn't be fair to leave them out."

"What about Finn's dog?" asked Rushton.  "Should we give one to Yoshi, too?"

"Do you mean there isn't going to be a wedding after all?" asked Rushton, his voice revealing disappointment.

Anderson padded over to Seville and touched him gently with a paw.  "Don't worry, Seville.  We'll put your name on the card, too.  The quilted nip mice will be from all of us.  We won't leave you out."

Seville slowly rose to all four paws.  "Have you put anything down on paper at all?  Have you written any part of your book reports?  Do you have anything to hand in to Professor Lyon tomorrow?"

Anderson and Rushton looked at each other before answering in unison, "Well..."

"Well what?" Seville asked expectantly.  "Did you write about how a body was found?  How someone had died under what were clearly suspicious circumstances?  How long-held family secrets in a small town led to a murder?  How the murderer attempted to frame someone?  And how it was up to Jillian and Tom to discover exactly who the real killer was?  To try to figure it out before the murderer struck again?"

"And Magpie, too!" interrupted Anderson.  "Magpie helped figure out about the murder, as well."

Seville grinned from ear-to-ear.  "So you did write your book reports.  And you included Magpie and how she helped solve the crime."

Rushton pawed at the ground nervously.  "Ummm...  I think he just means that Magpie was involved in the investigation.  I don't think Anderson means that he actually wrote about her helping because uh...  um...  Well because neither of us have started the writing part of our book reports yet.  We're still working on these wedding presents, you see."

"THERE IS NO WEDDING!  THE WEDDING ISN'T REAL!  IT'S JUST IN THE BOOK!"  Seville hollered. 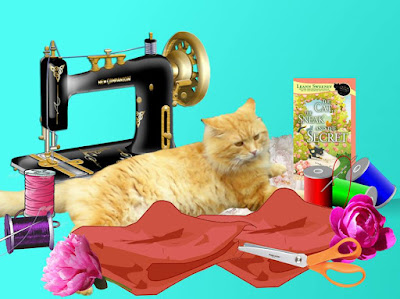 "But Leann Sweeney writes with such conviction, Sivvers, and creates such memorable characters,"  Anderson explained.  "The wedding has to be real.  Reading the book makes you feel like you're right there in Mercy.  Jillian and Tom become kind of like your friends - maybe even your best friends - so, of course, you want the best for them because they're so nice and so...  well, so real.  The wedding has to take place.  It just has to. They can't cancel it. They can't!"

"Do either of you even know what a book report is?" Seville asked, a quiver evident in his voice. Hearing no answer, he turned and stomped out of his office.  "Mouses!  MOUSES!!  MOUSES!!!" Seville muttered under his breath.

"Okay then, enough of that," and Andy waved a paw dismissively.  "So we're definitely going with the quilted nip mice, right Rushy?  Now let's talk colours.  I say pink.  Jillian is having pink peonies at her wedding.  She clearly likes the colour pink.  Pink quilted nip mice will be beautiful."

The Cat, the Sneak and the Secret is the seventh book in the Cats in Trouble Series written by the National Bestselling Author, Leann Sweeney and published as an Obsidian Mystery, a trademark of the Penguin Group.  Connect on-line with Leann through her website, Leann Sweeney, Facebook page Author Leann Sweeney or on Twitter at @LeannSweeney  The cover picture of Leann's book was used with the permission of - you guessed it - Leann Sweeney.

Posted by Seville at Nerissa's Life at 19:31