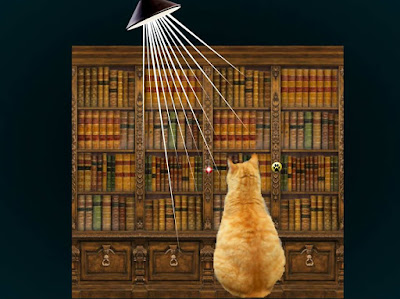 It was a hot and muggy summer night.  An owl could be heard outside, hooting as owls like to hoot and the noise awakened Seville with a start.  He stretched, letting out a huge yawn. "Think I'll go get a drink of cool water or something," he thought aloud.  "Might need to use the litter box, too."

Making his way down the upstairs hallway, Seville stumbled when his paw hit a metal object lying on the floor.  He squinted in the moonlight streaming through an open window.  "MOUSES!  What's this laser saw doing in the middle of the hallway?  Didn't even know the peep had one of these.  Gosh, I sure could use a laser saw, myself.  It would come in handy when I'm working on building teleportation devices."  Placing the laser saw next to the wall, Seville made a mental note to collect it after getting his drink and using the box.

A moment later, Seville stumbled again.  "What the...?  Oohhh...  Some sort of subspace audio transistor thing-a-ma-gig.  MOUSES!  Where is the peep getting this stuff?  She must have a stash of it stashed away somewhere.  I bet I can make use of this, too," and he propped the subspace audio transistor thing-a-ma-gig up against the wall, next to the laser saw.

Almost at the top of the stairs, Seville stumbled once more.  He fell forward and his attempt to catch himself, failed.  Seville's back legs were tossed up into the air and he somersaulted forward not once, not twice but three times before finally landing with a thud against the bookcase at the end of the hall.  With all four legs splayed out against the bookcase, he felt a warm sensation under his right front paw.  Then seemingly from behind the bookcase came a gentle whirring noise followed by three sharp clicks.  Managing to gain his footing, he backed away from the bookcase, only to find a golden circle marked with a paw print where his paw had been resting. "That's new. MOUSES!"

Seville examined the circle and paw print from all angles.  He then discovered, over to its left, a small flashing red light.  Thinking he might have found the secret home of the illusive red dot, Seville looked even more closely. Closing one eye, he pressed up against the bookcase and squinted into the light.

Suddenly a red laser beam appeared, shining directly into his open eye.  Then he heard a vaguely familiar, soft female voice stating, "Retinal scan, complete."  Before Seville knew it, a bright light was shining down upon him from the ceiling and the same soft voice stated, "Cat scan, complete. Identity confirmed."

Then before Seville's very eyes, the entire bookcase slid to one side, exposing an open doorway he had never before seen.  Cautiously, Seville stepped though it only to hear a noise behind him.  The bookcase had slid back into place, trapping him inside.

Seville realised he had entered a large room.  The lighting was low but the glow of several dozen screens lit up the far wall, streaming what appeared to be news feeds from around the world.  In front of the wall was a long desk and sitting at that desk with books and papers scattered all about her, was a familiar figure.

"MASON, what the mouses are you doing?" Seville asked his sister.

Mason spun around.  "There you are, Sivvers.  Welcome to the Situation Room." 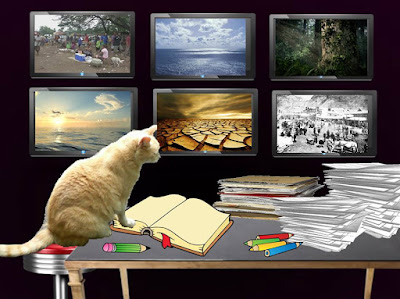 "And you're just in time, Seville," Mason breathed with a sigh of relief. "There's a report of a developing situation off the coast of Prince Edward Island.  We have intel that the Weasel Syndicate has intercepted a shipment of stainless steel whisks."

"They've what?" Seville cried.  "How big was the shipment?  What are those moused-up weasels planning to do with..."  Seville stopped mid-sentence.  "Uh Mason, exactly how much do you know about whisks and weasels and syndicates and stuff?"

"I know enough.  What's more, I know that those whisks are necessary for your experiments with time travel, Seville.  I also know that the Weasel Syndicate is bad news.  You may not have known it but I always kept a close eye on you and Nissy with your experiments in eggbeater-whisk time travelling-teleportation physics.  Not to mention your adventures."

"If it weren't for me, Seville, you and Nissy would never have been able to do all that you did.  I kept my distance, always staying in the background but I was watching, nevertheless.  Watching and running interference between the two of you and the peeps.  Now with Nissy gone," and a tear ran down Mason's cheek, "I'll have to take a more paws-on approach.  That's why I built this Situation Room where we can work privately and without peeps getting in our way."

"It's pretty impressive, all right," and Seville gazed about the room.  "But I'm betting an open time vortex in this place could cause a few problems.  Time vortexes and news feeds tend to be incompatible.  Believe me, I speak from experience.  Where can I work on the actual teleportation devices?"

Mason smiled from ear to ear.  "Got that covered.  I'm in the process of building you a little lab downstairs but I've misplaced my laser saw.  Need that to finish the job.  You haven't seen a laser saw lying about, have you Seville?"

"A laser saw?"  Seville crossed his claws behind his back.  "No...  I haven't seen one of those. Awww...  MOUSES!  I can't lie to you, Mason.  Found a laser saw in the hallway a few minutes ago. Thought it belonged to the peep."

"What the mouses would Peep #1 be doing with a laser saw, Sivvers?  You know darned well the peep can't handle technology like that.  BOYS!  They never think things through," and Mason stomped out of the Situation Room only to return, seconds later, with the laser saw in tow.  Opening her mouth, she spat out the subspace audio transmitter thing-a-ma-gig Seville had found earlier, too. "Didn't happen to mention finding this, huh?" she asked of her brother.

"Well uh..." and Seville pawed at the floor.

Mason pursed her lips.  "Never mind, we need to get down to business at paw.  Like I said, we have intel that Weasel Syndicate operatives have intercepted a shipment of whisks off the coast of Prince Edward Island.  The whisks are high-quality stainless steel.  Perfect for time travel, I do believe.  Only one of two reasons those weasels would want whisks and neither one is good..."

A loud bell rang several times and a large calico cat's face appeared on one of the screens on the wall, interrupting the feed that had been previously displayed.  Mason grabbed Seville by the paw. "Sit up straight," she hissed.  "That's the Director's personal line.  And for goodness sake, stop flicking your tail."

Seville sat up as straight as he could, tucking his tail beneath him.  "Director of what?" he asked Mason in a whisper."

"The IFIA," Mason hissed in reply.  "Stands for the International Feline Intelligence Agency.  I signed us up."

"They have operatives everywhere, tracking all Weasel Syndicate movements across the globe. Where else would the intel about the whisks have come?" Mason rolled her eyes.  "I've said it once and I'll say it again, boys.  Now pay attention.  HELLO THERE DIRECTOR PATCHES," and she raised her voice, clearly talking to the cat on the view screen.

Seville listened in while Mason spoke with the the IFIA Director, trying to make sense of his late-night discoveries when all of a sudden he realised that he never had gone to use the litter box as he had earlier planned.  He began to rock from side to side causing Mason to kick him with a back paw.  Then he tried to think of dry things like deserts but thinking of deserts made him think of sand which made him think of sandboxes which, of course, caused him to envision a giant litter box.  All of a sudden he burst into the conversation yelling, "I GOTTA GO PEE!  Nice meeting you your... Directorship.  GOTTA RUN!!!" 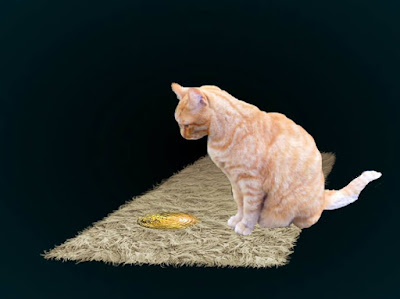 Mason watched Seville run from the Situation Room.  Turning back to Director Patches, the two cats locked eyes before both crying in unison, "BOYS!"

In the meantime, Seville headed downstairs at full-speed, trying to make it to the little boys room before it was too late. "Awww...  MOUSES!" he suddenly cried.  "Man, that's gonna stain I bet," and he scratched the back of his head and behind an ear.  "I had best not tell the peep it was me."

Posted by Seville at Nerissa's Life at 17:27